10 Ways Male Privilege Shows Up in the Church 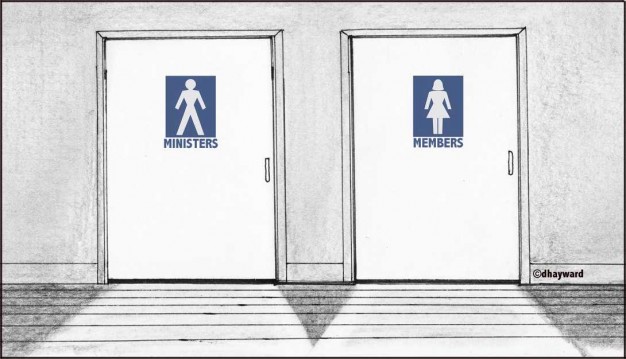 “You’re a white American male with a college degree. The world is your oyster – don’t ever forget that!”

I’ve been thinking a lot about male privilege lately. Well, not just lately. I overheard that conversation at a Starbucks in Washington, D.C. more than a year ago, and it still haunts me. The Oxford Dictionary defines privilege as “a special right, advantage, or immunity granted or available only to a particular person or group”. Simply put, privilege has to do with how groups in society accommodate and cater to you.

I think many Christians are becoming more aware of racial and class privilege, but I don’t see the same level of awareness about male privilege.

Over the past few months I’ve had several conversations with male friends who disagree that they are “privileged” in their communities of faith and that women are at a disadvantage as a result. I had been praying and mulling over how to break through this impasse when I came across The Male Privilege Checklist. There are a lot of these lists floating around, but this one had a lot of examples that I think are also true in church contexts. I’ve rewritten a few from my vantage point as a woman in the conservative evangelical church.

1. A person’s male privilege is reflected the second he wonders why people are still talking about gender.

It is reflected even more if he acts offended or annoyed when another person calls out and questions that male privilege. “We should all look past gender” is a statement often made by someone for whom gender is not a daily issue or negotiation.

2. Male privilege means never having your intelligence or qualifications questioned because of your gender.

It probably won’t be assumed that you aren’t good with money, that you’re more easily deceived, or that your ability to make important decisions is dependent on what time of the month it is.

3. If you apply for a pastoral staff job, you can be sure your gender won’t be an issue.

4. If you perform the same task as a woman, chances are people will think you did a better job even if the outcomes were the same.

And if you preach a Sunday message, you can be sure that your entire sex will not be put on trial (and you won’t have to worry about where to put the mic pack or the message your wardrobe sends).

5. The governing boards of your church and denomination will be composed mostly of people of your same gender.

The odds are 10:1 that the senior pastor, associate pastor, worship pastor, and board chair will be male as well. Every time you attend a service you will see people of your own gender widely represented on the platform.

6. As a man, you are more likely to be trusted with responsibilities, even if you are new to the church.

7. When you attend church meetings you can be emotional or assertive without being thought of in a negative light.

You are more likely to receive eye contact from men in the group, and on average, you will not be interrupted by women in a meeting as often as women are interrupted by men. You probably don’t worry about going to your car in the church parking lot late at night alone.

8. Male biblical characters will be featured as primary subjects and positive examples  90% of the time in the educational curriculum.

9. You can be confident that the language used in all aspects of corporate worship will clearly include you.

This will be true of any scripture that is read (regardless of the translation used), the quotes that are cited, and the worship songs that are selected. You will not be expected to translate or interpret when gendered pronouns do or do not apply to you.

10. God will be pictured as male and described in masculine terms 90% of the time.

I recognize that there are situations in life in which men are also disadvantaged, and know that the fact that male privilege exists does not mean that a man’s life is carefree. But the reality is that when one group is privileged over another, the other group suffers and we are not fully living out the gospel message. While it’s encouraging to see more and more men advocating for the full inclusion of women in the church, we still have a long way to go.  I believe that for the most part men have good intentions towards their sisters in Christ.

But brothers, until you acknowledge your male privilege and the impact it has on us, it’s hard to have a productive conversation about what we can do to make the Kingdom here on earth look more like the Kingdom of Heaven.

The Junia Project is blessed to have some amazing male advocates speak up on the blog. We’re thankful for Brandon Chase, Bob Edwards, Tim Evans, Tim Fall, Dominique Gilliard, David Hayward, Mark Kubo, Patrick Mead, Tim Peck, Nicholas Quient, Rob Dixon, Sean Thompson, Sam Vaudrey, Larry Walkemeyer, Brian Wiele. Thanks for recognizing your privilege and for living out what it means to be one in Christ (Galatians 3:28).