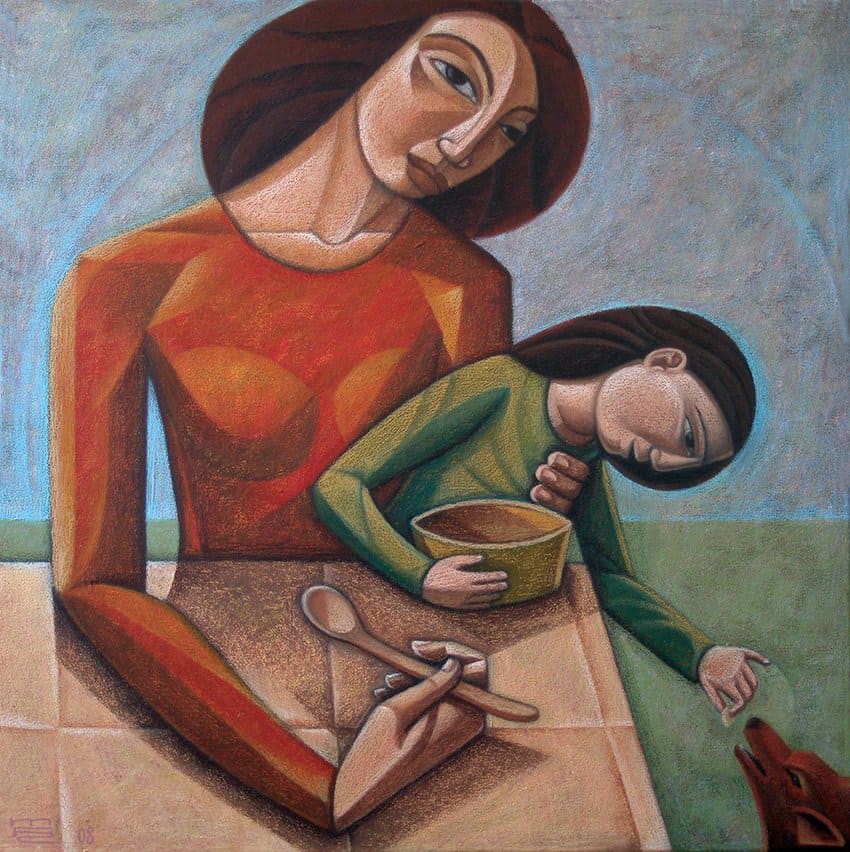 Our church had decided to do a sermon series on “Power Dynamics” and I knew immediately that I wanted to talk about gender in the Bible. I decided to unpack one of the many gospel stories of Jesus interacting with women. But which one was worthy of my efforts?

As I perused the books on my shelf it didn’t take me long to find my story in chapter 1 of Back to the Well: Women’s Encounters with Jesus in the Gospels written by Frances Taylor Gench [1]. It was the story of the Canaanite woman.

With her expertise as a New Testament professor, Professor Gench told this story in a way I had never heard.  She pulled back the curtains on a story of power dynamics that made me love Jesus even more because of how he shared his power with this woman.

So the following is an edited version of her story that I included in my sermon. It contains the main nuggets from Gench’s chapter but if you want a more thorough exegesis, it’s worth getting her book.

If there was one man women should consider to be our greatest ally and champion, that man would be Jesus.

Jesus was subversive to patriarchy. He showed great respect to women and included them in his mission and ministry. Often he praised their faith as greater than his male disciples. Jesus engaged women in theological discussions and protected them from abusive practices.

But there’s one story, the encounter of Jesus with the Canaanite woman in Matthew 15: 21-28, that would be a head-scratcher if you were honest about Jesus’ behavior.

Leaving that place, Jesus withdrew to the region of Tyre and Sidon. A Canaanite woman from that vicinity came to him, crying out, “Lord, Son of David, have mercy on me! My daughter is demon-possessed and suffering terribly.” Jesus did not answer a word.

So his disciples came to him and urged him, “Send her away, for she keeps crying out after us.” He answered, “I was sent only to the lost sheep of Israel.”

The woman came and knelt before him. “Lord, help me!” she said. He replied, “It is not right to take the children’s bread and toss it to the dogs.” “Yes it is, Lord,” she said. “Even the dogs eat the crumbs that fall from their master’s table.”

Then Jesus said to her, “Woman, you have great faith! Your request is granted.” And her daughter was healed at that moment.

Most people who read this story feel a bit uncomfortable. You have to admit Jesus’ behavior is puzzling and he doesn’t sound very nice!

First, he gives the silent treatment to the woman who the disciples later describe as crying out from behind them as they’re probably trying to get to their destination. The Greek suggests she is screaming continuously. She is desperate for Jesus to heal her daughter! Yet it looks like Jesus is ignoring her.

You get the sense that the disruption happens over a bit of a distance until the disciples finally get so annoyed they ask Jesus to send her away. He doesn’t dismiss her outright but his answer sounds dismissive. Jesus gives his reason for not giving her what she wants. “I was sent only to the lost sheep of Israel.” In essence, Jesus makes it clear that the woman exists outside the target of his mission. By this time you should really be feeling uncomfortable.

Upon hearing his statement, the woman moves quickly and blocks their path by kneeling in front of Jesus in a posture of humility. The Greek verb proskyneo, “to kneel,” can also mean, “to worship.” She pleads once more, “Lord, help me!” as she prostrates herself. In his third response he rebuffs her again and this time it sounds like an insult. He calls her a dog!

A lot of ink has spilled trying to explain Jesus’ behavior. Some have tried to soften the tone by saying the word for “dog” has a form that could mean “puppy.” It doesn’t matter. It’s still a dog.

In the Old Testament, dogs and their behaviors were used as metaphors for those who were hostile to God’s people, for fools or for lazy, incompetent watchmen [2]. Goliath, offended that puny David was sent as the challenger for Israel, said, “Am I a dog that you come at me with sticks?”[3].

In all of these metaphors, being called a dog was not meant to be a compliment. It’s no different in this story. The use of the metaphor of children throwing food to the dogs clearly identifies the dog as the lesser of the two creatures.

Also, Matthew describes the woman as being a Canaanite [4], which is odd because by that time in Roman history, the Canaanites as a people group, the former enemies of Israel, no longer existed. The connection between the identification of the woman as a Canaanite and the comparison to a dog is intentional by Matthew.

There’s no way around this. Jesus appears to insult the woman.

By now you should be really squirming. But then again you’d have to figure out what to do with Jesus in other passages like the time he tells Peter, “Get behind me, Satan!” Or when he calls the religious leaders, “You whitewashed tombs!” You could look at it this way: what we might call rude in our current culture would be considered direct in Jewish culture.

Maybe he was only testing the woman’s faith, whether rude or direct, and his intention all along was to heal her daughter. Then what a cruel thing to say to a desperate mother!

But perhaps there’s another way to understand this story.

At this point, his third response normally would have been the end of the story. In the gospel narratives, there’s an interesting pattern of threes, with the third being the final word or resolution.

In the story of the Good Samaritan, he is the third to come across the injured Jew and he becomes the hero. When Jesus is tempted in the wilderness by Satan, he is taken to three places to be tempted, and then his ordeal ends.

But here Jesus’ third “no” to the woman is not the end of this story. Get this: the woman outright disagrees with Jesus and pushes back with a final argument. She basically says, “Jesus, you’re wrong! Even crumbs fall from the table for dogs!”

In a reversal of pattern, it’s the Canaanite woman, not Jesus, who delivers the final punch line. And her counterargument flips the script. Jesus changes his mind!

One NT scholar, Joanna Dewey, wrote this about the unique encounter:

“The narrative portrays Jesus being bested by a woman and changing his behavior on that account. This is the only instance in the extant tradition of Jesus being taught by someone, and that someone is a woman who should not properly be speaking to him at all.” [5]

Jesus held all the power.

He was a male and an Israelite. And then he held the ultimate power card: he was the Lord, son of David. He might have had a specific mission.

But so did the woman.  She used her voice, her posture, and her creativity to interrupt Jesus and push back on his refusals. She challenged his mission.

He never once used his privilege to dismiss her but he did create the space for a dialogue of give-and-take, of resistance and counter-resistance. And in that space, he gave her the power to change his mind.

If Jesus created space for dialogue, shouldn’t also the church?

Shouldn’t the church encourage a kind of environment where there is dialogue between women and men, where there’s an exchange of give-and-take, of learning and changing minds?

Shouldn’t the church be a place where it’s both safe to challenge and safe to submit because there is no power over, only power with?

If it could be that kind of place, not only would patriarchy be dismantled, but also both women and men would thrive, and the church’s mission would get back on track.

Just as Jesus’ mission did because of the challenge from a desperate Canaanite mother.

Patreon
Posted in General, Women and the Bible
Tagged as Canaanite woman in the bible