My long-time friend Karen Dabaghian linked to a Huffington Post slide show depicting men in poses mimicking those of a model in a recent photo shoot. As the HP article explains, after the photographer finished shooting a female model with a Ducati 1199 Panigale motorcycle at a Portland dealership, the men who work there turned the camera on themselves. The resulting side-by-side shots will change the way you look at models, mechanics, or motorcycles, or perhaps even all three.

The photos caused me to reflect on how we view men and woman in the body of Christ. Are we bound up in gender roles to the extent that as long as a woman is not taking on what men are supposed to do and vice versa, we are going to look the other way when it comes to excesses? That’s how some people see the modeling in those photo shoots. A female model poses awkwardly – yet seductively – in order to sell a piece of mechanical equipment designed to move a person from one location to another and that’s ok, but if a man does it then it’s not at all ok.

In some churches, people see women and men having such divergent and separate roles that a man taking on a woman’s “job” is looked at oddly. Relegating women to the nursery, children’s ministry, serving food and similar chores is fine. But let a man work in the nursery or kitchen and not only is his masculinity questioned, the whole order of things is seen as being threatened.

Step back a bit, though, and you will see that it’s really not OK either way. It’s not just that men should not be discouraged from engaging in whatever work in the body of Christ they are suited for, the problem is compounded because relegating women to “women’s work” (as a friend once unfortunately called it) causes the church to see women as less valuable members of the church than men who do “men’s work”.

Here’s a visual example. When you look at the men in that photo shoot, your first thought might be that they don’t make very good models but they might if handled differently by the photographer. When you look at the original model in that photo shoot, though, is your first thought that women could make just as good motorcycle mechanics as the men depicted there? I doubt it.

That’s what often happens in the church. When women are seen only in traditional women’s roles, no one thinks of them as also capable of the roles supposedly reserved for men – teaching, preaching, elders, leadership. Some churches won’t even let women be ushers because that would mean leading a man to an open seat.

If I had to choose, I think I’d rather be posing awkwardly on a motorcycle wearing ill-fitting clothes than be in leadership in a church that restricts roles for women.

YOUR TURN: Tim suggests that when women are seen only in traditional women’s roles in the church, it it hard to envision them in roles typically reserved for men. Would you agree that this dynamic impacts our views of what women do in the church? Why or why not? 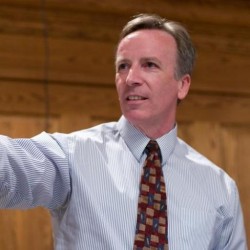 Tim is a California native who changed his major three times, colleges four times, and took six years to get a Bachelor's degree in a subject he's never been called on to use professionally. Married for over 26 years with two kids, his family is constant evidence of God's abundant blessings in his life. He and his wife live in Northern California. He blogs at timfall.wordpress.com.