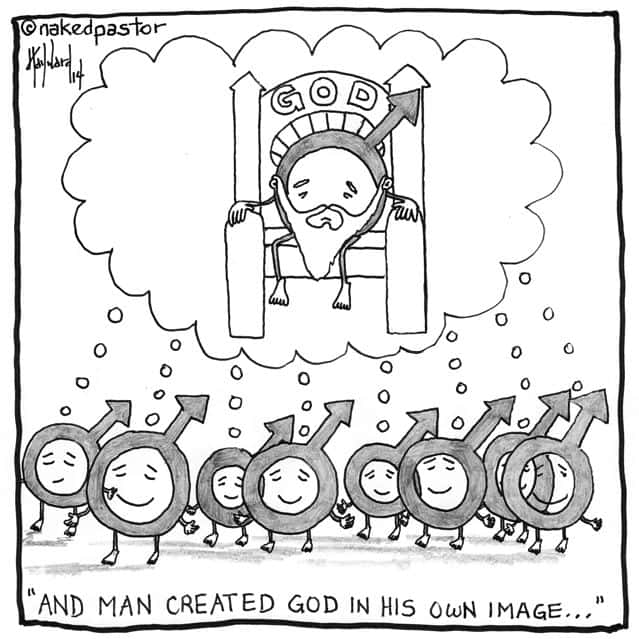 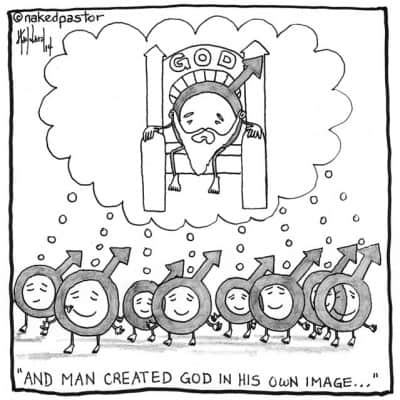 Last week Owen Strachan, prominent complementarian leader and President of the Council for Biblical Manhood and Womanhood, called Rachel Held Evans‘ teaching “heresy” because she used a female pronoun to describe God in one of her posts. Oh, and he did it over Twitter, so naturally a series of Twitter conversations ensued.

I personally love Twitter, so I scrolled down and read the various responses to Strachan’s #proclamation. The majority seemed to be in favor of using both female and male language in describing God, recognizing that God transcends gender. But a good number of tweets were written by people who were incredibly offended at any use of female language to describe God.

I was shocked. When did Christians get so caught up in God being male?

I mean, it took both male and female to represent the image of God in creation, God is described in both masculine and feminine ways in scripture, and the only name God seems to prefer above another is “I AM” – a name completely void of gender.

On Monday, he posted a blog on Patheos delving deeper into this idea that God should be addressed as male and calling out Rachel Held Evans once again for even thinking that using a female pronoun for God would be acceptable – but not before he disabled the comments on his post and blocked those who disagreed with him on Twitter.

I read through Strachan’s blog post. He is a smart man and he is my brother in Christ, but I adamantly disagree with him. His attitude toward women breaks my heart and his insistence on God being male makes me want to cry out:

Stop making God in your image!

The weird part is, I’m pretty sure the Apostle Paul dealt with a similar issue in one of the churches of his day. In fact, he wrote a letter to his good friend Timothy who was residing at that particular church.

You see, the church at Ephesus was elevating the feminine above the masculine. They were so influenced by their culture that Ephesian goddess worship and female hierarchy had trickled into Christian teaching. A group of women were teaching that from creation Eve was given a special position above Adam. Their focus on the feminine aspects of Christian teaching were overriding any masculine aspects, to the point of inaccuracy. And it was affecting their teaching and the life of their church and, I bet, the dignity of their men also.

And that sounds all too familiar to me.

Many groups in the Church today are elevating the masculine above the feminine. Some have been so influenced by our patriarchal culture that the idea of male superiority has trickled into Christian teaching. Complementarian teaching says that from creation Adam was given a special authority over Eve. This teaching almost exclusively clings to the masculine aspects of Christian thought and it has overridden any feminine aspects, to the point of inaccuracy. And it is affecting our teaching and the life of the church and, I know from experience, the dignity of women also.

Yup, we as a Church have seen this problem before – a Christian group elevating one gender over another, and claiming it is God who made it that way. In 1 Timothy, Paul called that group out and restricted their teaching. Which makes me wonder…

If Paul was alive today, what would he say to those like Owen Strachan and CBMW who are teaching this masculine Christianity? I wonder if it would be similar to what he said to that particular group of women in the Ephesian church. Perhaps it would sound something like this:

“Let a man learn in silence, with full submission. I am not currently permitting a man to teach or have authority over a woman; he is to keep quiet.”

Elevating one group of people above another in the name of God should never be accepted in the Church, and making God in our image, whether exclusively male or female, shouldn’t be accepted either.

Let us be free to speak of God as scripture speaks of God – in both masculine and feminine ways. Let us not lose sight of the diverse and unified community we were created for. Let us remember that we need each other.

And let us refuse to make God in our image.

“Therefore watch yourselves very carefully, so that you do not become corrupt and make for yourselves an idol, an image of any shape, whether formed like a man or a woman, or like any animal on earth or any bird that flies in the air, or like any creature that moves along the ground or any fish in the waters below.” – Deuteronomy 4:15-18

“In the Lord woman is not independent of man or man independent of woman. For just as woman came from man, so man comes through woman; but all things come from God.” –1 Corinthians 11:11-12

**IMAGE CREDIT: I want to say a great big THANK YOU to the talented David Hayward at nakedpastor.com for collaborating with me on this post by creating the amazing comic above! Check out his commentary to this comic HERE.