The New Wine of the Kingdom: Equality in the Church

YOU DRINK WHAT THE HOST IS POURING

I’m not much of a wine drinker and will admit to being a lousy judge of quality.  But I do know that you drink what the host is pouring. To politely refuse what is provided is reasonably understandable.  But to insist on being served a different blend – one that you prefer, and definitely aged longer – would be incredibly rude.

Yet that’s exactly what the church has done and continues to do to Jesus, the host of the table where believers sit, which we commonly call the Kingdom of God.

The parable from which Jesus’ statement comes is familiar fare. In response to a question about fasting, Jesus spoke of the folly of putting an unshrunk patch of cloth on an old garment.  Carrying the illustration further, he added that new wine must be poured into new wineskins; the fermenting process of a new spirit would cause an old leather wineskin to break apart. Only in Luke’s version do we have Jesus’ statement about the tendency to reject the new wine over one that is well-aged.

We’ve generally interpreted the parable to refer to religious actions such as fasting, Sabbath observances, or acceptable foods. But there are many ways in which Jesus was pouring a new spirit into the wineskin of his church. One of those areas has to do with power and position.

On the question of who gets to lead the church and how it should be structured, the church has stubbornly and insolently continued to drink the old wine of hierarchical rule and patriarchal dominance.  Put in plain language, men get to lead, and ought to do so from above those they rule over.

To which I would say… you drink what the host is pouring.

Jesus essentially said, “I’m pouring a new blend, one where both men and women lead, and they do it together”.  He was not subtle in his actions that expressed his wish. The gospels repeatedly tell us that he broke the time-honored practices of refraining from speaking to women or of making sure they did not listen to rabbinical teaching. In every way he treated females as equal to men, letting them touch him and anoint him, entrusting them with messages, and including them in his travels along with the original twelve disciples.

By his example, he poured out a new wine, a new way of understanding humanity, the crown of God’s creation. From Jesus we are relentlessly reminded that both men and women are created in God’s image; one does not stand above the other in importance, dominance, or culpability in matters of sin.

Jesus also modeled a new wineskin, a new structure of leadership for the Kingdom of God.  Again, both men and women are to work in community, side by side, not from the top down.  Our model for this is a relationship in which Jesus had thrived which we call the Trinity – Father, Son, and Holy Spirit.

Jesus even commanded his disciples not to drink the old wine of top-down authoritarian leadership.  In response to James and John’s admission of their hierarchical and egotistical longings, Jesus called the twelve together and made his will plain: You know that the rulers in this world lord it over their people, and officials flaunt their authority over those under them. But among you, it will be different. Whoever wants to be a leader among you must be your servant…. (Mark 10:42-43 NLT)

I wonder if Jesus advised his disciples that they would find this new wine a little difficult to swallow at first – it certainly wasn’t what they were used to! – but that over time they would come to love its distinctive difference.  Attempting some vintner-speak, gender equality has hints of the fruit of the Spirit, and reminds one of the Garden of Eden.

I’m convinced that the early church learned to drink and to love the new wine Jesus offered.  Certain events in the book of Acts combined with references in some of Paul’s writings give glimpses of women serving as deacons and apostles, prophesying and bringing messages (see Romans 16), hosting churches, and teaching men.  We know that women were present in the Upper Room at Pentecost, and there’s every reason to conclude that both men and women participated in the Jerusalem Council in Acts 15, a gathering in which an important leadership decision was made.

Yes, there were resultant problems in the young churches, as you might imagine, and Paul commonly wrote letters trying to help sort out these issues.  But it seems as though the church in subsequent years decided to listen to Paul’s teachings with their old, patriarchal ears, misinterpreting these passages so that they appear to defend the old wine of male leadership.

“I do not permit a woman to assume authority over a man”, the NIV translation has Paul saying in I Timothy 2.  That has been interpreted to mean that a woman can’t pastor a church, preach a sermon to men, or serve on an elder board.

But Jesus specifically said he was against the idea of any follower of his being in hierarchical authority over someone else – man or woman. It’s only when we’re drunk with power – the old wine is definitely much quicker for that – that we worry about who gets to call the shots and run the church.

Jesus said it would be different for us, so the long-favored traditional interpretation of this passage cannot be what Paul was addressing in his pastoral letter.  He was, in fact, advocating against top-down dominance in leadership; he was not recommending that gifted women be hindered from serving and speaking.

LET’S NOT REJECT THE NEW WINE FOR THE OLD

You drink what the host is pouring… but unfortunately, within a short period of time after the New Testament era, church leadership rudely refused to drink what the host had poured, and declared, just as Jesus had predicted, that the old wine of patriarchal dominance would serve the church just fine.

Catholic, Orthodox, Evangelical Protestant – the majority of the distinctive church families have continued to trot out their preferred vintage – sometimes with new labels on it like complementarian – and then audaciously decreed it to be the blend that Jesus preferred and recommended. They control the cellar, and their hierarchical vintage is thus the only one poured. As a result, anyone advocating that the church drink of the new spirit of equality is at best considered suspicious and liberal, and at worst divisive and heretical.

I’m convinced that Jesus poured a new wine – men and women, both created in his image – into new wineskins, a Trinitarian model of shared leadership.  Throw whatever labels you like at me, the refreshing blend of gender equality will continue to be served in my congregation. I’m drinking what was poured for me in order to honor the one who poured it, Jesus Christ. 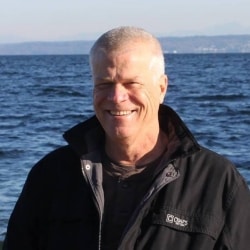 is Lead Pastor at River Ridge Covenant Church in Olympia, Washington, and serves as Chair of the Commission for Biblical Gender Equality for the Evangelical Covenant Church, which exists to equip the church to articulate the truth about Biblical equality regarding gender; and to advocate for women in ministry and leadership. He holds an M.Div. from Fuller Seminary.