The Women of Advent: Rahab 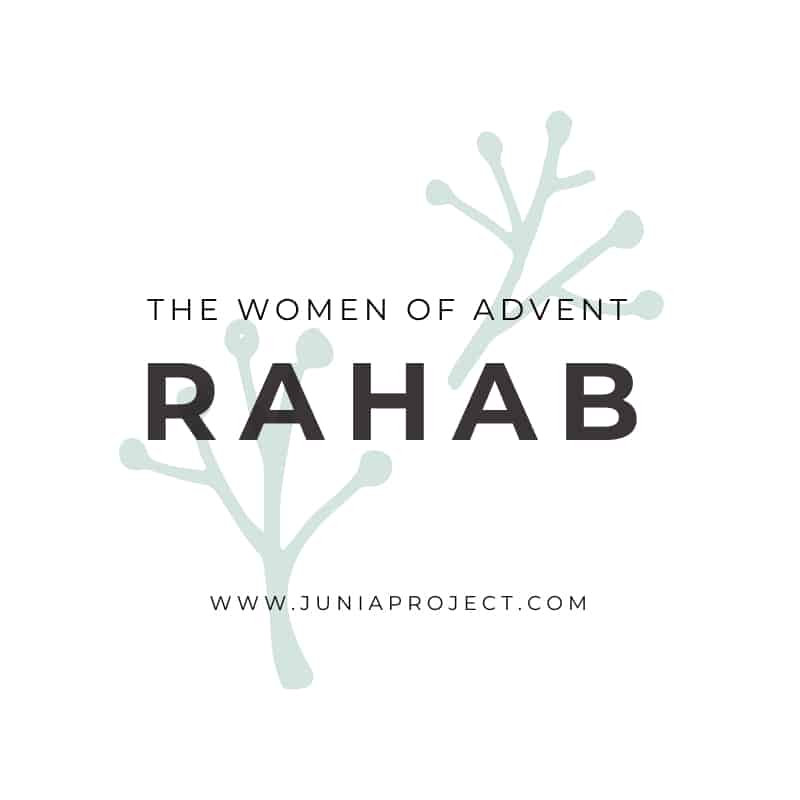 This post is the second in an Advent series on the women listed in Christ’s lineage recorded in Matthew 1: Tamar, Rahab, Ruth, Bathsheba, and Mary of Nazareth.

In the Christian tradition, we often assign nicknames to characters in scripture, such as “Doubting Thomas” and the “Virgin Mary”. These nicknames are not always a bad thing, but they do affect our understanding of certain characters and stories. For example, always describing Thomas as “doubting” brings negative connotations into stories in which Thomas doesn’t show signs of doubt. Likewise, perpetually understanding Mary as “the virgin” ignores the fact that she went on to have other children after Jesus (Matt. 13:55-56).

Nicknames can be helpful, but they can give us a simplified version of the story, and not necessarily an accurate one. This is important to keep in mind when learning about Rahab, because very few stories are as misunderstood, due to nicknames, as hers.

Rahab is commonly referred to as Rahab “the prostitute”. This isn’t surprising when we consider that scripture also calls her this, but it can be problematic. The difficulty with this nickname isn’t that it is incorrect, but that it limits our understanding of who she was.

In Christian tradition, the word “prostitute” is almost synonymous with “great sinner”.  “Prostitute” makes us think of a woman willfully selling herself in order to make a profit, but abolitionists will tell you that most of the time prostitution is not a voluntary industry. A more comprehensive view of prostitution includes the reality that most are victims of sex slavery. Perhaps “prostitute” should bring imagery into our minds about someone who is in bondage, not someone voluntarily living a “life of sin”.

Regardless of the circumstances, to focus on this as the primary indication of her identity misses the greater contribution she makes to the survival and history of Israel. Breaking free of the traditional view of Rahab allows us to learn afresh from the scriptures, and give us a fuller understanding of this ancestor of Jesus.  The Bible has quite a lot to say about this woman, whom Church tradition has often sidelined as a harlot.

Here are a few more nicknames that might be helpful.

Rahab had three strikes against her: She was a foreigner, a woman, and a prostitute. In other words, she was the epitome of the social outcast.

She is not someone who we would expect to defy a king, save Israelite spies, and play a part in God’s people taking the Promised Land. But this is exactly what happens. Rahab is the first occupant of the foreign lands to show loyalty to Israel and Israel’s God, Yahweh, and is welcomed in as a new member of the nation.[1]

Rahab’s story shows that God not only has a place for the socially marginalized and abused but God also raises them to do great things.

Frymer-Kensky observes that “the book of Joshua tells the tale of the entry into Canaan as a mirror image of the Exodus from Egypt”.[2] Throughout Moses’ life, women saved him, from the midwives who disobeyed Pharaoh, to his wife, Zipporah, who appeased God’s anger.

Similarly, Rahab acts for the spies as the midwives did for Moses when she defies the king’s commands in order to save them.  Further correlations can be drawn between the two stories as Rahab even hides the spies from the king’s men, as Moses’ mother hid him from Pharaoh.[4]

Rahab’s story reminds us that throughout the Old Testament, God uses women to protect the future of the nation of Israel.

In Joshua 2:8-11, Rahab declares that Israel will successfully take over the land of Jericho. The Israelites do not yet know this to be true, but her words bear weight and they carry her message back to Joshua. Rahab’s foretelling of the work of the Lord causes Joshua to move into action. Frymer-Kensky says it beautifully,

“The first prophet after Moses to announce to Israel the paths of her history, Rahab becomes the first oracle of Israel’s destiny”.[3]

When we adopt the understanding that Rahab was more than likely a victim of sex slavery, we get a very different view of her than tradition teaches.  Rahab would have been socially marginalized, not because of her own sin, but because of the abuses done to her.

It’s an interesting idea, and the more I learn about modern-day human trafficking, the more I believe that this would have been the situation.  She most likely did not initiate or willfully consent to the acts of prostitution performed, yet she would have had to carry the weight of other people’s sin, through social stigma, as if it was her own.

Who else in scripture knows that kind of pain and burden other than Jesus?  Jesus carried the weight of our sins on the cross as if they were his own. Furthermore, Rahab plays the temporary savior to Israel by protecting the spies, declaring their victory, and enabling God’s plan to move forward.

In these two ways, Rahab foreshadows the coming Savior, who will be one of her descendants, and who will bear the sins of the world.

RAHAB IN LIGHT OF ADVENT

Rahab is a courageous and clever woman, listed among Israelite heroes in Hebrews 11:31 for her faith, and mentioned in James 2:25-26 as an example of faith in action. Regardless of her nickname, this biblical heroine goes on to establish a family in the land of Israel, one that will continue for generations and will eventually include Jesus of Nazareth.

In Matthew 1 we read that one of Rahab’s descendants is Boaz, who marries the next woman listed in Christ’s lineage, Ruth. These stories prepare the way for the coming Messiah.

Did you know that you can support our volunteer work for as little as $5/month? Become a member of our Patreon community and get immediate access to the e-book “Women of Advent”, which contains the five posts in this series with reflection questions, weekly prayer themes, and an epilogue.