The Women of Advent: Ruth 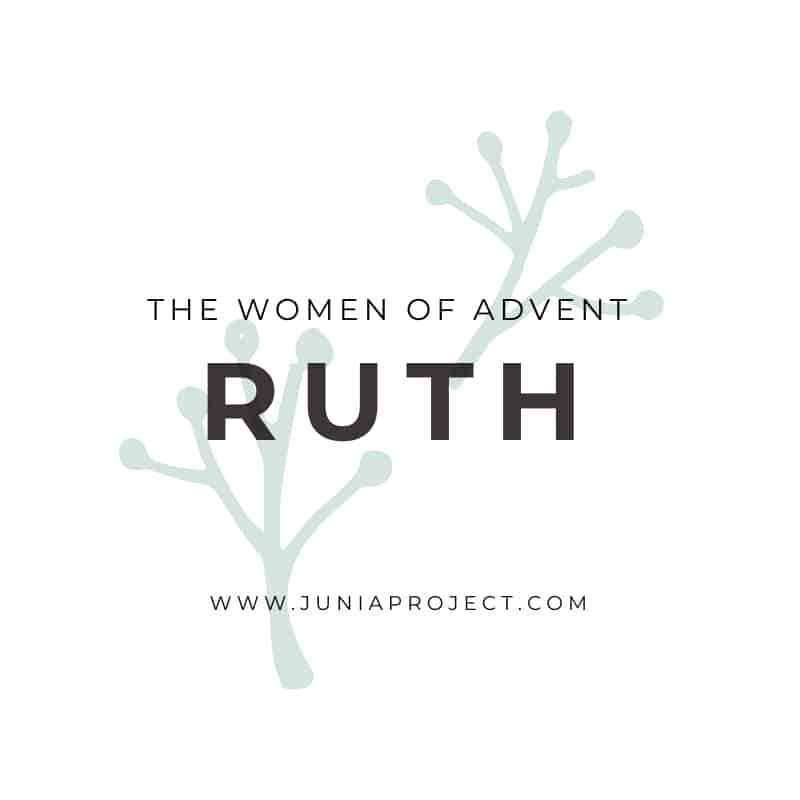 In this 5-part Advent series we look at the women in Christ’s lineage: Tamar, Rahab, Ruth, Bathsheba, and Mary of Nazareth. Read Ruth’s story in the Book of Ruth.

RUTH: A DRAMA IN FOUR ACTS

Ruth is the third woman named in the lineage of Jesus recorded in Matthew 1. Like Tamar and Rahab before her, Ruth “the Moabite” is not of Jewish descent, yet she plays a significant part in the history of Israel as told in the Old Testament Book of Ruth.  In Jewish tradition the Scroll of Ruth is read every year at the festival of Shavuot, and Ruth’s famous pledge to her mother-in-law Naomi (Ruth 1:16-17) is hailed as a model for faith conversion.  Ruth is essentially a drama in four acts, written by an unknown author. Here is a brief summary of the story.

An Israelite family (Elimalech, Naomi, and their sons, Mahlon and Chilion) moves from Bethlehem to nearby Moab to escape a famine.  The sons marry Moabite women, but tragedy strikes and all three women are widowed.  With no hope for a future in Moab, Naomi gathers her daughters-in-law, Orpah and Ruth, and they head back to Bethlehem.  This was no simple journey, but one that would have taken about a week, depending on the starting point. [1]

Along the way Naomi has a change of heart, and urges the younger women to return to Moab, releasing them from their marital obligations and giving them a second chance for a family in their own land.  Orpah takes her up on the offer and turns back but Ruth stays, pledging to Naomi “Wherever you go, I will go…your people shall be my people, and your God, my God” (1:16).

Although relatives of Naomi’s late husband still live in Bethlehem, no one comes forward to help the two women.  Ruth takes the initiative to save them from starvation by following the reapers in the fields to glean what was left behind and using the earnings to buy food. [2]  She ends up gleaning in a field owned by Boaz, a wealthy relative.  Boaz is impressed by Ruth’s loyalty to Naomi and takes an interest in her welfare, offering privileges and protection in the fields (apparently this was not the safest place for a woman to work).  Ruth gleans until the end of the harvest season, which means she worked the fields for about two months.

When the harvest season ends so does their source of income, and still no one in the family comes to their aid.  Concerned, Naomi instructs Ruth to go to Boaz privately at night to try and get him to agree to a marriage proposal.  But Ruth takes it a step further and petitions Boaz to take on the role of kinsman-redeemer; a tradition of taking responsibility for destitute relatives. [3]  Impressed by Ruth’s character and loyalty to Naomi, Boaz agrees to do both.

The arrangements are made with no small degree of diplomacy, since there is a closer relative who must be dealt with first and money is involved.  Ruth and Boaz marry, and have a son, making Ruth an ancestor of David, Israel’s most celebrated king.  The story ends with a host of blessings all around.

I’ve heard more than a few sermons on Ruth. Much can be said about her devotion to her mother-in-law, the role of Boaz as a kinsman redeemer, and the unusual interaction between Ruth and Boaz.  But in thinking about the story in light of Advent, I am intrigued by two other themes: the purpose of the genealogy at the end of the book and the prominence of the geography in the story.

THE GENEALOGY OF RUTH

While the Gospel of Matthew begins with a genealogy, the Book of Ruth ends with one:

“These are the descendants of Perez: Perez became the father of Hezron, Hezron of Ram, Ram of Amminadab, 2Amminadab of Nahshon, Nahshon of Salmon, Salmon of Boaz, Boaz of Obed, Obed of Jesse, and Jesse of David.”  Ruth 4:18-22.

I don’t usually find genealogies all that interesting, but this one gets my attention.  For one thing, we learn that only does Naomi’s family survive, it thrives once Ruth and Boaz are married, with just a few generations separating their story from that of the shepherd boy and king, David.

The genealogy also establishes that Ruth, Boaz, and their son Obed were from the tribe of Judah.  The preceding chapters describe Ruth’s conversion to Judaism, her reputation for being a woman of valor, and her marriage to Boaz. These are milestones that justify and validate her inclusion in the family history.  It is interesting that the Hebrew phrase translated as “a woman of valor” (eschet hayil) in Ruth 3:11, is the same phrase used in Proverbs 3:10 to describe the model woman.

Because Moab and Israel had a long history of conflict and intermarriage was frowned upon, some scholars believe that the genealogy is included to defend David’s right to the throne at a time when his legitimacy was being challenged. [4]

As Eskenazi & Frymer-Kenski note in their excellent commentary,

“…Ruth the Moabite is ultimately integrated into the Israelite community and is accepted by that community (the exclusion of Moabites in Deut. 23:4 notwithstanding) …By ending with David, the book celebrates the rewards granted to Ruth, Naomi, and Boaz because of their virtuous actions”. [5]

In a sense, the birth of Ruth’s son Obed symbolizes the reuniting of the families of Lot and Abraham.  The nation of Moab was descended from Lot’s son, and these families had been separated for many generations.  That is a story for another time, but it is not surprising that God choose Ruth “the Moabite” to be a participant in reconciliation.  In an important way, her story “functions as a counterpoint to the negative attitude toward Moabite and other foreign women in the biblical accounts of Ezra-Nehemiah”. [6]

THE GEOGRAPHY OF RUTH

When I visited Israel, I began to understand how the Book of Ruth relates to the greater narrative of the Bible.  Since Bethlehem is in the West Bank, our bus had to pass through “Rachel’s Crossing”, a guarded Israeli checkpoint.

Between the checkpoint and our destination, we passed through the suburb of Beit Sahur, which tradition holds to be the site of the angels’ visitation to the shepherds the night Jesus was born.  As we drove by a sign that said aptly “Shepherds Fields”, one of the professors leading our tour casually commented, “They say these are the same fields that Ruth gleaned.” All of a sudden the story came alive.  I could see Ruth in the fields, hands raw from the gleaning, back aching from the manual labor.  I was also struck by the realization that the choice to announce the Jesus’ birth in these fields was a demonstration of God’s compassion for the marginalized.  After all, many of the shepherds and the gleaners of Ruth’s time would have been at the bottom of the social and economic ladder.

Typically, we only focus on Bethlehem at Christmas time.  But this “little town” has big significance in the history of Israel.

Something about this consistency of the geography in the biblical narrative brings me comfort.  I think it’s the idea that God doesn’t give up on us, but keeps coming back to meet us in those places of need, giving us the opportunity to take our own place in the genealogy of the family of God.

“But you, Bethlehem Ephrathah, though you are small among the clans of Judah, out of you will come for me one who will be ruler over Israel, whose origins are from of old, from ancient times.”  Micah 5:2

Did you know that you can support our volunteer work for as little as $5/month? Become a member of our Patreon community and get immediate access to the e-book “Women of Advent”, which contains the five posts in this series with reflection questions and an epilogue.

[2] Ibid, p. 278. “Israel’s law mandated provision for the poor and destitute by allowing them to follow the reapers in the fields to gather what was dropped or left behind. This solution to a social problem required that the recipients work hard for their provision, and it therefore preserved the dignity that is sometimes forfeited by those who are entirely dependent on the generosity of others.”

[3] According to Leviticus 25:25, when a person became so poor that they had to sell or forfeit their property, a prosperous relative was to redeem or buy back the property for that family member. This person was called a “kinsman-redeemer”.  Apparently Naomi’s late husband still owned property in Bethlehem, and so Ruth went beyond seeking just a marriage proposal to remind Boaz of his responsibilities as a kinsman-redeemer to Naomi.

There are several significant themes in Ruth that are not addressed in this advent devotional.  For further study we highly recommend “The Gospel of Ruth: Loving God Enough to Break the Rules” by Carolyn Custis James.