6 Reasons to Include Women Elders on Your Church Board: Part 2 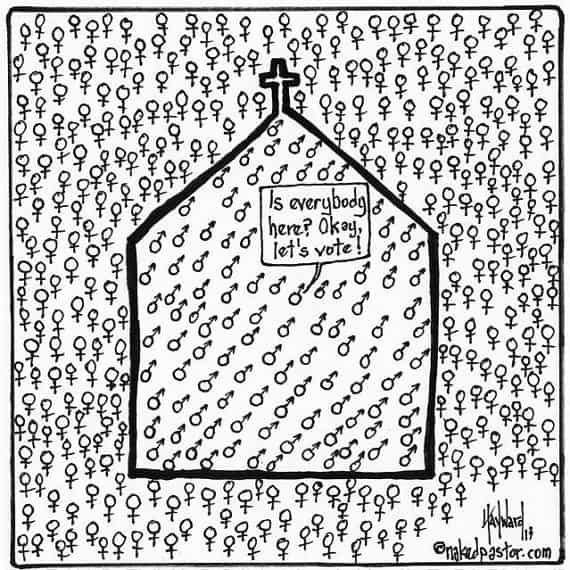 Part 1 discussed three reasons to include women at the highest level of board and elder leadership in your church: 1) spiritual gifts are not presented by Paul as ever being distributed by gender, 2) adding women elders strengthens the effectiveness of board oversight, and 3) women have leadership strengths that your board will benefit from.

In October of 2013 a bipartisan group of women senators played a key role in ending a 16-day U.S. government shutdown characterized by much political posturing, threatening, and name-calling. According to the Huffington Post, Senator John McCain (R-Ariz.) had this to say about the situation: “Leadership, I must fully admit, was provided primarily from women in the Senate,” and Mark Pryor (D-Ark.) commented, “The truth is, women in the Senate is a good thing,” he said. “We’re all just glad they allowed us to tag along so we could see how it’s done.”

This is an opportune time in history for churches who restrict women from leadership on church boards to reexamine their reasons for not including women elders at the table, and for churches who already hold this core value to reaffirm that commitment. So here are reasons four through six:

The Bible does not prohibit women from leading.

There is so much scholarship on this point that I can’t begin to do it justice. Here are some key points:

Jesus put the church on a trajectory towards reconciliation, including gender reconciliation.  Church polity and practice should be consistent with the overarching themes of unity, equality, and redemption that we find in the Bible. It is hard to understand how a male-only board meets that criteria.

Leadership models in the New Testament were fluid and functional.

Our ideas about early church governance are inferred from bits and pieces of information in Acts and the Epistles. There is no “Magna Carta” for governance laid out by Jesus, Paul, or anyone else for that matter.

There is no indication that these models (if we can even call them that) were to be continued infinitely into the future.  I doubt the New Community was even thinking about that!  This is probably why we don’t find consistent restrictions on women in the epistles.

Paul was aware that there was chaos in public worship in Corinth and heretical teaching in Ephesus (women being culprits in both situations, apparently) and took steps to correct those problems. On the other hand, the churches in Rome and Philippi seemed to get it right. I think it’s fair to say that Paul did not intend to establish a gender-discriminatory policy for all churches for all time.

Another indication that leadership was somewhat fluid is that terms for leaders are not consistent. At least seven terms represent various leadership functions: apostle, prophet, evangelist, teacher, bishop (overseer), elder, and deacon. Some of these roles overlap in function or are used interchangeably. There was no role of senior pastor. For the most part, the evangelical church has not had a problem with changes like moving “church” out of the home or adopting a senior pastor/paid staff model. So why do we insist on holding so tightly to male-only leadership structures today?

It’s the right thing to do.

There is a segment of the church that holds on to the line in an old Tanya Tucker country song: “It’s a little too late to do the right thing now”. They seem to have turned a blind eye to the reality that gender hierarchy is unjust and unbiblical, holding on to old arguments and interpretations. In doing so they keep the church-at-large from moving forward on the trajectory that Christ set for us, a trajectory that established the kingdom of heaven here on earth. But it’s never too late to do the right thing.

We are living in a time when gender inequality is considered to be one of the significant moral issues of our time.

As Emily Nielsen Jones of the Imago Dei Fund comments in an interview at Gordon College,

“Can you, with integrity, be working to combat the plight of girls and women around the world in places like India and Cambodia while holding onto religious ideas or practices that don’t empower women within your own organizations, or bar them from serving on your leadership board or assuming leadership roles at all levels? From my take on things, those women on the other side of the world actually want more than just to be rescued from abuse and enslavement. Once their basic human security is established, they want what each of us want: they want dignity, equality, agency, and the freedom to chart their course in life so that they may in some way add value to our world. They do not want to be confined to a role or a “rung” in an org chart”.

In the end, including women elders in church leadership is about faithfulness to the gospel message.

It’s not about effectiveness, although adding women elders to your church board will certainly have an impact on that. It’s about justice and about righting what is wrong in this world.  It’s about faithfulness – being faithful to the ethic and value system of the Kingdom of God. And it’s about choosing to live under grace, and not under the consequences of sin.

A note from the author about the cartoon: For some time now, I’ve been impressed with the work of David Hayward, who calls himself “a graffiti artist on the walls of religion”. His work always causes me to stop and think. See more at http://nakedpastor.tumblr.com/.