A Complementarian View of Justice? 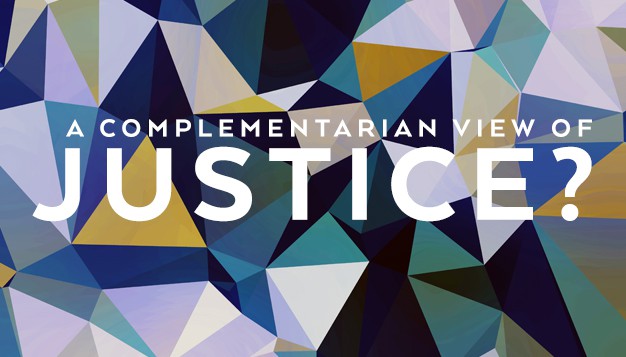 Last week, I attended The Justice Conference that was held here in Los Angeles. I have to say up front that it was incredible. I truly appreciated The Justice Conference for presenting a great line up of speakers who, unlike those at many Christian conferences, didn’t all look exactly the same.  The gender, race, and age ratios were pleasantly surprising, and the presentations covered multiple facets of justice work. Getting to hear from so many different speakers was a highlight brought up by almost every person I talked to that weekend.

And in the midst of those amazing speakers, and the great musical performances, and the opportunities to meet remarkable people, one thing didn’t fit. It made me wonder if I was the only one who was torn – the only one struggling with language, nuance, unspoken prejudice.

Because one thing came to my mind more than a few times throughout the conference. I sat there and couldn’t help but see the irony in listening to (a few) complementarian men talk about justice – men who do not see men and women as ontologically AND functionally equal, yet who talked about righting the wrongs of the world. How strange it was to sit and listen to people who didn’t see the underlying injustice in their own teaching about justice.

It made me squirm.

And I even struggled with the fact that I had a hard time listening to them, because I ended up having a conversation in my head that went something like this:

Kate: Ugh I can hardly hear his message over the loud noise of his patriarchy.
Kate: So you’re unable to listen to people who you disagree with?
And back and forth it went…

But my struggle to listen to complementarians speak about justice doesn’t really have to do with the fact that I disagree with them. It’s something different from that.

It’s that I wonder if they can really believe the worldview they ascribe to.

It’s that I wonder if they have really thought it all through.

It’s that I wonder if they really think that the God of justice would create one group of people to be subservient to another.

It’s that I wonder if they notice that most of their examples, and all of their pronouns, are about men, for men, to men.

So I stopped listening. Because I’m done hearing talks about “justice” that continue to favor men above women. I’m done accepting that if I am in a Christian environment, women will be missing from the talk, or the sermon, or the illustration, or the story. I’m done hearing one more man talk about the harmful effects of sin in this world without realizing that his patriarchal mindset is one of them.

I struggle to listen because in order to overlook this male-centeredness, I have to suppress the very thing within me that cares about justice in the first place. So I tune out, and write what will turn into future blog posts instead. Not because I think that these men have nothing to teach me, but because I wish they would listen to their own messages; I wish they would apply the principles of justice they talk about to their own views of men and women, instead of thinking they have no relevance there.

It’s really hard to take a complementarian pastor seriously when he warns against worldviews that might cause us to do justice work unjustly; when his church strives to free women from sex slavery, but not from the patriarchal system that created the industry in the first place.

And I struggle, because their churches do a lot of good. I know they do. But imagine what their churches could do if all of their members were seen as full and equal participants of Kingdom work. Imagine how much more powerful their words would be if they came from lips that spoke the full message of freedom for women, and not only freedom from physical bondage.

Because when they talk about freeing women, I want to ask freeing them for what? For a different kind of subordination? To be relegated to second class status in the Church? To be seen, not as full and equal, but as lacking and needing the leadership of another? Do we really think that is the best that Jesus has to offer women? Or do we think the cross means more than that?

We need to remember that male-rule doesn’t show up in scripture until after the entrance of sin.

We need to remember that patriarchy slithered into this world on the back of a serpent.

And if sin created male dominance in Genesis 3:16, then a Christian conversation about God’s justice should never take place without acknowledging that Jesus’ death and resurrection frees women from all the results of sin, including all notions of male superiority.

We cannot miss this fundamental message of the equality of men and women in scripture. It must be at the heart of our vision of justice, because without it we miss the power of the cross. Without it we say that Jesus can fully restore men to relationship with God, but that women still need a covering to do so.

Christians who do not see men and women as ontologically and functionally equal, need to re-evaluate their theology because, as Dr. Mimi Haddad would say, “ideas have consequences”. If we truly believe that God created a whole people group (women) to be under the authority of another people group (men), then that affects the way we think the world should be ordered, and it will affect the way we do our justice work. If we believe that God gives special privilege to men; if we value the male voice over the female voice; if we segregate teaching, leadership, and service opportunities based upon gender – then we function under a mindset that God favors men over women, and our idea of justice is, in and of itself, unjust.

If Christians continue to hold to this unjust theological view, then the subordination of women will always exist, and we will never be able to right the wrongs in a world where the majority of human rights violations are committed against women.

And that just isn’t good enough for me.

Update: I think it’s important to point out that Dr. Mimi Haddad presented on egalitarian theology and gender justice at the Justice Conference’s pre-conference session. I was thankful for this viewpoint going into the main conference. It was a fantastic presentation!