A few months after we said “I do,” my wife Amy and I attended a class for newly married couples at our local church. Each week, we were taught a different topic by a different teacher intended to help us grow in our marriage. One week the topic was “Women’s Roles.” I remember sitting in that room like it was yesterday. The teacher walked into the room, strode up to the whiteboard, and wrote the following list:

Then she said, “Ladies, these three S’s are the best way to remember your role in marriage.”

I could feel Amy stiffen in anger next to me. I began laughing involuntarily. I assumed the statement was a misguided joke meant to alleviate the tension in the room. But after I got a “stop laughing, moron” look from the teacher, I realized something horribly tragic: this wasn’t a joke at all.

Next came, “Turn with me in your Bibles to Colossians 3:18.”  I was stunned. Not only was this damaging message about to be taught to these impressionable new brides, the claim was being made that it was actually based on scripture.

“Wives, submit yourselves to your husbands, as is fitting in the Lord.” Colossians 3:18

For the next hour, we sat through dangerous and misogynistic teaching that only existed because someone had decided to rip this verse out of its context and apply it to fit her purposes for marriage.  How can we prevent this kind of Biblical perversion? By more thoroughly studying the scriptures we claim to love so deeply.

Consider the context in which Paul wrote this letter. The Colossians were living in a totalitarian patriarchy, a sociological model that placed the male in complete and total control. For the most part, men were the only ones who could own property including slaves, concubines, children, and even wives. Women were possessions to be owned, not members of the family. The first-century male’s possessions existed solely to benefit him: slaves and children by working for the estate, concubines by meeting the man’s sexual desires, and the wife mostly by bearing male heirs.

This didn’t sit right with Paul. He realized that this totalitarian patriarchy was incongruent with the teachings and actions of Jesus. Consider these examples from the life of Christ:

So how does Paul fight against this totalitarian patriarchy? By centering each person’s identity around who they are in Christ. In fact, he does this just seven verses prior to the teacher’s proof text in his letter to the Colossians:

There is no Gentile or Jew, circumcised or uncircumcised, barbarian, Scythian, slave or free, but Christ is all, and is in all. Colossians 3:11

He says the same thing in his letter to the Galatians:

In one sentence, Paul dismantles society’s hierarchies based around race, ethnicity, socio-economic status, and gender.

If we use the widely accepted definition of feminism— a movement to achieve political, economic, cultural, personal, and social rights for women that are equal to those of men*—then Jesus and Paul were two of the very first feminists to walk this earth.

With that contextual background, let’s take another look at our often misused text from Colossians 3:

Wives, submit yourselves to your husbands, as is fitting in the Lord. Husbands, love your wives and do not be harsh with them. Colossians 3:18-19

A deeper study of this passage reveals that the word translated as “love” in verse 19 is the word “agape.” There were many different words for “love” in Greek, the language used to write the New Testament. Some of them are for friendship, others for sexual passion, still others for love of self, but there is one “love” that stands above all the rest: agape.

Agape is a sacrificial love; one that puts others first. Agape love is the kind willing to lay down its life for the ones it loves. It’s the same word used in the Bible’s most popular verse: For God so loved the world that he gave his one and only Son, that whoever believes in him shall not perish but have eternal life. John 3:16

Paul uses Colossians 3:18 and 19 as parallel commands: “lay everything down for each other, including your life.” Mutual submission and sacrifice is what the Bible teaches, not unilateral submission or the debased sexism that is taught in many churches today.

Secular culture, both then and now, tells us to always fight for power in our relationships, but God’s Word says the opposite. As society screams at us to keep the upper hand at all costs, Jesus is quietly whispering, “There is no greater love than to lay down your life.” (John 15:13)

This is backwards, this is opposite, this is counter-cultural. This is the Kingdom of God—an incredible place where we live, love, and serve as equals, no matter our gender.

Patreon
Posted in "Notorious" Passages, Women and Relationships
Tagged as marriage // marriage and family // submission in the bible // Zach Lambert 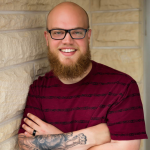 Zach is the founder and Lead Pastor of Restore Austin, a church in urban Austin, Texas. He is a native Austinite who moved back to the city to start Restore after receiving his Master of Theology from Dallas Theological Seminary. He and his wife Amy love watching live music, discovering local Mexican food places, and parenting their biological and foster kids.