This is the forth post in a series on feminism. Check out parts one, two, & three.

Just over a year ago, I interviewed thirteen Christian women about their understandings of faith, gender, and feminism for my senior thesis sociology research.

Although the research was a requirement for my undergraduate degree, it was a perfect opportunity for me to explore my own tensions surrounding faith, gender identity, and social norms through the experiences of others.

To be completely honest, I began this research wanting to further reaffirm my own beliefs about women’s full inclusion in church life and leadership. My formative years at Scripps College had forged a strong feminist identity in me, and my coursework in sociology gave me a foundational knowledge of gender construction and practice.

Although I was (and continue to be) committed to conducting my interviews in ways that limit the influence of my personal bias as much as possible, I was afraid to possibly hear women agree with traditional narratives about gender and women’s roles. What would I do if they voluntarily embraced a worldview I thought was limited and damaging? How would I interpret their stories?

However, as I began to conduct my interviews, I slowly began to release this fear of being on the wrong side of the “gender fence” as I opened myself up to the women I spoke with. The stories that they offered me were varied; stories of hurt and discrimination stood alongside narratives of empowered leadership and choices of willing submission.

Each woman was a complex mosaic of experience, theology, and context that I could not reduce to a simplistic sociological theory or theological tradition.

The more data I gathered, the more I began to realize that a “right-wrong” dichotomy is not always a helpful way to approach our understanding of gender. Instead, I’ve come to understand gender as a tool that we use to organize our experience, influence our behavior, and create meaning.

Since this was a formative experience for me personally, academically, and spiritually, I’m thankful for the opportunity to share my findings and reflections with you here. Below you’ll find a few points that have continued to impact me long after my formal interviews ended.

Here are four things I have found to be true about Jesus Feminism:

1. Self-definition is a Powerful Tool

When you consider that church, mainstream culture, and the feminist movement often have very different approaches to understanding gender, it’s not surprising that figuring out our own views on the topic can be confusing.

One of the main findings from my research was that the Christian women I interviewed actively created their own definitions of feminism and what it means to be a Christian woman. This act of self-definition was so powerful because it allowed these women to find cohesiveness across various identities and beliefs. This became especially apparent when I asked my participants if they identified as feminist and to define feminism.

Most of the women I interviewed did identify as feminist, but there were often a laundry list of conditions attached to that identity. For example: “…but I don’t hate men”, “…but I don’t think men and women are exactly the same”, or “Well, I consider myself a Jesus Feminist”. Since Christian theology (loosely categorized) and feminism have been often presented as opposites in the cultural landscape, this act of self-definition allows both identities to be embraced.

2. Gender Inequality Cannot be Separated From Other Forms of Oppression

One of the largest flaws in my research was that the women I interviewed were almost exclusively white, highly educated, and generally came from middle-upper class backgrounds. Although it was more comfortable for me to interview these women because I shared a lot in common with them, it allowed me to to prioritize gender over other issues of inequality.

In sharing their backgrounds, I only once heard a participant share an experience of discrimination that wasn’t exclusively gender-based. There are so many women (past and present) who have offered their experiences, theologies, prayers, and critiques to the world, and it would be a shame if we miss opportunities to learn from them because we only choose to listen to others who are similar to us.

Another key finding from this research is that there are almost always inconsistencies between our intellectual understanding of gender, our theology of gender, and the way we live our lives. During my interviews I noticed that participants would quickly reject ideas about gender that they found offensive or biblically unsupported, but they simultaneously embraced gendered ideas they found comfortable, positive, or even romantic.

For example, most of the women I interviewed were strongly supportive of women holding church leadership roles, but several of those women also had highly gendered expectations for romantic relationships. Since gender is such a fundamental way that we organize our personal and social lives, it’s not surprising that our “gender rules” are flexible in these different contexts.

These contradictions exist because our survival largely depends on our ability to “play along” to the norms and rules that govern our culture. As someone who also experiences these gender contradictions in my day-to-day life, I feel obligated to enter into areas of tension, but I also recognize the need to give myself grace as I explore both the boundaries and possibilities that I find. (However, check out this article from Tim Peck for some practical ways to avoid undermining your theology of gender!)

4. It Often Takes Something Big to Change our Views

As you have probably guessed, I really love talking to women about gender, faith, and feminism. For almost all of the women I’ve talked with who strongly believe in egalitarianism and a feminist hermeneutic, there was some tipping point in their lives that made them reconsider their understandings.

Even though theology can (and should, I think) play a large role in shaping our views, our lived practice of those beliefs is often the compass that we use to lead us into the future. The women that I interviewed who held more traditional views of gender generally had positive experiences of complementarian relationships and gender-dictated roles.

This is also true for me; I didn’t even begin to reconsider my views about gender roles until I realized that the model wasn’t working in my relationship anymore, and was ultimately causing more tension and confusion for us. Although I don’t always agree with others about their views on these topics, I deeply respect that their beliefs, like mine, are deeply rooted and are not going to be easily overturned.

These findings are just a small window into my experiences with this research, and I hope for more opportunities to learn about the nuanced ways that faith, feminism, and gender shape and influence our world. Wherever you’re at in this journey, thank you for letting me be a part of it—and let’s keep pushing forward together!

If you’re interested in downloading a PDF of my senior thesis, you can find it here: http://scholarship.claremont.edu/scripps_theses/459/

P.S. There are a lot of things I didn’t have space to include or could have talked about for much longer, so if you have a question leave it in the comments or feel free to send me an email me at [email protected]! 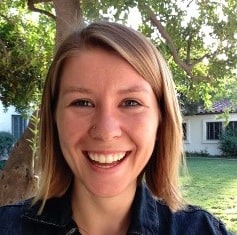 is a daughter, friend, and culture lover who spends her days as a research analyst for Barna Group in Ventura, CA. When she isn’t daydreaming about graduate programs around the world she wants to apply for, you can find her discussing practical theology with close friends, haunting the local antique store, or nurturing her two stubborn jade plants. A recent graduate of Scripps College, she wrote her senior thesis about how Christian women think about gender and faith (http://scholarship.claremont.edu/scripps_theses/459/).