A God With Two Hands: Reflecting on Gender Equality

In a recent Christians for Biblical Equality blog post, Kevin Giles showed how people used the Bible to justify slavery in a way that is similar to the justification of gender-based hierarchy. In the 19th century United States, pro-slavery theologians made a comprehensive biblical case for the rightness of slavery.

Based on a flat reading of Scripture, in which every part of the Bible should be weighted equally, they probably had the better argument. After all, the Old Testament provided rules for the treatment of slaves, Jesus never said anything about abolishing slavery, and Paul went so far as to tell slaves to obey their masters.

Jesus and the Interpretation of Scripture

If we view that approach as unacceptable, we might ask if there is a better way to interpret the Bible. One popular option is to read the Bible through the lens of Jesus. After all, Paul calls Jesus “the image of the invisible God” (Colossians 1:15). What better way to know what God is really like than to read the Bible in light of the life and teachings of Jesus? Christians ranging from 16th century Anabaptists to Dietrich Bonhoeffer have used this perspective successfully.

But that isn’t quite good enough. For one thing, the Old Testament contains only clues as to who Jesus is, not direct descriptions of the historical person Jesus of Nazareth. For another thing, there are different characteristics of Jesus in different parts of the New Testament. Is Jesus the meek teacher of the Sermon on the Mount or the warrior lamb of Revelation? If there is a way of balancing our interpretation of the Bible more comprehensively than only focusing on Jesus, we should use it as well.

Irenaeus and the Two Hands of God

Fortunately, such an approach can be found in the writings of the 2nd century bishop Irenaeus of Lyons. In his book Against Heresies, Irenaeus writes that God uses Son and Spirit, or Word and Wisdom, as two hands. According to Irenaeus, the Bible records that God’s works in the world are done using these hands. Together, they created the universe and they have gathered the divided people of the world and reconciled them to God.

When we read the Bible, we see both of these hands at work throughout the story. This helps us to interpret the Bible on questions such as slavery that seem difficult on a flat reading.

So the Spirit is the one who delivered the children of Israel from slavery in Egypt. The prophets promised that the same Spirit would gather the exiles of God’s people and return them to their land.

And Jesus began his ministry with a proclamation of freedom for captives since the Spirit of the Lord was upon him (Luke 4:18). Later, Paul said that Christ has set us free for freedom, which is a reason not to allow anyone to enslave a Christian again (Galatians 5:1). Despite the arguments used by pro-slavery theologians, the work of the Son and Spirit in the Bible repeatedly involves freeing people from slavery.

Women and the Spirit

In Genesis 1, we see the work of the Son and Spirit in creating male and female as good, and this pattern of divine blessing on both men and women continues. It was the Spirit who sent prophets to the people of Israel. Miriam was sent to lead God’s people after their redemption out of Egypt (Micah 6:4). Huldah was sent to prophesy and lead the people of Judah to repentance and renewal of the covenant (2 Chronicles 34:22-28). And the prophetess Deborah was empowered to deliver the tribes of Israel from their oppressors (Judges 4&5).

The prophet Joel predicted that both sons and daughters would prophesy when the Lord’s Spirit was poured out. When this was fulfilled at the Feast of Pentecost, both male and female disciples were there together prophesying (Acts 1:14, 2:1).

This wasn’t the first time that Mary the mother of Jesus was filled with the Spirit, though. Long before John the Baptist predicted that Jesus would baptize people in the Holy Spirit and fire, that same Spirit baptized Mary and favored her to be the mother of the creating and redeeming Son (Luke 1:35). That same Spirit filled her cousin Elizabeth when she heard Mary’s voice (Luke 1:39-45).

Throughout the New Testament, the Spirit is constantly present and active, and there is no sign that the Spirit holds to a complementarian view of the role of women. Instead, we consistently see that the Spirit was given to all and to each for the building up of the church (e.g., 1 Corinthians 12:7).

Women and the Son

If there is anything peculiar about Jesus and women, it is how much contact he has with women as compared with men. This was true to the point that Jesus did not even have an earthly father. Before his birth, it was the women, Mary and Elizabeth, who played heroic roles in the story, favored to be directly involved in the arrival of the Son.

During his ministry, Jesus continued to have an uncommonly high regard for women. He commended the faith of a Canaanite woman and healed her demon-possessed daughter, while pointing out just how unconventional this was (Matthew 15:21-28). He sent a Samaritan woman of uncertain moral character to proclaim his Gospel to her village (John 4:1-42). And he told Mary of Bethany that she should pursue education as his disciple rather than working in the kitchen (Luke 10:38-42). This would still be a scandal in many cultures that expect women to care for domestic tasks and not to concern themselves with impractical ideas.

And we might hear, as I recently did, that the disciples all abandoned Jesus as he died on the cross. But it was women (along with one male disciple) who stood beneath the cross and wept (Matthew 26:55&6). And it was women who were courageous enough to visit his tomb and anoint his body with spices, just as a woman had during his lifetime (Mark 16:1-2). For this, they were given the privilege of being the first to proclaim his resurrection to cowering and unbelieving men (Mark 16:9).

When we read the Bible through the lens of the works of the Son and the Spirit, we see that God has favored women at key points in the stories of creation, redemption, and renewal. In the actions of Spirit and Son, we see that the God described by the Bible consistently works through what Carolyn Custis James calls a “blessed alliance” of women and men.

That is the recurring story of biblical womanhood and manhood.

Posted in Biblical Equality, Women and the Bible, Women and the Church
Tagged as egalitarianism // Jesus and women // sexism and gender equality in the church // Stephen Waldron 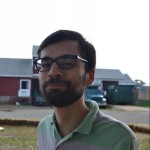 Stephen is a writer who lives in Salem, Massachusetts. He holds an M.A. in systematic theology from Marquette University. He blogs at postcolonialevangelicalism.wordpress.com.