What I Learned about Being an Advocate for Women in Seminary

“The devil is among us here at our seminary: women are being told they can preach.”

Those were the first words of a classmate’s sermon in my preaching class. He went on to berate the class with his interpretation of 1 Timothy 2:8-15 for another 20 minutes.

In some seminaries this type of sermon may not have been surprising, but this seminary officially stated that women are affirmed at all levels of church leadership. So, to say the least, I was stunned. But I shouldn’t have been. When it had been my turn to preach this student had been particularly critical of my sermon and delivery, even going as far as to accuse me of not having prepared or done good exegetical work. While other students had been encouraging in their feedback and constructive in their critiques, he had been unkind and unrestrained with his public criticism.

After he concluded his sermon, there was an uncomfortable silence in the room.

Finally, a male classmate spoke up and said gently but firmly, “I don’t agree with your conclusion. I believe the same Bible you do, but I believe that women can and should be pastors. Where is your love for God’s people, for women, and for God’s word in your sermon? You didn’t bring good news to the people of God.”

Another person may have commented, but I honestly don’t remember anyone else saying anything substantive. I do remember that the other two women in the class were absent that day, so my professor, who has a Ph.D. in homiletics and is a preacher herself, and I were the only women there. All the other male classmates looked uncomfortable and sat in silence.

In our next class session, more students were given the chance to provide feedback, and the student who had preached the sermon was told publicly by our professor that the seminary affirms and blesses all women preachers.

Women, he was admonished, are not sharing or testifying; they are preachers and pastors.

Then he was told that he would be unable to offer verbal critique in the future. After class, I spoke to two other male classmates who told me they disagreed with him and that “he was way out of line” with that sermon.

The next time I preached, I received no verbal critique from this student. However, he scribbled a written critique that was just as mean and attacking as he had been verbally. He was reprimanded again and forbidden from giving any further feedback to anyone. Of course, that didn’t stop him from sending me a couple of harassing emails.

I used to believe that the seminary and my classmates handled this situation as well as they could have: the uncooperative student was silenced (somewhat), publicly scolded for his behavior, and reminded of the seminary’s stance. But I don’t think so anymore.  Here are my reasons:

1. The class was supposed to be a safe space for men and women to learn to preach, but it wasn’t safe for women.

It was a hostile environment. The feedback after my first sermon was so harsh that it really undermined my confidence.  I expected that if I ever went into the world to preach there would be hardships because of my gender, but I never expected to find that in my preaching class at a seminary that affirms women in leadership! That student should have been asked to leave the class after he decided to attack me again. The advocate in this case should have been the seminary on behalf of all women, especially those in the class.

Over the years, I’ve been given advice by other women preachers that encouraged me to do some or all of the following:

The common thread here is that many women don’t find being a preacher is safe or easy, and feel pressured either to accommodate men, or equipment made for men, to be accepted. Depending on the congregation, these are realities for many of our sisters. Shouldn’t women be free of these stresses as they are learning to preach? And shouldn’t all of us advocate for safe spaces for women leaders in our churches? We all need safe spaces where there’s room to fail, grow, and learn. This is especially important for women, given the 2000 years that we were kept out of the pulpit and told to be quiet.

2. There were men in the class who should have advocated for women.

There are no silent allies. If someone is in quiet disagreement while women are being harassed and silenced, that person is not an ally—that person is, in fact, complicit in the oppression of women. When I think back on that class, I’m sometimes perplexed that only one student stood up to advocate against this bully. How is that possible when nearly everyone in the room disagreed with him? At least a couple of my classmates were happy to tell me they disagreed with him, but it’s not me they should have told!

There’s sometimes a misunderstanding in communities of faith about the difference between making peace and avoiding a necessary conflict. This was an important time for my brothers in the faith to speak up and say that my classmate’s words and actions were inappropriate and hurtful to women and to the community of God. This was a time to create conflict for the sake of justice! I sometimes hear male pastors talk about the fact that their churches rarely even consider hiring female pastors, even in denominations that fully affirm women leaders. Yet no one speaks up against that injustice. We need courageous advocates in our churches, too. I’m thankful for the classmate that did speak on our behalf. I don’t need silent allies and neither do my sisters.

3. The women in the class were also advocates and should have spoken out assertively.

I appreciated the way my professor addressed this student following his sermon, but I wish I had spoken up for myself that day. Honestly, I was afraid to do so assertively, so I only said a few feeble words. Women are often afraid of being thought of as defensive, or as angry, man-hating shrews, or as shrill feminists demanding special rights when all we’re asking for are equal opportunities in church leadership. Often those accusations are unfounded and unfair, so I am happy to say that I’m all done with that fear. I’d rather be thought of as shrill and accused of pulling the gender card than be complicit in my own dehumanization and that of my sisters. I’ll risk all of that to be an advocate for women preachers, and I want to encourage all women to advocate for themselves.

Some of my favorite people in the Bible were advocates.

Esther who defended her people from certain genocide; Nathan who stood up to an unjust king, risking his very life; and Moses who stood up to a tyrant and led God’s people out of bondage. These were people who understood that love isn’t sentimental or easy but often requires risk and sacrifice. I’ve heard it said that justice is what love looks like in public, but I think it looks like advocacy, too.

Posted in Personal Stories, Women and the Church
Tagged as Karen Gonzalez 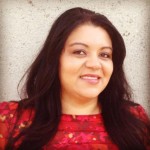 is a teacher, baseball lover, and amateur theologian in Baltimore, MD. She works in church engagement for immigrant advocacy for a non-profit and teaches English as a second language.