The Anointing of Jesus at Bethany

As Samuel before me, I thought, “What better place than in the midst of his brothers?” I glanced around at his friends; Lazarus, Simon Peter, James and the others.

“Two days” echoed through me. Did they not hear him? He told us that in two days, he dies. He foretells his death and his kingdom in the same sermon. How could the two relate? And yet, I have seen him bawl life into my dead brother. Can he raise himself? Two days marks something terrible … and wonderful. Death and a kingdom. A king in death. I could not see him go to his kingdom unprepared. My sweaty hand gripped the cool stone of the vial.

Meeting his eyes, I rose and pushed my way around prostrate bodies reclining at the table. I pulled the alabaster jar from the folds of my robe. His eyebrows quizzed me as I uncorked the bottle, turning its end up and letting all the contents slip out into his hair. The brown liquid dripped down his temples and began to gather in his beard and plop onto his shoulders. A warm, earthy musk invaded my nostrils. My hand cupped his cheek, smearing the nard. His features relaxed for a moment, eyes closed and head upturned toward heaven.

Did I expect loud cries of “Hail the king?” Well, yes. Wasn’t it obvious he deserved a proper anointing?  Instead, silence buzzed my ears. Then, cries of outrage.

“Stop it!” Judas shouted. “Why waste this perfume? It could have been sold for more than a year’s wages and the money used in a more noble fashion!”

“Mary, what are you thinking?” Peter frowned and tried to grab the vial from my hand. My silent action, condemned. My motives, questioned. Shame spewed out over all the wrong things, threatening to invade me. Had I heard wrong? I pulled my hand away.

“Leave her alone!” Jesus scolded. “Why are you giving her a hard time about this?” He reached for my hand once more and squeezed.

To me he said, “This is beautiful.”

To the others, “She has listened to me and knows I am soon to die. This perfume is for my burial. You have a lifetime to do good for others, but your time with me is limited.”

Two days. I glanced around hoping the others would query him further. But they all bore the dull look of stubborn incomprehension. Neither hearing, nor understanding.

Jesus pressed my hand again in reassurance, and his words brought great comfort to me. “Believe me. What you have done will be remembered and admired wherever the Good News is preached. All over the world!” He smiled.

Two days is not the end, then. But a beginning.  By my own hand, he is Messiah: God’s Anointed.

Jesus’ anointing (Mark 14:3-9) marked him as Messiah, prepared him for his coming crown, and memorialized the faith-filled ritual of a woman.

Though it is often dismissed as little more than preparation for death, there is more to it than a mundane burial ritual. The anointing act conjures up sacred Old Testament connotations to ancient heritage, priestly rituals, the consecration of kings, and the prophetic figure of Messiah, which literally means “One Smeared with Oil”.

A popular designation for the promised future king of Israel was “Anointed One.” This title evolves from God’s method of marking people set aside for a specific purpose and granting them authority. The high priest of the temple was anointed before service. Samuel, the priest and prophet, anointed King Saul and King David. Not only were these men handpicked by God for a special task, they were empowered by the presence of His Spirit and protected by their status as God’s anointed. The prophet Isaiah, looking forward to the future promised king and savior of Israel, names the one who would remove all burdens from his people as the “Anointed One.” Jesus identifies himself as this Messiah in Luke 4:18.

The only time Jesus is literally “Smeared with Oil” is by a woman serving as God’s anointing hand.

These accounts, told in all four of the gospels, can be interpreted as a singular event with varied editing, or two women at two different times. Either way, the woman (or women) is used to reveal the identity of the Messiah, much like Peter’s proclamation “You are the Christ!” but with one significant exception.

Immediately after his declaration, Peter denied the necessity of Jesus’ death, thereby revealing a lack of understanding and immature faith – a lapse Jesus called satanic.

Not only does she believe Jesus is the Christ, but she accepts his death is an integral part of his Messianic destiny. Jesus can only gain His throne by his pending death.

Hence her anointing is declared by Jesus as preparing Him for the grave. She does not use her voice to declare prophecy, but her symbolic act speaks for her, much like the sign acts* of mute Ezekiel spoke volumes without a word. The woman’s anointing declares her faith that Jesus is Messiah and foretells that he will die to become King of his people.

It is significant that a woman serves as the anointing agent.

Anointing proclaimed kings, ordained priests, and heralded the Spirit’s work in the Old Testament. It transferred authority from God himself. The one who anointed and the ritual itself were recorded and lauded as defining moments. God chose this humble woman as His hand to anoint His Son as King.

It is easy to let her gender confuse the true importance of this occasion.

Her gender clouded the disciples to the true meaning of her act. They belittled her and esteemed her service in monetary terms only, disregarding her spiritual edge. But the symbolism was not lost on Jesus. He understood and said her act “will also be told in memory of her.” She poured the oil to memorialize him, but he says to remember her.

Have we remembered her?

She is a prophet of God who proclaims by “sign act”* the future king of Israel.

She foretells his impending death by preparing his body for burial.

And she establishes her gender as useable by God in momentous times.

She is Mary of Bethany, the woman who anointed Jesus.

What does the woman at Bethany (assumed by most biblical scholars to be Mary) teach us about genuine discipleship? What might be something you could do for Jesus in response to his sacrifice for you?

*Sign acts were pantomimes that carried a prophetic message or warning to those watching. 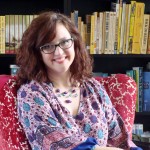 considers herself a “Jill of all trades,” but a master of none. She has two opinions about everything, but is learning that many things don’t have an answer. "My greatest strength is honesty and my weakness is my mouth". Currently, Kay is working toward an MDiv in Christian Theology, and docents for a local museum. She lives in Snoqualmie, WA with her husband and three kids and blogs at kbonikowsky.com.