My Journey as a Female Preacher

A few weeks ago, the pastoral leadership team of my church (which I am a part of) was planning the upcoming sermon series. When asked if I wanted to preach one of the sermons, I enthusiastically said yes.

My “yes” to preaching comes out of a deep sense of call to use my voice. I believe that preaching is one of the ways that God has empowered me to serve and minister to others.

I didn’t always feel this way about preaching. My journey as a female preacher has been a twisting path, filled with fear and insecurity.

While I was a student in college, I was part of a campus ministry that had both men and women leading and preaching. The female preachers I witnessed were confident and strong speakers who spoke with authority and power. Something began stirring in me – it was a whisper of a question,

“Could I ever do what those women are doing? Could I preach a sermon that guides people into a deeper place of knowing God?”

Meanwhile, I was dating a guy who had very strong beliefs against women preaching. He believed (and went to a church that believed) that primary leadership roles were only meant for men, and support roles were for women. Despite my own beliefs that God equally valued both men and women, I attended my boyfriend’s church for six months.

Oh, the foolishness that happens in romance. He and I had long discussions and debates about what Scripture said about the roles of men and women. We ultimately agreed to disagree, and eventually our dating relationship ended. But my confidence as a woman was shaken. In the aftermath of that relationship, I began to question myself. “Was I truly just as qualified as a man to lead and preach?”

As if God knew that I needed some encouragement in that season, I was surrounded by mentors who invited and empowered me to grow in leadership. When I graduated from college, I was invited to be a staff intern with the campus ministry at my school. Part of my role was to preach a few times a year at weekly large group meetings and various annual conferences. At that point, I wasn’t giving an enthusiastic “yes” to preaching; it was more like a reluctant, “I’ll try.” It turns out that God loves to work through people who say “I’ll try.”

In the weeks leading up to my first sermon, I was filled with anxiety and fear. I felt so unequipped. I fantasized about calling my staff supervisor, and making up an elaborate lie about why I couldn’t preach that night. The only thing that kept me from running away was a sense of call from God.

My first few sermons were okay. Not great, not terrible. But my inner world was filled with deep insecurity as a preacher. Before and after each sermon, I felt a great temptation to believe the voices telling me that I couldn’t do it, that other people were far more equipped than me. I frequently prayed, asking God for supernatural courage.

I remember tearfully sharing with one of my staff partners Jenny about all of my fear with preaching. Jenny looked me straight in the eye, and asked, “Larissa, are you preaching because you love God and love people?” I told her, “Yes.” Jenny responded, “Then you need to keep doing it.” And so I kept saying yes.

Another person who became a great advocate for me is my husband, Steve. He is a skilled leader and preacher, and I spent the early days of our relationship feeling a bit overshadowed. But Steve saw my calling and giftedness as a leader more than I did. Through all of my highs and lows as a preacher, he kept advocating for me. He encouraged me to say yes to preaching. We had opportunities to preach together, including a weekend conference for about 150 college students. Partnering with Steve, with the unique ways we are each gifted, has been a surprising place of healing and joy for me.

The more sermons I preached, the more I began to find my voice and my confidence. I got feedback from more experienced preachers. I continued to grow and learn, and I began feeling more comfortable as a female preacher. I started believing that I was not just called to preach, I was equipped by God to do it. I started believing that God had shaped me uniquely to preach with my own voice, and I didn’t have to do it like anyone else.

Here I am now, preparing to preach a sermon at my church. I am hoping and praying that what I preach will join with the movement of God’s Spirit, and guide people into a deeper place of knowing God.

I am a female preacher, saying an enthusiastic “yes” to God. 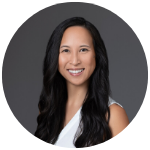 is a spiritual director, ministry planter, and Director of Spiritual Formation at Bluewater Mission Church in Honolulu, Hawaii. She is the creator of Spiritual Journey, where she helps people go deeper in their spiritual journey and encounter God.