Stumbling Over Women: Stones of Remembrance

While touring Germany some years ago, I came across the Stolpersteine Project. Stolpersteine (stumbling stones) are small brass-plated blocks or stones embedded into the streets to remember victims of Nazi oppression. Each stone is made and laid by hand. They are placed at the location where each person was forcibly taken either to prison or to an extermination camp.

Each stone begins with HERE LIVED…… One stone. One name. One person. 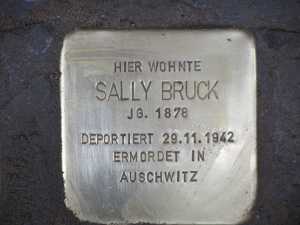 The idea came to German artist Gunter Demnig as he was painting a white line through the city of Cologne to commemorate the 50th anniversary of the deportation of 1000 gypsies to extermination camps in the 1940s. The line would show where they had been chased to the train station. One day an elderly German woman stopped to scold him, insisting that there had never been any gypsies living in Cologne. Shocked, he investigated and found evidence that thousands of gypsies and Jews, had lived side by side with Germans in the 1930s. To combat the human tendency to forget, he designed the first stumbling stones. To date, over 48,000 stones have been laid in more than 20 countries.

The word “stolpern” means “to stumble”.

Demnig says the idea is not that people would physically stumble over the stones, but that they would stumble with their hearts and with their heads. That they would be compelled to stop and think more deeply about the person represented by each stone.  The artist cites a saying from the Talmud that “a person is only forgotten when his or her name is forgotten”.

I love this concept of creating stones of remembrance. Our natural tendency is to forget, to move on. But often it is in looking back that we gain the perspective and courage to move ahead. This is why the Israelites set up stones of remembrance after crossing the Jordan River. In Joshua 4 we read “in the future your children will ask, ‘what do these stones mean?’  Then you can tell them.”

In a sense, The Junia Project is very much like the Stolpersteine Project.

For example, in our series on women in church history, you’ll find the story of Argula von Stauff, one of the most prolific writers of the Protestant Reformation.  One of her pamphlets defending Reformation theology was so popular it was republished 16 times. Yet there is no mention of her in most books about the Reformation.

In another post, we correct the widely held myth that Mary Magdalene was a prostitute. This is never suggested in the Bible, even though she is mentioned 12 times. We want the church to remember that Mary Magdalene traveled with Jesus as part of his band of disciples, that she supported the mission out of her own means, and that Jesus gave her the privilege of being the first person to share the Gospel message.

And then there is Junia.  In Romans 16 Paul sends greetings to his coworkers, commending seven women and five men as crucial to the work of the church.  Verse 7 says “Greet Andronicus and Junia, my fellow Jews who have been in prison with me. They are outstanding among the apostles, and they were in Christ before I was.” Though widely accepted as a woman apostle in early Church history, in later translations an “s” was added to her name, making it into the masculine form, Junias. Today scholars overwhelmingly acknowledge that the name is feminine, and the NIV translation corrected the name in the 2011 revision. (Read our series on Junia here.)

One of these days I’ll write about Emilie Schindler and Katie Luther, to make sure that their names are not forgotten either.

On my trip, I learned that Emilie Schindler had as much to do with the protection of Jews during the war as did her husband Oscar, although he is given the lion’s share of the credit in the history books and in the movie Schindler’s List.

Katie Luther managed the finances, ran a boarding home for 30 people, and supervised the family brewery (yes, you read that correctly!). It was due to her efforts that Martin Luther was free to spend his days writing, traveling, and speaking. Oh, and did I mention that they had six kids?

This ex-nun was one of the few women welcome at the discussion table of the Reformers, valued for her wisdom and wit. At the end of her life Katie is quoted as saying that she was “clinging to Christ like a burr on a dress”.

Another thing you should know about stumbling stones is that the more people walk on them, the brighter they become.

This is why we will continue telling the stories of women, especially those in danger of being footnoted and forgotten. We will keep reminding the Church that the full image of God is not reflected in the world until the gifts of both men and women are unleashed without restrictions based on gender.

Throughout history, the Church has flourished when this happens. Women were present in the upper room at Pentecost and played key roles in early church leadership. Women influenced Reformation theology even as they ministered to fugitives, refugees, and victims of the plague.

In the late 18th and 19th centuries, women evangelists moved throughout England and the U.S., preaching to large crowds with great effectiveness. And women were influential in the foreign missions movement in the early 1900s.

We are at another crossroads in history. God is raising up daughters of Abraham in record numbers so that the mission of God in the world can be accomplished.

Some years ago when the pastor of one of the largest churches in the world was asked if he had any advice for church leaders his response was just three words…”release your women!”   If we really want to impact the world for Christ, women must know their stories count and be released to participate fully in the mission of God.

Our goal as Christians is to be living stumbling stones.

Those who “stumble” over us should be compelled to think more deeply about Jesus as we share our stories and our lives with them.

As you come to the living stone, Jesus, rejected by humankind but chosen by God, you also, like living stones, are being built into a spiritual house to be a holy priesthood, acceptable to God through Christ”.  1 Peter 2:4-5

We are forever indebted to launch team members Ariel Bartlett (author and editor) and Kate Hickman (author and graphic designer) for their contributions! We are also thankful for launch authors Khristi Adams, Harriet Congdon, Bob Edwards, Jody Fernando, Marianne Mandujano, Tim Peck, Heather Penny, and Laura Ziesel! So appreciate the blessing of your friendship and support.