Overcoming Gender Discrimination in the Church: One Woman’s Story

Did God not love me, just because I was female?

I couldn’t study. I couldn’t think straight. I was distressed, overset with a spiritual crisis that rocked me to the core. I had been, by nature, a well-behaved and compliant child who didn’t really experience the rebellion thing as a teenager (heck, my “rebellion” was trying to find opportunities to go to church twice on a Sunday, which my unchurched family didn’t always appreciate!). “Following the rules” was, as far as I could see it, a big part of “doing the right thing,” and “being a decent person.” And obeying rules was something I didn’t usually find at all difficult. And conflict? Nope…definitely not something I would willingly enter into.

But another aspect of my nature was also attracted to notions of compassion and justice.

Doing a kindness to a friend involving significant personal sacrifice, befriending a lonely student at school – doing these things for Jesus came naturally. As a teen, I chose to write the project for my Queen’s Award (the highest international award of the Girls’ Brigade – an interdenominational Christian youth organization) on the work of World Vision in helping people in the developing world out of poverty, and how their Christian beliefs underpinned these actions.

I was 14 when the message of the Gospel grasped me and changed my life.

I loved God deeply and passionately. I trusted in His goodness and mercy unswervingly. But within a few years, little cracks began to appear in that trust.  The gender issue hadn’t really occurred to me much before…nice, compliant girls don’t get their knickers in a knot about things like that, right? I can recall a “wives submit” sermon when I was about 15, but the Bible said it, so it must have been right…and being too young to contemplate the reality of marriage in any personal way, it didn’t particularly bother me.

As I grew older, I loved serving God in any capacity possible with the various gifts He had given me. But it gradually became evident that there were barriers to my service in some areas which were not just about my youth and inexperience. The ladies in my church could come up the front and give the announcements, or lead us in prayer or singing, or give a children’s story. But when it came to presiding over communion or giving sermons, it was a no-go zone for women. And only men could put their names forward for election as elders.

I’d spent my childhood in a denomination where women could do these things, so the realization that different churches who read the same Bible had different beliefs on this issue began to make me pause and think.

In my personal Bible reading, I was starting to encounter texts that troubled me and which felt inconsistent with the Jesus who told me, “When the Son sets you free, you will be free indeed.”

What – because I’m female, I’m supposed to keep “silent” in church? How come “silence” doesn’t extend to getting up front to ask for helpers for the church fete next month? Eve took the fruit…so now women can’t teach men or hold authority (except where kids are involved). And somehow this has something to do with “being saved through childbearing”?

How do these things even go together?

Most of the boys at church seemed indifferent to serving God, and yet my heart burned to serve him however I could, wherever I could, whenever I could. Was I less to God than those half-hearted boys? I had the niggling sense that God was calling me to…something…but what exactly? What was I, a woman, actually allowed to do? The discrepancies I observed, the contrast between my passion for serving God and the limitations placed on me, and the strangeness of a few confusing Bible passages became an interwoven narrative that seemed to jar me every time I turned around.

I looked more and more at these texts. They seemed clear and unavoidable.

“Women should be silent in the churches,” “I do not permit a woman to teach or have authority…” But these verses also seemed so patently unfair. Isn’t God a God of justice and goodness and compassion? What’s good about giving me a gift and denying me the opportunity to use it fully for God’s glory? If God doesn’t like or value me the same as He values the boys, just because I have two X chromosomes…is God truly good? If God is not good…can I still follow Him? The faith I’d given myself so completely to seemed to be ebbing away. It hurt.

The questions gave me a headache and a heartache. By my third year at university, I felt my faith was collapsing around my ears.

I couldn’t focus on my studies. I found myself hauled in to see the head of the History department about my late assignments. Recent relationship breakdown…major spiritual crisis…struggling to focus, so sorry, Professor. I think the concept of “spiritual crisis” as an excuse intrigued her. She hadn’t any idea how to proceed with that one, so she gave me a further extension and I made some effort to knuckle down so I didn’t flunk. But I knew I had to solve this problem once and for all before my life fell apart.

I had virtually no hope that there was a real solution to my dilemma, but I wasn’t going down without a fight! It was clear that I wasn’t going to find adults to come alongside and help me wrestle with these questions in my church. That left me one option – research. So off I went to the local Christian bookstore. After spending a long time dwelling over the selection on offer, I eventually went away with a book titled I Suffer Not a Woman: Rethinking I Timothy 2:11-15 in Light of  Ancient Evidence, by Catherine Clark Kroeger and Richard Kroeger.  Once I opened those pages, I couldn’t stop. It was like the scales fell off my eyes.

Here was an approach that didn’t say “throw away the Bible’s authority,” but showed that women were valued by God, and that Paul’s words are greatly misunderstood.

The Kroegers’ approach treated the reader as an intelligent being and honored God’s word at the same time. Other books would follow, but this one has a special place in my heart for giving me the moment where I could sing, “My chains fell off, my heart was free, I rose, went forth and followed Thee” without having to add a mental disclaimer about the limited ways in which I might be permitted to follow. I soon found Christians for Biblical Equality on the internet and was later one of the earliest members of the Egalitarian Christian Alliance. In these organizations, I received support for these “strange” beliefs that sometimes set compliant me in heart-breaking opposition to my church, and I found friendships that have stretched across continents and over two decades.

Oh…and that compliant girl? In some ways, she’s still here.

It’s taken a while, but she’s stepping outside the box to do things like becoming an advocate for refugees in Australia, and taking a real stand for biblical equality wherever God opens the door. 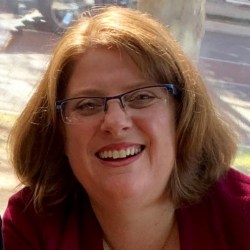 Bronwen is a Master of Theological Studies student at Vose Seminary, a graduate of Perth Bible College and the University of Western Australia, and a chaplain, wife, and mother. She remains passionately convinced of the power of the local church to bring hope and healing through love, truth, and authentic community in Christ.