The Origins of Sexism in the Church 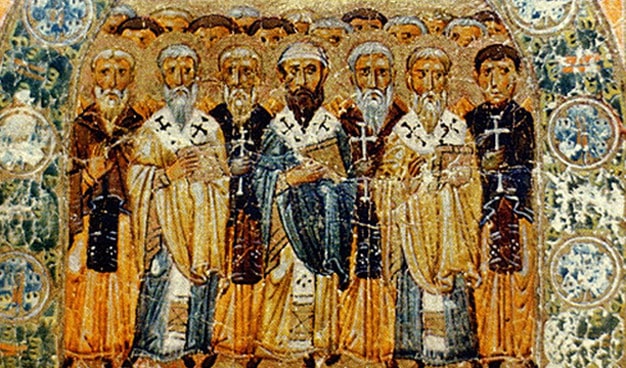 Is the doctrine of male authority in the church “God-ordained,” or does it have a more human origin?

To answer this question, I’d like to explore relevant evidence found in the writings of key philosophers, theologians, and modern-day complementarian leaders. Then I’ll follow up with an examination of key verses about men and women found in the Bible—both Old and New Testament.

Justice exists when the best born and best educated men exercise authority over the “lower classes” (children, women and servants):

“Let me further note that the manifold and complex pleasures and desires and pains are generally found in children and women and servants….  Whereas the simple and moderate desires which follow reason, and are under the guidance of the mind and true opinion, are to be found only in a few, and those the best born and best educated.”

“Very true.  These two, as you may perceive, have a place in our State; and the meaner desires of the [many] are held down by the virtuous desires and wisdom of the few.”

“Seeing then, I said, that there are three distinct classes, any meddling of one with another, or the change of one into another, is the greatest harm to the State, and may be most justly termed evil-doing?  This then is injustice.”

“You are quite right, he replied, in maintaining the general inferiority of the female sex….”[1]

Believed that Plato’s philosophy and God’s Word taught the same principles.  He also believed that this included the necessity of men ruling over women, children, and slaves:

“Simplicianus congratulated me that I had not fallen upon the writings of other philosophers, which were full of fallacies and deceit, ‘after the beggarly elements of this world,’ whereas in the Platonists, at every turn, the pathway led to belief in God and his Word.” (Augustine’s Confessions, Book VIII, Chapter II)[2]

“It is the natural order among people that women serve their husbands and children their parents, because the justice of this lies in (the principle that) the lesser serves the greater…. This is the natural justice that the weaker brain serve the stronger. This therefore is the evident justice in the relationships between slaves and their masters, that they who excel in reason, excel in power.” (Questions on the Heptateuch, Book I, § 153)[3]

Believed that women were literally saved from sin through the procreation of children:

And that the lot of a woman might not seem a hard one, [because of God] reducing her to the condition of a slave to her husband, the Apostle recalls the ancient law and goes back to the first example: that Adam was first made, then the woman out of his rib; and that the Devil could not seduce Adam, but did seduce Eve; and that after displeasing God she was immediately subjected to the man, and began to turn to her husband; and he points out that she who was once tied with the bonds of marriage and was reduced to the condition of Eve, might blot out the old transgression by the procreation of children (Against Jovinianus, Book 1, §27).[4]

Believed that all of the Christian faith was accurately explained in the writings of St. Augustine.  He accepted St. Augustine’s belief in a male-dominated gender hierarchy without question:

“Augustine is so wholly with me, that if I wished to write a confession of my faith, I could do so with all fullness and satisfaction to myself out of his writings.”[5]

“Let the woman be satisfied with her state of subjection, and not take it amiss that she is made inferior to the more distinguished sex.”[6]

Believes that men must exercise authority over women, and that the fall of humanity was caused by Eve not maintaining her proper place, in submission to Adam:

“Yet God made the man first, and he gives Adam a leadership role by asking him to exercise authority over the animals by naming them.”

“Everything falls apart in the fall. Adam fails to lead and protect Eve.  Eve is deceived by the serpent and assumes the role of leader (Gen 3:1-13).  In short, the fall itself involves an inversion of God’s plans for men and women.”[7]

Strachan identifies himself as a follower of John Calvin’s teachings.[8]

Believes that women demonstrate they are in fact “Christian” by submitting to male authority and embracing the roles of wife and mother:

Bruce Ware is also known as a Calvinist.[10]

In which men and women are equally created in God’s image, mutually dependent upon one another for their existence, and free from class distinctions through the redemptive work of Christ:

“Humankind was created as God’s reflection: in the divine image God created them; female and male, God made them” (Genesis 1:27, TIB).

Does the doctrine of male authority have its origin in the will of God, or in human prejudice?  Here is the evidence; I believe it speaks for itself.