Becoming an Egalitarian in Greek Class

Meredith and her husband Curtis share the interesting story of how he came to hold his egalitarian position.

She said:  I picked my seminary, in no small part, because it fully supported women in ministry.  They had decided the issue long ago, and so I expected to experience a learning environment that responded to me as a unique person, not as my gender.  This was indeed the case.

I studied theology in undergrad and went straight on to grad school.  Eager for a change of pace, I decided to start with the Greek Intensive.  It’s the only class you take for the quarter, which meant I could bank on three months without having to read a book or write a paper.  As a bonus, it was capped at 25 people, and became a great way to make friends as a new student.

He said:  I became an Egalitarian in Greek class.  While for some people changing core theological positions between declensions might be common, this was a unique experience for me.  Frankly, it wasn’t even Greek class itself that did it (sorry, Dr. Hill, I know you tried); it was someone I met in Greek class.  She was as surprised as I was.

It was an intensive class: four hours per day, three days per week.  We all saw a lot of each other, and got to know each other pretty well during class breaks.  I got to know one person particularly well, but most of that is another story. (#MeetCuteInBiblicalGreek?)

The part of the story that matters for now began during one of our daily breaks.  We had just discussed in class the fact that the passage starting in Ephesians 5:21 was all grammatically one piece, and should therefore be read together instead of being split apart as is often done by those who support strict gender roles.  She asked what I thought about it all and I said I didn’t really know.

She said:  We spent the breaks between class discussing topics from the scholastic to the silly, but on the day we talked about verb structures, I had just one topic on my mind–Ephesians 5:21, “Submitting to one another out of reverence for Christ…” Not ‘submit’ as a command.  And there was no verb in verse 22.  The English translations always begin with the verbal imperative, “Wives, submit…”  In the Greek, it wasn’t there.

I was already an Egalitarian at this point, and had read a fair number of books and articles on the issue, both as it related to ministry and marriage.  But somehow this passage had not been presented in this way yet. (Probably because it requires knowing a bunch of stuff about how Greek works.) It felt like the last piece of a puzzle snapping into place.  It was an a-ha! and a relieved ahhh all at once.

My new friend did not really understand why I was so invigorated after this particular session, and asked about it.  I did not really know how he would react to what I was thinking, so I started with, “What do you think of all that?”

He said: I grew up in Evangelical settings, sometimes in churches that would have supported women in leadership, sometimes in churches that wouldn’t.  But I didn’t have much of a settled opinion on the matter.  I didn’t need to.  I was a man.  That’s the beauty of privilege, of course: you don’t need strong opinions on issues that don’t affect you.  And if you want to have an opinion you can make sweeping, theoretical pronouncements untroubled by distracting things like reality.

If I’d had to pick, I probably would have leaned towards some form of complementarianism, because isn’t that what those passages from the Bible that I heard someone talk about once, but haven’t given actual thought to, say?

She explained that those passages aren’t quite as obvious as they first seem, and that there’s a really good argument to be made that they don’t mean what some people say they mean.  She pointed out the absurdity of the “man is leader of the home” position when you get into the practical details.  So, what, a musician husband always makes the financial decisions for his accountant wife?  An engineer dad is supposed to read and explain Bible stories to his kids while his school teacher wife plasters on a supporting smile?

She asked where, exactly, the women whom God has given teaching and leadership gifts fit in the too-neat framework of complementarianism.  She pointed out that such women exist within Scripture itself.  She did all this in a very calm, reasonable voice.  It was only later that I found out how futile she believed this conversation would be.

Then she pulled the trump card.  She asked me what I would say to people like her, people whom God had called to ministry.  Had she heard wrong?  Had God made a mistake?  Had the “clear teachings of Scripture” slipped his mind in a moment of weakness?

She said: I had never had someone ask me what I thought about gender issues who was not seeking a debate.  It threw me off, but I tried to pull my case together and wade back into the discussion I’d had dozens and dozens of times already.

I started with creation, with God creating male and female in partnership.  Were roles part of the good creation or an effect of sin and brokenness?  I mentioned Deborah, Esther, Miriam, Junia.  What about Jesus’ female disciples, and the way he treated women in general?  I landed on giftedness.  Does the Spirit of God really only gift men to lead and teach?

He let me talk the whole time, lay out my whole case, no interruptions, save a clarifying question here or there.  I finished, the break was over, and we went to class.

He said: She had me.  What she didn’t know at the time was that I had written my undergraduate thesis using a similar logic.  I had studied the theological position of cessationists – those who claim that certain “miraculous” spiritual gifts, like healing or prophecy, stopped after the time of the Apostles.  I looked at what Paul had actually said about spiritual gifts, and found no reason one had to read those passages the way they did.  Then I looked at the presence of the gifts they dismiss throughout the history of the Church and into the present.  I questioned why they seemed so sure of how God acted in the world when there seemed to be very tenuous Scriptural support and abundant evidence to the contrary.  Holding to neat theories is easy; holding to them in the face of reality is much harder.

I said I’d have to think about it, and we headed back into class, she assuming that our friendship was about to end.  I didn’t learn much Greek in the next hour, and when our next break came she asked why I had been staring at the wall the whole time.  I said I’d been thinking about what she had said, and that I thought it made sense, that I agreed.  She didn’t quite know what to do with that; her arguments had never worked before.

She said: For the second half of class, Curtis was totally tuned out, something he could afford because he’d taken some Greek in undergrad.  We sat on opposite sides of the room, and I needed all the instruction I could get, so I had no opportunity to ask what he was thinking.  But as soon as the lesson was over, I did.

“That makes sense,” he said.

“What makes sense?” I asked.

“What you said about women.  That makes sense.  I believe you.”

You what?  Just like that?  What was especially remarkable to me was that he never looked back.  With the foundation of the case I’d made, he began to study scripture on his own and kept seeing egalitarian themes.  He defended the position in classes and on papers.  He enrolled in David Scholer’s famous Women, the Bible and the Church course.

And eventually, he married me. 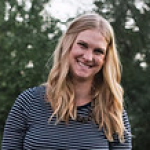