Mary and Martha: Sister vs. Sister?

I grew up as the only daughter and only granddaughter on both sides of my family. But in the past 21 years I have had a crash course in what it means to be a sister through my four girls.

I have learned that sisters can be very similar and still very different. No matter how many times this one may borrow that one’s sweater, she will never know when it was ok to take it without asking. I have learned they may fight with you at home but anyone else will have to deal with them first hand if they speak poorly about you.

I have learned that even the best of sisters try hard not to compare themselves to each other, but often fall into this trap anyway.

Consider the story of Mary and Martha.

38 Now as they went on their way, he entered a certain village, where a woman named Martha welcomed him into her home. 39 She had a sister named Mary, who sat at the Lord’s feet and listened to what he was saying. 40 But Martha was distracted by her many tasks; so she came to him and asked, “Lord, do you not care that my sister has left me to do all the work by myself? Tell her then to help me.” 41 But the Lord answered her, “Martha, Martha, you are worried and distracted by many things; 42 there is need of only one thing. Mary has chosen the better part, which will not be taken away from her.” Luke 10:38-42, NRSV

In the Church we have often compared these sisters to ourselves and others.

I have been asked more than once, “Are you a Mary or a Martha?” We have taken this passage and either defended Martha for her gift of hospitality with attention to details or we have defended Mary while condemning Martha for missing the moment at the feet of Jesus.

This story in scripture is sometimes presented as a personality test in the back of a woman’s magazine. We circle the answers and then we are all divided into group A or group B. I think the real issue is missed altogether. It is not a passage about about the personalities of women in general, but about the position of these particular women in relation to each other and to Jesus.

In my discussions about Biblical equality I find that often our own sisters in Christ can be our worst enemies.

I have encountered women who are a strong voice against other “sisters” who are led to step out of the traditional roles. Traditionally, Mary should have been in the kitchen helping Martha. Martha was doing the right thing culturally and traditionally. She understood her place and her role in society, and the assumption is that she felt comfortable in that role.

Mary took a different position that day by sitting at the feet of Jesus.

She took the position of a student to the Rabbi. As a student at the feet of Jesus, she may have been the only woman in that room. Her radical move to leave the culturally accepted norm and move out into a place reserved for men was unheard of in that day and age.

Most of the men in that room probably agreed with Martha when she made her complaint. Yet, Jesus defended Mary telling everyone in that room when he responded to Martha, “Mary has chosen what is better and it will not be taken from her.”

Jesus did not tell Mary to go back to the traditional role.

He did not condemn her.  He allowed her to be a student at his feet and by allowing this, Jesus allowed her to be an equal with the men in that room and of that culture. Like Rosa Parks, she chose her seat and it would not be taken from her.

I hear the voice of Martha today in the voices of women who feel threatened or convicted by those who have moved into less traditional ministry roles.

This passage affirms all of our differences and all of our gifting from the Holy Spirit. You will notice it does not discriminate by gender but says, “There are different kinds of working, but in all of them and in everyone it is the same God at work”. Scripture also tells us it is unwise to compare ourselves to one another. (2 Cor. 10:12)

If you have taken the magazine personality test and have come up a “Martha”, then by all means be Martha! The church needs Martha.

But do not speak against your sister Mary.

Do not hold her back from what God has called her to do. Do not be afraid for your sister Mary. Do not be anxious about her position or authority.

Instead, pray for her efforts, for her heart and for the Marthas that she will face. Because the same God who works in you is working in her and for the common good. Her place and calling does not diminish what you are called to do.

Knowing that Jesus commends Mary’s choice to position herself as student to the Rabbi, how much more should we in this present age take our place with confidence; not fearing the condemnation or questions from the Marthas in our lives – living out in fullness what God has gifted each of us to do.

Jesus affirmed and protected Mary’s place. He said she has chosen what is better.

And what is better? To be as close to Jesus as we can be. 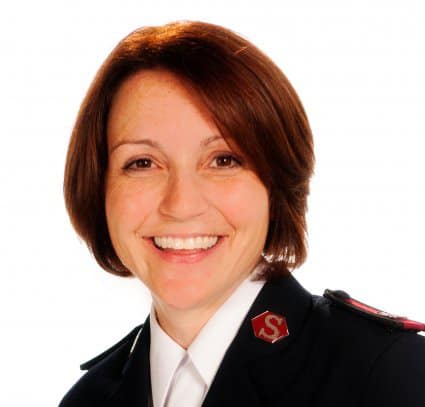 Lt. Colonel Bate is the Social Justice Consultant for The Salvation Army Eastern Territory. She has served in The Salvation Army since 1989 with appointments in the United States, Russia, Finland and the Republic of Georgia. Carole has spoken against oppression and the abuse of women around the World. In addition to her public speaking against Human Trafficking, she has preached in Australia, Latvia, Finland, Russia, Republic of Georgia and England. She is also the proud mother of four daughters.