Let My People Go: The Impact of Patriarchy in the Church 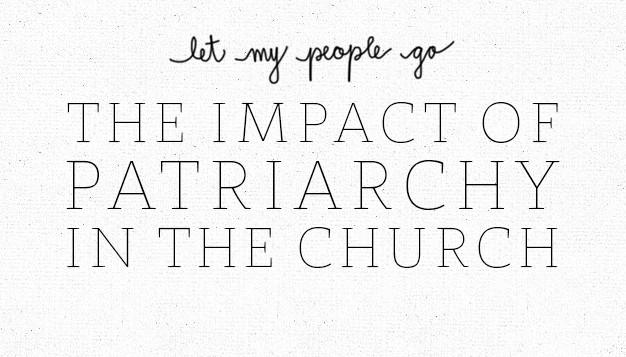 Patriarchy is an oppressive cultural norm with a history that predates Christianity.

Fortunately, it is fading from our global community. Unfortunately, it persists in some corners of the institutional church today, where some Christian leaders still teach that it is the God-given right of men everywhere to exercise authority over women at church and at home.

From my vantage point as a male social worker, psychotherapist, and former department head at a multi-denominational Bible college, I’ve had many opportunities to observe how patriarchy impacts people every day on a very practical level.

Once, while giving a lecture on gender socialization, I asked students to share their views on the roles of men and women in the home. What I heard was not surprising, but I still felt shocked and saddened. Men, I was told, have the “final say” over everything that takes place in the home. In the event of a disagreement, a wife is expected to submit to her husband’s point of view. Men are responsible for managing the family’s finances, and presumed to be the chief wage-earners. Furthermore, they are in charge of disciplining the children, and providing spiritual guidance to everyone in the family.

When I asked students to identify the source of these ideas, one confidently declared, “They’re biblical!”

I asked the same question in a different class and received a similar response. With this class, however, I asked them to look in the Bible for clear instructions that men are to perform all of the roles that had just been assigned to them.  I also asked them to search for evidence that women were to be precluded from these activities. As you might expect, they did not find this evidence. They found verses related to the concept of “headship”, but they did not find clear explanations of how this was to be implemented day-to-day in Christian homes.

They recognized that they had filled in the gaps with role descriptions that were part of their institutional church traditions.

During a chapel service a young man walked out angrily as a woman took the podium to give the message. He looked to be about 19 years of age. She was an exceptional speaker with a master’s level education, but was apparently disqualified in this young man’s mind, solely on the basis of gender. Sadly, this was not an isolated event, as more than one student verbally expressed indignation about women teaching the Bible in chapel.

Observing the impact of male domination as a psychotherapist was also profoundly disturbing. I learned that many Christian wives are expected to submit to all of their husband’s sexual advances, as their duty before God. They are told that any failure to do so might cause their husbands to have sexual struggles ranging from pornography use to affairs or soliciting prostitution. Women who had been sexually assaulted, sometimes by a pastor, were often accused of bringing the abuse upon themselves by dressing inappropriately, or by being “too friendly” with a man.

My observations of the treatment of women in the church mirror my experiences as a teacher and a therapist. Attractive women who are newcomers may find themselves the target of male lust and female hostility. Women, in general, are told that teaching the congregation or holding leadership positions is beyond their ability. Their place is in the Sunday School, the nursery, or the kitchen. Even these roles, however, are subject to veto by a Christian husband.

Tragically, many women in the church do not have to imagine these things; they are part of their daily lives. A woman may be a deeply committed Christian, but as far as a patriarchal church is concerned, she will never, ever, be quite as spiritual as anyone who just happens to be a man. The message you’re given is that there’s something inherently wrong with you, even dangerous, simply because you’re a woman.

Malcolm (1982) provides a description of patriarchy in the church that aptly summarizes what I’m describing:

“Many women I have counseled have moved directly from a home where the father had the last word to a home where the husband played the same role. They first learned about their limitations as little girls growing up. Then as the men they married continued to treat them like children, the problem was compounded. Finally, if their churches do not encourage them to use their talents for others, they shrivel up in their service and often in their love for the Lord.” (p. 31)

I submit that this is not an accurate description of the life of freedom that was purchased for all people, men and women, through the shedding of Christ’s blood on the cross.

Simply put, it is not Christianity at all.

Adapted from Bob’s book: Let My People Go: A Call to End the Oppression of Women in the Church, Revised and Expanded (2013), available through Amazon.

(Ed. Note: For more on abuse in the church or the home, see the excellent series by Carolyn Custis James, Part 1 here, or Jenny Rae Armstrong’s post with additional resources, When Love Hurts.)