Confessions of a Closet Egalitarian

I had never heard the words “egalitarian” or “complementarian” until last summer.

The first of my true confessions. At 50 I’m a little late to the dance, but my 22-year-old daughter has been my inspiration and encouraged me to write this.

As a young wife in the late 80s and early 90s, I was bombarded with information about God’s designed hierarchy for the church and Christian home.

Magazine articles, radio shows, and whole conferences were devoted to teaching that wives should submit to their husbands in all areas, the husband is the head of the home, he had the final say in all decisions, and that a Christian woman’s job as a wife was to be her husband’s “helpmeet”. She was to support him in his work because that is where his self-worth came from, but hers should come from her home and children.

I learned that a godly woman should stay at home with the children, cooking, baking, and keeping the house clean, so when her husband returned home from work, he would have peace and tranquility. Women were not to teach or have authority over men in the church. This went against our culture, but it was God’s plan for His people.  The bible was clear on all of this, so if I questioned my role, I was rebelling against God’s plan for my life and Christianity as a whole.

My husband seemed comfortable with these guidelines, but nothing in my background had prepared me for this.

I was raised by a strong and capable single mom who worked hard to raise five kids. My dad, due to a traumatic head injury, didn’t have much of a presence in my life. I had grown up playing sports, being a team captain and leader. At school, I was chosen for many leadership positions from junior high on.

I didn’t start attending church until I was 16 and had never heard much about the whole idea of women submitting, except a little talk about how silly it all sounded. Some of my friends in college were religion majors and planned to be pastors and leaders in the church. (My former roommate is actually now in seminary!)

I had a degree in Physical Education and Health and taught while my husband finished school. When our kids were little, I stayed home with them but returned to work part-time when they were a bit older. I enjoyed (and still enjoy) teaching and using my education and talents. I couldn’t figure out why God would bless me with a full academic scholarship and give me a gift for teaching if He didn’t want me to use that gift.

I love my children and am glad that I was able to be home with them so much when they were growing up. I also believe that it was good for the kids to see me working and contributing financially to the household as well as to learn how to pitch in and help around the house. My husband and I had a few clashes over roles, but we managed to figure out a balance that we could both live with.

We attended a church for many years that encouraged women to serve freely. We had a woman children’s pastor and women in all areas of leadership, including the elder board. The ordination of women was a hotly debated topic in the denomination, but aside from senior pastors, women served in every capacity. The church taught that men were the heads of the home, but balanced with Ephesians 5:21, “Submit to one another out of reverence for Christ”. I served on various committees and in several roles in the 17 years we attended there and always felt valued.

Then last summer, we moved to a small town with very conservative churches.

At first, I thought it was just that – conservative and a little old fashioned. The pastor at the church we settled into spoke on marriage and taught the same things I’d been taught as a young wife. Women are not allowed to do much in that church except play music, lead women’s groups, and teach small children. My daughters pointed out that there were no women in any leadership positions. I countered with everyone was friendly, and it was okay, they were just really conservative.

But (confession #2) what I didn’t tell my daughters, or anyone, is that this church’s teaching on gender roles “as designed by God” brought to the surface fears that I had been hiding for over 25 years.

Fears that I really was a “second class citizen”, and that God wanted it that way. That ignoring “clear” commands in Scripture to be completely submissive to my husband, for women to not teach men, or hold leadership positions was rebellion and sin; that, because I am a woman, I am not worth as much as a man; that the church is really only for men and that women are only along for the ride. The words “brothers”, “man” and “he” implied that God surely did favor men. I always told myself that those words included me, but a nagging voice told me that I am really not a brother, a man, or a “he”. And I wondered how many other women my age secretly worry about the same thing.

Then one sermon turned my fears into anger. The pastor preached about “the infancy of the church”, using Acts 16 as his text. This passage talks about Paul and Silas going to Philippi and speaking with a group of women on the Sabbath. Lydia “was a worshiper of God” and she responded to Paul’s message and became a believer in the Lord. She invited them to her house and they accepted. Later, when Paul and Silas got out of prison, they went to Lydia’s house again.

The pastor completely ignored Lydia, and the only thing he said about the women was that “obviously God would not start a church with women”.

He claimed that several prisoners who were with Paul and Silas must have come to the Lord since a church was started there (“so important is male leadership to God”).  I lost it, furiously writing notes to my husband about the pastor adding things to scripture that aren’t there and ignoring the women who were there.

I came home and started reading commentaries on Acts 16. Every commentary praised the faithful women. From there I jumped into researching mistranslations of Greek words – things like the word for “siblings” translated “brothers”, gender-neutral pronouns translated as “he”, the word describing Phoebe as a “deacon” translated as “helper”.

And it hit me. God wasn’t the one who had excluded women.

God hadn’t inspired the writers of the New Testament to only address men. God doesn’t only use men. I was happy and MAD.

• Who did this? Why? Why do Greek scholars ignore it?

• How can pastors pray about their sermons and claim they are speaking for God when they don’t know what God’s word really says?

• If I can research and figure out what the Greek says and discover the historical contexts of Ephesians and Philippians, why can’t pastors?

• Why are churches continuing to teach error and wounding faithful women?

• Why is there not an accurate translation of scripture that corrects these centuries-old mistakes?

My fierce sense of justice and fairness kicked in. I can’t sit here quietly and take it.

While I don’t feel called to be a pastor or hold an important office in a church, there are women who are called, who need to be allowed to answer that call without being told they are rebellious or trying to “usurp” the roles of men.

I am starting a quiet campaign to educate women that they are important to God; that they don’t need to experience the fear that I buried for so long. Sadly, I’ve already noticed a hesitation to even talk about such things among women my age.  I’ve been told to “be careful”. One woman looked at me like she wasn’t sure if I was a heretic or a lunatic.

I still have more questions than answers.

I loved reading Sarah Bessey’s “Jesus Feminist” and wholeheartedly agree with her take on “God’s radical notion that women are people too”. I’m not sure that I am ready to embrace the word “feminism” yet – at 50, the word brings up negative connotations and images.

But I am ready to embrace the fact that God did not make a mistake when He created me to be a woman. He sees me as His precious daughter, fully equal to His precious sons. 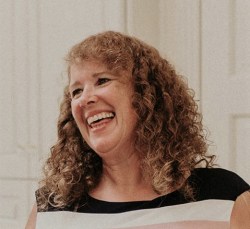 is a Physical Education teacher, wife, mom, and friend. She graduated from Warner Pacific College in Portland, OR. She lives in Colville, WA, where she is learning the ins and outs of country life. Cooking is more of her comfort zone than writing for blogs!