On Being a Jesus Feminist

Not long ago, for the first time, I used the word “feminist” to describe myself.

Not because something radical has changed about what I believe about women and men, but because I’ve realized that I’m no longer interested in hiding from a word in order to avoid other people’s ideas about that word.

Of course, it’s not quite fair to say that nothing has changed.

I listened to classmates declare that they have gotten “Him’d” out of male depictions for God.  I announced my intention to refer to the Holy Spirit as “she” instead of “he” or “it.” (“You’re one of those people,” responded a friend.)

I realized that I can’t stand words like “brotherhood” to describe the Christian family, and I cringe when a song refers to “men” and means the whole body of Christ.  I have even started to wonder about words like “fellowship.”  (I’m not a fellow, after all; can I still have fellowship?)

When a popular Christian musician replaced “men” with “saints” in a carol on his Christmas album, I stopped rolling out pie crust to share my excitement with my husband.

“Did you hear that?  Let saints their songs employ! Saints, not just men!”

I have started to read blogs of women like Rachel Held Evans and Sarah Bessey, women who claim “feminist” as a description for them, too. Several months ago, I encountered Bessey’s book, Jesus Feminist.  She writes about how “following Jesus made a feminist out of her.”

Apparently, following Jesus is making a feminist out of me, too.

This newly recognized-and-openly-named feminism keeps popping up at the most inconvenient times, making me wonder if there isn’t a way to shut it off, at least temporarily.

Buying Christmas cards this past year was even more of an ordeal than it usually is.  My husband and I have always scoured the cards in order to find ones with art we like, but this year I rejected more than one hopeful because of the message inside. Things like, “May His light shine on you always” or “May He bring peace and love to you” or “Let your hearts be filled with Him so that His grace may be with you now and always.”

I had no idea that Christians had decided it’s okay to replace God with a deified, uppercase He/Him/His.  Many of these cards did not even name God, instead offering those capitalized male pronouns as if that communicated the same thing as God’s name.

This woman, this Jesus feminist, this Christian isn’t going to settle for that any more.

I am a feminist for women long gone who fought to give me the right to vote, to own property, to speak my voice.

I am a feminist for mothers and grandmothers who raised children in the hope that their daughters might not face the same prejudice they endured.

I am a feminist for the sweet and precious little girls in my life who should not have to live in a world where women are ignored or belittled for no reason but their gender.

I am a feminist for the Church, that it might be the full and vibrant body of Christ in the world.

But aside from all those things, I am a Jesus feminist because my faith compels me to be. Because I believe that Jesus Christ has called men and women to partnership and equality in doing the work of the Gospel. 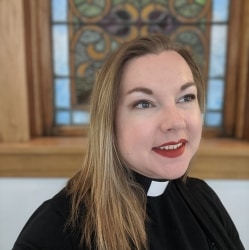 Beth is the Pastor of Trinity Evangelical Lutheran Church and has a passion for sharing God’s love with the world, including speaking out on issues of women in ministry. She has a Master’s of Divinity from Luther College. She currently lives in Tipton, Iowa with her husband, J.W., and son, Luke.