Miss & Carry: Towards a Theology of Unrealized Motherhood

The first time I got pregnant it was unplanned. My husband, Ben, and I were living in my parents’ guest bedroom at the time, in the middle of our first year of marriage. We were both in-between jobs and graduate school and not having any idea what we were doing. However, the prospect of a baby-to-be was so grounding – in the midst of our uncertainty was the promise of new life and a goal for us to focus on. We waited until I was all of eight weeks along before we made the announcement to my entire extended family on the first day of our annual camp out-reunion at the Jedidiah Smith State Redwood Park.

The day after the announcement I woke up with a tiny spot of blood in my underwear. I ignored it, refused to give in to the worry that sat at the edges of my mind. I mentally reviewed all the normal pregnancy symptoms that I could think of. Spotting is normal. Nothing to worry about here.

But by the time noon rolled around I was sitting at the river’s edge trying to breathe my way through cramps (that were really contractions), and blinking away tears behind my sunglasses, because by now I knew that something was wrong. My mom came and sat beside me and asked me what was going on. I told her that I was pretty sure that I was having a miscarriage.

We walked back to our campsite and someone ran up the river to tell my husband. Ben met me at camp, and we laid on the air mattress in my parents’ tent and cried ourselves to sleep. The next morning we went home, made an appointment with the doctor, and cried to each other off and on as I continued to miscarry throughout the rest of the week. Then it was over.

Not everybody miscarries like this – in the middle of the woods, sans medical intervention, making dozens of trips back and forth to state park public toilets. I know women who have lost their babies before their bodies told them, who found out on an ultrasound, who underwent surgery. Either way, it’s utterly devastating. I would never wish a miscarriage on anyone.

Miscarriage is such a lonely type of loss, invisible for the most part, and not commonly talked about. But what I desperately needed in those days and weeks and months after was someone to tell me that I wasn’t alone. I needed a voice of solidarity. Eventually I found just that. Once I was able to say the words out loud, that I’d had a miscarriage, a chorus of “me-toos” rose up. Other women – my peers, my mother’s friends, friends of friends had all experienced this particular kind of loss.

In the midst of those stories were others as well – women who had been trying for weeks and months and years to get pregnant, with a collection of negative pregnancy tests to show for their efforts. Women who had sought out answers beyond pregnancy tests, and been told that they could not and would not get pregnant – not now, not ever. Women who were pushing through the red tape and piles of paperwork to get approved to foster or adopt, waiting for the phone call from the social worker.

I did not anticipate that my search for solidarity after miscarriage would reveal something this big – a collective grief that eclipsed my own singular experience. I also did not anticipate that the comfort I found in these stories, in the familiar ache of something so desperately craved and lost, would be incomplete in helping me move through my grieving process. I spent so much time carrying around the stories of these women, and my own story of grief and loss, but something was still missing – an unmet need tucked into all those layers.

After much consideration and reflection, I realize that the missing piece is this – we need a better theology of loss around this topic, or more specifically, a theology that addresses the grief and pain of unrealized motherhood.

The church has a lot to say about mothers, with the emphasis being that motherhood should be something that women aspire to. I’ve heard praises sung for mothers, and their efforts, and heard the stories of mothers in the Bible lifted up. But I have yet to hear a sermon that talks about the hardships that mothers face beyond laundry and wrangling toddlers.

Where would the church even start to come up with a theology of the grief that accompanies the subject of motherhood?

As with most things, the best place to start is at the beginning, in Genesis 3:16:

To the woman he said,

I will surely multiply your pain in childbearing;
in pain you shall bring forth children.
Your desire shall be for your husband,
and he shall rule over you.”

I’ve always assumed that the first part of this verse was clearly translated to refer to physical discomfort during labor and delivery. I’ve seen it skimmed over and dismissed in favor of the second two lines, or have heard it jokingly referred to by women bemoaning their menstrual cycles. Since miscarrying, I’ve experienced pregnancy and have been through labor and delivery, and the physical pain that I felt then was nothing compared to heartbreak and grief that I experienced with my miscarriage.

It turns out that this translation (and many others) does a poor job of capturing what is expressed in the original Hebrew. The first use of the word “pain” in this passage can also be translated to mean labor (as in work), hardship, or sorrow. It does not refer specifically to physical discomfort. The second use of the word “pain” can also be translated differently, as either hurt or offense, or toil and hardship. The word “childbearing” is understood to refer to conception or pregnancy, rather than the event of labor and delivery. Likewise, the phrase “bring forth children” also refers to more than the event of childbirth – the wording here means “beget”, which refers to the process of generating children and bringing them up.

Given all of this, it would make more sense if the first portion of this verse read,

I will surely multiply the hardship and sorrow associated with conception and pregnancy, and the process of generating children and bringing them up will involve hardship, work, and emotional pain.”

When we miss the full meaning of this passage, we, as a church, miss out on creating a space that allows for the hard things associated with motherhood. Women miss out on being fully known and understood by their spouses, families, and friends. Men miss out on the opportunity to walk alongside and carry the weight of this grief with the women in their lives.

So much is missed when the voices of women are ignored in the translation of scripture. In the case of this passage from Genesis, neglecting to take into account the lived experiences of women results in a stunted understanding of the text. If our aim as followers of Christ is to know God and to make him known, we need as thorough a knowledge of the Word as possible, and we need to add female voices to these conversations.

In the struggle for gender equality in the church it is easy to focus on the latter half of this verse and the brokenness that has occurred between men and women. It is easy to ignore the first part because motherhood can be challenging territory for those of us who identify as egalitarian.

In an effort to move away from the idea that motherhood is the end all and be all of a Christian woman’s value and purpose, we may inadvertently minimize its significance for many women. Perhaps even more significant than these things is that when we focus all of our efforts on redeeming a patriarchal system, we can overlook the fact that a key portion of the female experience needs redeeming as well.

My hope is that as the community of believers we will learn to mourn with those who mourn and share in carrying the burdens of unrealized motherhood.

Posted in Personal Stories, Women and Relationships, Women and the Church
Tagged as Childbearing in 1 Timothy 2 // marriage and family // parenting 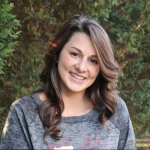