The Many Female Followers of Jesus

Jesus had many female followers.

I read Matthew 27:55-56 recently and saw something I had not noticed before.  There were many female followers at Jesus’ crucifixion – many.  I had previously imagined that only a few women had accompanied Jesus and made the trip all the way from Galilee to Jerusalem – usually a journey of several days.

Luke speaks of certain women who had accompanied Jesus during his itinerant teaching and healing ministry.  In Luke 8:1-3, he wrote that women travelled with Jesus and provided for him out of their own resources.  Like Matthew and Mark, Luke identified just three of the women: Mary Magdalene, Joanna the wife of Chuza, and Susanna, but adds (in verse 3) that there were many other women in this group.

Many women were dedicated followers of Jesus during his ministry on earth.  Many of these women seem to have been independent of fathers and husbands, and some were independently wealthy.  These women left the relative comfort of their homes and travelled in rough conditions to faithfully follow and serve their Lord.  There is little doubt that Jesus welcomed these women and valued their ministry.

Jesus did not shy away from female company.  He had several, perhaps even many, close female friends, women such as Mary Magdalene, Joanna, Martha and Mary of Bethany, etc.  And he continually showed kindness and respect to the many other women he encountered during his ministry.

I’ve often pictured Jesus roaming around Galilee with just the Twelve, but on several occasions, at the very least, there were many women with him also.  How many is many?  10, 20, 30, 40, or more? Did the women disciples outnumber the men?  We can only speculate as to how many women were among Jesus’ followers. (Cf Acts 1:13-14.)

One thing is certain: throughout the last two millenia many more women have continued to follow Jesus and serve him.  And Jesus continues to welcome their company and value their ministry.

YOUR TURN: When did you first realize that Jesus had many women followers? How has that impacted your faith journey?

Read more about women disciples in these posts: Were the Disciples Unschooled, Ordinary Men? and The Life and Times of Mrs. Zebedee.

A note about the artist: When Gail’s parents served as missionaries in Japan they discovered the work of Sadao Watanabe (1913-1996), who converted from Buddhism to Christianity at 17 years old. He expressed his faith through traditional Japanese stencil dying (katazome), saying ‘My task is to stand within the artistic tradition of Japan…Theology will not take deep root in Japanese soil if it is merely an import.”  Read more in this post by Makoto Fujimura.

This article was first published at newlife.id.au. 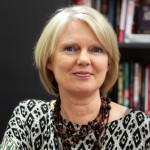