I Didn’t Choose to Become an Egalitarian

I’m a southern girl, the middle child, one of three daughters in my family of five.

My daddy gloried in raising up three, strong-willed women.  He taught us early on to assert ourselves, with frequent reminders to never let anyone walk all over us, to stand up for ourselves because we mattered.  He believed we could do anything we set our minds to, challenging us and giving his all as he raced us around the go-cart track, pushing us to play our best during family basketball games, never taking it easy because we were girls.

I admired my dad and longed for his approval, and there was never a moment from my childhood, adolescence, or adulthood when I didn’t receive it. When meeting others, he introduced my sisters and me with the pride of an Olympian, placing his arm around our shoulders and smiling down on us, his three gold medals.

Did my dad’s ability to see beyond my gender to my soul shape my views on my place in the world?  Did I subconsciously apply the complete, direct access I enjoyed to my dad’s love as his daughter to my Father God’s love, as well?  (Ephesians 2:18)

Growing up in the mountains of North Carolina, I was surrounded daily by the beauty of God’s creation. Long hikes up steep trails to the top of Grandfather Mountain left me panting and sweating, breathless from the exertion of the climb.  Standing triumphant at the peak, I tried to catch my breath again as the bigness of God’s creation left me in state of speechless awe.

Did observing the beauty of God’s creation remind me of my own beauty?  Did standing among the peaks of towering mountains help me realize my prominence in the eyes of God? (Matthew 10:31)

As a literature major in college, I read about strong, heroic, female protagonists. Through Jane Eyre’s self-assertion and independence during the Victorian era in Jane Eyre and Scout Finch’s rebellion against gender stereotypes of the 1930’s in To Kill a Mockingbird, I found myself relating on a deep level to each character’s trials and frustrations.  I identified with their desires to simply be who they were born to be during time periods when societal expectations limited women and stifled their natural desires to participate fully in a patriarchal world.

Did the ever-present struggle for equality which permeates many classical and modern works of literature help me better understand my own internal desire to assert myself in every arena of my life?  Did the tenacious spirits of Elizabeth Bennet in Jane Austen’s Pride and Prejudice or Jo March in Louisa May Alcott’s Little Women remind me so much of myself that I began to feel less alone and marginalized in my desires for liberty?

After a failed marriage, I recommitted my life to a man who loves and accepts me for me. Standing together on a scorching day in July, I vowed to love him, to cherish him, and to remain faithful and true forever; I did not, however, vow to obey him.  He didn’t want me to make a promise of obedience any more than I did.  From the beginning of our relationship, we have assumed equal roles as partners, never bartering out expectations on things like submission or assigning man-made roles and titles like spiritual leader and headship.

My husband doesn’t expect me to shrink smaller, quiet my voice, or climb down a few notches on a patriarchal spiritual ladder to prove to others we are engaging in a Biblical marriage.

We have naturally partnered in every facet of our parenting and marriage, each of us submitting to Christ’s will, losing ourselves, not for each other, but for Christ only and always.  Our marriage reflects the true beauty of partnership in that we recognize the value of sometimes allowing the other person to lead.  It’s an ebb and flow; it’s fluid, organic, and free.

When I’m down, I relinquish the reigns for a while, trusting in where my husband will lead. I fall back for a bit and take refuge in his shadow; when I’m well and my strength has returned, I step out of his shelter and back into the void by his side.  When life becomes too much and he needs a respite from the demands of his life roles, he knows he can do the same.  After those breaks, those rests, we resume our walk together, side-by-side, hand-in-hand, partners until the end.

Did falling in love with someone who values and respects the very character traits which fuel others’ perceptions of me as a failed example of Biblical womanhood reaffirm my equal value as a daughter of God?  Did marrying a man who fosters my freedom within our marriage further verify my complete freedom in Christ? (2 Corinthians 3:17)

In April of 2007, I had my son. I never knew love like the love I felt when I held his squirming, slippery body against my own, his tiny wails piercing my heart, causing an ache so deep I thought it might explode.  During the three years when my son was the only child, I learned a lot about love, particularly the love of a parent.  Parental love is fierce, incessant, and all consuming.

Having my daughter taught me it’s also without bias and without hierarchy. When I stared through my tears at my daughter’s blurry, beautiful face in March of 2010, the love I experienced was equal to that of her brother.  An identical space opened in my heart where my love for her grows with the same fervor as my love for my son; it’s just as fierce, just as incessant, just as consuming.

I have a son and a daughter, but like my dad, I see past their genders to their souls.  I see each as a part of my husband and me, a creation purposed from the same union of love.  Each is fearfully and wonderfully made (Psalm 139:14).  Each is gifted with talents capable of changing the world (1 Corinthians 12: 4-6).  Each is a child of God, created in the same image and with the same love (Genesis 5: 1-2).

Is this how I became an Egalitarian?

Does my inability to imagine and expect less of my daughter further my understanding of a fair and just God? Does observing the equality of my own love for my son and daughter affirm the equitable love of our Creator for all of His children? Galatians 3:28

Looking back, I can’t pinpoint the specific moment in time when I assumed the title.  Perhaps that moment doesn’t even exist.  I think for me, the evolution of my spiritual journey has resulted in a faith which denotes all aspects of egalitarianism. For as long as I can remember, that still small voice has spoken softly affirmations of my worth.

Through the unconditional, unbiased love of my dad, the Holy Spirit whispered, “You are loved” (John 3:16).

Standing breathless at the top of Grandfather Mountain, the Holy Spirit murmured, “I have purposed you in my heart” (Isaiah 64:8).

Partnering with my husband as a spiritual leader in our home, God assures, “Bring me my son and my daughter.  The fruit of your labor is good” (Isaiah 43:6).

Seeing each of my children as God’s image bearers, equally powerful and important and free, I hear the sigh of the Holy Spirit, “Yes, yes, this is right.  This is truth.  Carry on child of mine, carry on” (Matthew 28: 18-20). 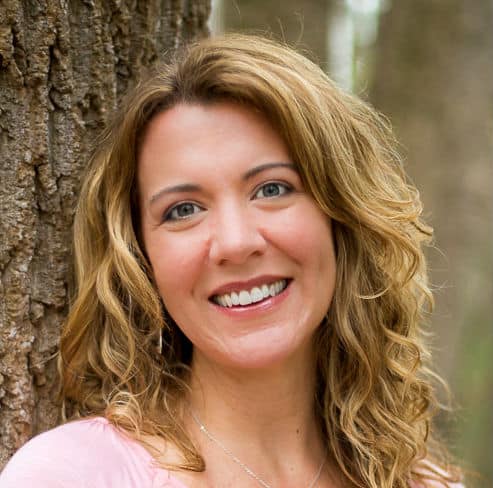 is a National Board Certified teacher of English/Literature in Cary, North Carolina. When she’s not playing PIG with her son, practicing cartwheels with her daughter, or going on long runs with her husband, she enjoys perusing antique stores, thrift shops, and flea markets for treasure. She also searches for God’s treasures on life’s journeys through her writings, which can be found on her blog www.girlgonejunking.com (click Carrie's name to access her website).