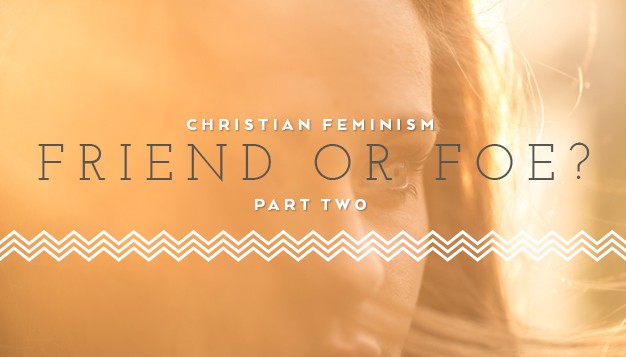 As we saw in the previous post, a recent article by Matt Walsh argued that feminism is unnecessary for Christians. Today I want to examine the second objection that Walsh raised (with the understanding that I am picking on his article because it represents a widely-held view among many Christians).

His second question is equally legitimate and deserves a serious answer: Even if feminism is not redundant to the Christian faith, is it worth it, if it comes with so much baggage?

He brings up several different points included in this notion of baggage. Let’s start with abortion.

Like many other Christians, Walsh is suspicious of feminism because it has ties with the pro-choice movement. Lots of people feel too uncomfortable with that connection to identify as feminist. That is their right and I’m not trying to gloss over how seriously people take that issue.

But Walsh goes further and claims that no Christian anywhere should hold a different opinion. His claims make it sound as though abortion is about 95 percent of feminism’s purpose:

“The concepts are contradictory, [feminists] argue, and I agree — though I’d say the term ‘pro-life feminist’ could be more aptly compared to ‘abolitionist slave trader’ or ‘free market communist.’”

I disagree. I believe that feminism’s main focus is to explore the ways in which society has unhealthy beliefs about gender. That can include beliefs about the rightness or wrongness of abortion, but abortion certainly is not the only (or even main) focus for most of the feminists that I deal with in everyday life. And it is certainly not the only social concern that feminists are working to affect (other concerns include sex trafficking, female representation in government, and the portrayal of women in the media).

Most of the feminists that I speak with talk about unfair policies toward women in the workforce; about the horrors of rape culture; about expectations for how women should dress and act; about dynamics between husbands and wives, etc. Those are the issues they seem most concerned about, and those are the issues being broadcasted by feminists in the wider media.

Now, I don’t want to be disingenuous here. There are indeed some (many?) feminists who don’t believe you can be a feminist unless you are pro-choice. However, the reality is, there are feminists who agree on every other issue except abortion. Those people do exist, and I see no law or Gestapo preventing pro-life Christian women from identifying as feminist.

Again, if someone feels differently, s/he has every right to reject the feminist label. But where I think the line is crossed, is where that person tells other people that they are not allowed to see feminism as being about more than abortion, just because s/he doesn’t.

Another criticism that is often brought against feminism is that it doesn’t square with a complementarian view of the sexes. “Complementarianism,” a term coined in the 70s, is the belief that God ordained a high degree of difference between the sexes and intends men for one type of “role” and women for another type of “role”. Men are leaders; women are supporters.

I think a belief in complementarianism is why Walsh said this:

“To be equal is to be the same. Women are not equal to men because they are not the same as men. Therefore, a woman’s freedom is really slavery if it forces her to abandon all of the unique feminine abilities and characteristics that make her a woman. The same could be said for men, if his freedom requires him to shirk that which sets him apart from women and makes him a man.”

The problem with using complementarianism to prove that feminism is un-Christian is, of course, that not all Christians are complementarian! Many Christians believe in mutual submission between husband and wife, in the leadership capabilities of women, and in the rights of husbands and wives to divide traditionally feminine and masculine “roles” within the home however they want. As for not being the same, Adam’s delight with Eve was because of her sameness to him, not because of her difference. “Then the man said, ‘At last, here is one of my own kind—bone taken from my bone, and flesh, from my flesh.” (Genesis 2:23, Today’s English Version).

And while we’re on the subject…why does Walsh get to define what feminists mean by the word “equal”? He seems to think it means “having no difference in their essence.” Most Christian feminists do accept a difference in gender makeup but that has nothing to do with what they mean when they say “equal.” The word “equal” is most often employed to mean equality of opportunity. It’s bad rhetoric for a writer to claim that the term must mean interchangeability when the people he’s arguing with don’t use the term that way.

As to Walsh’s other points, I simply disagree. They read like the caricatures of second-wave feminism that preachers crafted to scare parishioners during the 70s and 80s. For example:

“From the very beginning, at its earliest stages, feminism was a movement designed to find equality with men — and then dominance over them. Christianity has always taught harmony and love between the sexes, while feminism preaches competition and exclusion.”

This was the point at which my patience evaporated. The Scarecrow from The Wizard of Oz was less a straw man than this argument. I don’t know any feminists who want dominance over men or treat men that way. Feminist culture is actually against such things, believing men and women to be equal in value and capability, with neither deserving to dominate. It is dangerous to equate the pursuit of equality with grasping for dominance. By that reasoning, you’d have to say that the Civil Rights movement was about black people wanting to dominate white people.

And as far as competition and the destruction of harmony…do you know where I learned to roll my eyes at men, bash husbands behind their backs, and believe that “Men are from Mars; Women are from Venus?” From pop culture and, ironically, from watching other Christian women. In fact, the women I’ve known who were the most prone to hold bitterness against men were women who were farther along the spectrum of anti-feminism.

It was feminism that helped me see the destructiveness of such behavior. Feminism helped me see that harmony can exist between the sexes, and trained me out of the eye-rolling and husband-bashing that women are expected to engage in. Other feminists are often the first to join me in complaining about commercials and shows that make dads look stupid and inadequate; they’re often the first to insist that rape culture degrades men, too. And let’s not forget that plenty of happy, confident, well-adjusted men are feminists.

I realize that harmony between the sexes is God’s intention, and lines up with Biblical truth (Galatians 3:28, anyone? Ephesians 5:21? Or how about Eve being an “ezer kenegdo“?) But the rhetoric of feminism helped me to see the truth that was already there, and gives me language to explain myself when pop culture (and yes, church and complementarian culture) wants to re-introduce elements of competition.

Walsh also mentions a lot of hot-button phrases, such as wedges being driven between husband and wife, and chasms being opened between women and their children. But in my experience, these kinds of marital and family troubles come just as easily to people who don’t identify as feminist as those who do.

The bottom line is that no one must identify as a feminist. I really, truly respect people who are uncomfortable with the term. But if you’re going to attempt to convince everyone else that they should be uncomfortable too, you need to fight fair and have good reasoning behind you.

Posted in General
Tagged as feminism