On Being a Female Chaplain in the Military

I just spent six weeks with a group of 21 other Air Force chaplains. All 21 were male. I’m a female chaplain in the Air Force Reserves (which means I serve a minimum of about 30 days per year at my base) and the six weeks were spent at a training assignment fulfilling educational requirements.

It was suggested to me during this course that I shouldn’t “draw attention” to the fact that I’m a woman. I should be clear: this was said not as a way to quiet my opinion or invalidate what I have to offer. Rather, to refrain from calling out my specific uniqueness in the group. I have mixed feelings on this.

As I develop my theology of chaplaincy, I find that I’m drawn to components of liberation theology. Serving the God of the oppressed, the God of liberation, requires me to cry out on behalf of the marginalized.  I haven’t found my personal experience as a female in the military particularly oppressing – there have been moments, and people, but overall I haven’t. But certainly a number of women have. I became a chaplain to serve them and if I keep silent on such a fundamental thing as my existence as a woman, how can I inspire others?

Chaplains are consistently reminded that we are “visible reminders of the holy.” And I add in another qualifier for myself: 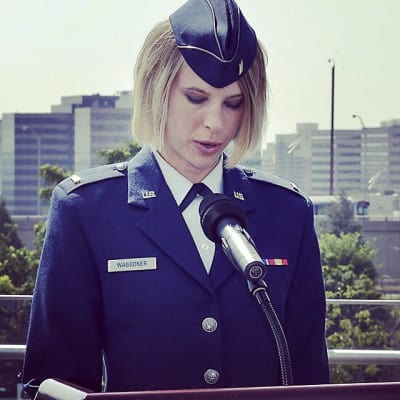 I am a visible reminder of the feminine holy.

Because the fact is, even in my brief few years as a military reservist, attention is continually drawn TO me, BECAUSE I am a woman; a woman in the military and a woman in ministry. There are things I’ve learned to consider because of these designations that put me squarely in the minority (again, nothing like the minority of being a female Army Ranger for example, but a minority none-the-less).

And yet I wonder about a Pauline theology of being “all things to all people.” The ethos of the military is community, brotherhood (<— intentional use of gendered language!), service, mission. Would I serve better if I did focus more on cohesion than on developing an identity as a female chaplain?

Of course, I will be a female chaplain no matter what I do. People will still single me out (for good and bad). I will still be a visible reminder of the feminine holy. I will always offer my perspective and hope it inspires people – my chaplain colleagues and the airmen I serve – to think in new and different ways.

I’ve written before about my ideal world: An existence where the designator “feminist” will become obsolete because equality of opportunity and position among the genders will be a guaranteed given. Will I serve people better if I operate as if this is already the reality (while still working to make it so as much as I can)? Or will I serve better to call attention to our deficiencies and challenge people to make it part of their reality?

The best answer I’ve come up with so far is contained in one word: Context. While it’s good to have a general framework in mind, no one theology of ministry can cover all the encounters I will face.

I might need to put on my feminist hat sometimes, or my liberation theologian hat, or simply my military officer hat. Perhaps this is a truer expression of “being all things to all people.”

Posted in Personal Stories, Women and the Church
Tagged as Alexis Waggoner // sexism and abuse in the church // women in church leadership // women in the military 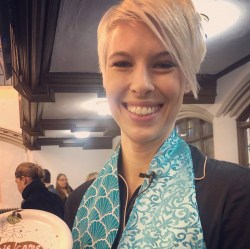 is a theologian and educator who is passionate about raising the bar for theological education. She graduated from Union Theological Seminary in 2014 with a Master of Divinity degree and is ordained with the Christian Church (Disciples of Christ). Alexis and her husband, Ryan, have been married for 16 years and have a 4-year-old daughter named Junia.