3 Reasons to Be a Feminist

From the editor: We’ve extended our series of personal stories of Christian women who identify in some way as feminists. We hope that hearing these stories will broaden our understanding and give us a fuller context in which to have conversations about equality in the Church.

My adventure of becoming a feminist was like one of those silly love stories you read where people say they were halfway there before they even knew they had begun.

My mum is a feminist, though she hardly ever uttered the actual word. It wasn’t until I found myself immersed in a non-Christian, higher education environment that I finally had the opportunity to learn what feminism was and is. I learned I had been a feminist for years without even knowing it.

Unfortunately feminism has garnered a poor reputation within our society. The Women Against Feminism movement makes me want to cry, because it seems as though people just don’t understand what feminism is. According to a Facebook poll (clearly the most reliable way to gather information), some people hear the word “feminist” and think:

• Lesbian (feminists can only love other feminists, who are all female because a male can’t be a feminist – therefore all feminists are lesbians)

• Anti-procreation (children are the devil incarnate and force women to adhere to gender stereotypes, didn’t you know?)

• Pro-choice (because every feminist thinks and believes exactly the same)

• Anti-God/religion (God is the religious depiction of patriarchal values)

• Sarcastic and opinionated (who me? Sarcastic? Opinionated? Never!)

Sometimes when I tell people I’m a feminist I can literally feel negative vibes emanating from their souls. Seriously, from the depths of their souls.

Feminists come in all shapes and sizes, backgrounds and stories, genders and cultures. What unites us is our belief in equality. That’s what feminism is about. Equality in thinking, acting, perceiving, and ability to make choices in life.

So, here are three reasons why I believe you should be a feminist:

1. Feminism seeks equality for everyone.

It’s a common misconception that all feminists think women are better than men, and seek to put women above men. Historically feminism has sought for equal rights for just women, but it has evolved over the years to seek equal rights for everyone. Because of its interdisciplinary nature, feminism envelopes not only gender disparities, but cultural, sociological, political, and economic disparities, seeking justice and equality for all marginalized populations.

What does that mean? It means that feminism fights for more than just women.

Feminism fights for men who shouldn’t have to worry about being teased if they choose to become a nurse or stay-at-home dad just like it fights for women who want to be doctors and CEOs as opposed to nurses and secretaries.

Feminism fights for the American Middle Eastern community to be treated like people as opposed to potential terrorists because of their family origin just like it does for girls around the world who are denied an education because of their gender.

Feminism fights for the downtrodden, abused, marginalized, and picked over. Feminism stares injustice in the face and decides to do something about it – not just for women, but for everyone.

2. Women must constantly ask themselves: Is this safe?

I get lost on Reddit sometimes. Not too long ago I came across a sub-reddit about “girly” things men wished they could do without being judged. The responses were hilarious, ranging from “wanting to order a girly drink” to “being the little spoon” to “carrying a purse.”

While entertaining, I couldn’t help but wonder: “What would I like to be able to do that men can do without being judged…?”

My first thought: Walk to my car alone in the dark without the fear that someone might try to kidnap and rape me.

That’s an extreme thought. However, isn’t it true? Wouldn’t we all like to feel safe while walking by ourselves? As women we have to constantly be aware of possible danger.

Situations of sexual assault are normalized and excused through blaming and objectifying the victim and saying “boys will be boys.”

We carry mace, rape whistles, our keys strategically placed between our fingers as a possible weapon, and our phones set to dial 911 with one touch. We constantly watch our drinks in public to make sure no one puts anything in them. We make sure someone knows where we are at all times “just in case.”

I just want to walk to my car alone at night without being afraid.

3. Jesus was a Feminist, and we’re supposed to be like Jesus, right?

Okay. So I don’t have a written letter signed by Jesus saying “I, Jesus Christ the Son of God, am a Feminist.” But, I do have his biblical example and teachings.

Jesus provides one of the greatest examples of feminist values within a culture that offered more exclusivity than inclusivity. Perhaps the best illustration of this is that of the Samaritan woman Jesus met at the well (John 4:4-26). As a teacher, he was expected to mingle with the Jewish male population; they were his equals within society. And yet we find Jesus seeking out a Samaritan woman. The Samaritan people were highly marginalized within Jewish society, women were highly marginalized within Jewish society; yet Jesus sought her out, conversed with her, counseled her, and sent her out as a voice for change.

When the Church tells women they can’t hold the same positions as men within a church setting, it’s not okay.

That is not how Jesus lived out his life. He treated men and women the same. The fact that women were present among the disciples of Jesus broke a long tradition of exclusion (see Luke 8:1-3). Jesus never disgraced, belittled, or stereotyped a woman based upon her gender. Rather, he removed society’s shackles and affirmed women as people throughout his ministry.

Jesus challenged the conventional patriarchy of his culture. He sought to include women, children, and marginalized populations as a part of his ministry and tutelage. He broke barriers. He stood up for those who had no one else speaking out for them. There is no greater example of the love and justice of God than Jesus, and there is no greater example of feminism than Jesus.

I am a Feminist; hear me roar. Will you roar with me? 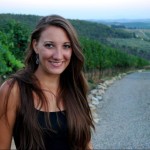 is Communications Manager with Micah Challenge USA (www.micahchallengeusa.org), and currently resides in Portland, Oregon. She loves to travel, sew, sing, explore the outdoors, take photos, and read. She hates peas and is a Twitter newbie.