Wives and Husbands in 1 Peter: Who is the Weaker Vessel? 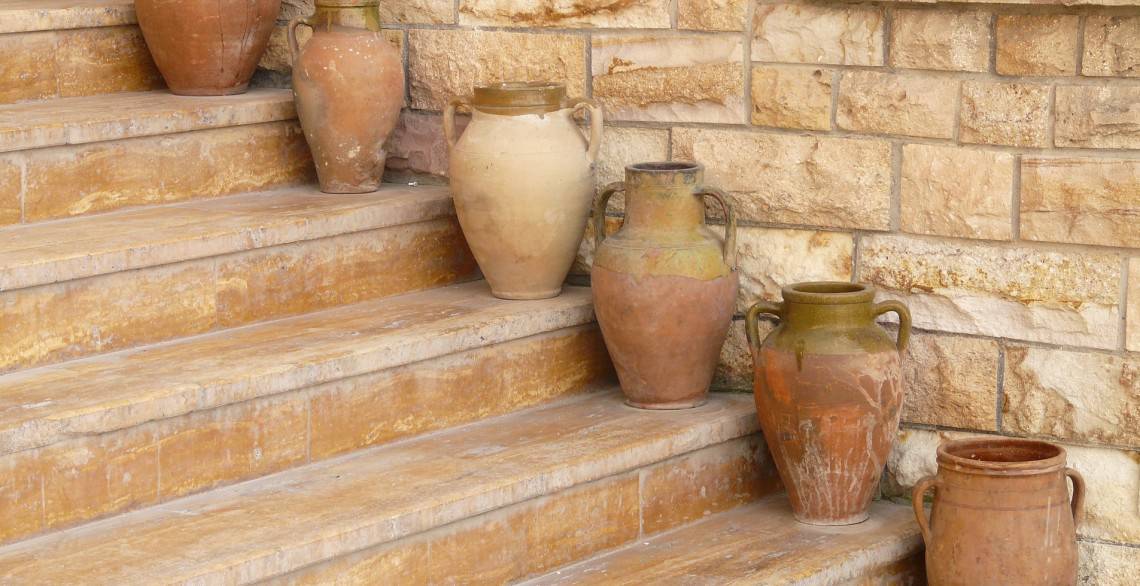 A Commentary on Living with Injustice

Certain passages in 1 Peter are sometimes used to support the idea of hierarchy in Christian marriage, but a closer look reveals that this letter is one of the strongest biblical commentaries on the injustice of such a model.

The letter-writer begins by extolling the great inheritance of those he is addressing. In a surprising twist typical of God’s upside-down kingdom, he reminds believers that they have an inheritance more valuable than gold that can never perish or fade, and encourages them to live holy lives according to their status as “a​ chosen race, a royal priesthood, a holy nation, God’s own people.”  1 Peter 2:9

The holy life the writer is calling them to is a life of suffering for the sake of Christ and the benefit of those who treat them unjustly. This is a primary theme of the letter.

As believers among Gentiles, they are encouraged to accept the authority of the man-made systems under which they are suffering in order to be a witness to Christ. These unjust systems include governmental authorities as well as harsh slave masters. The author exhorts,

“For it is commendable if someone bears up under the pain of unjust suffering because they are conscious of God.” 1 Peter 2:19

In the middle of the letter, situated in the context of enduring suffering from non-believers for the sake of Christ, is an exhortation to wives to accept the authority of their husbands.

“Wives, in the same way submit yourselves to your own husbands so that, if any of them do not believe the word, they may be won over without words by the behavior of their wives.” 1 Peter 3:1-2.

The clearly-stated purpose of accepting this authority is in order to win over a non-believing husband to Christ.

It’s important to note the phrase, “in the same way.” In the same way as what? This exhortation is the same as others throughout the letter: Though you are living in unjust, man-made institutions with non-believers, suffer in kindness so that you might be a witness for Christ.

Hierarchical marriage is not being presented as a normative ideal for Christians here; it is being compared to other unjust systems under which these believers live.

After the exhortation to wives, husbands are encouraged “in the same way” to honor their wives.

“Husbands, in the same way, be considerate as you live with your wives, and treat them with respect as the weaker partner and as heirs with you of the gracious gift of life, so that nothing will hinder your prayers.” 1 Peter 3:7

Note that while some translations say “weaker partner” or “weaker sex”, the Greek word used here is vessel (σκεύει). This verse has been used to support the notion that the Bible says women are physically weaker than men. Unfortunately, that concept has even been extended to imply that women are weaker in other ways as well – emotionally or mentally, for example – and so are in need of male strength and authority. [1]

While, undoubtedly, most women (not all) are physically weaker than most men (not all), I do not see any indication that the writer is implying that male hierarchy should be the model for Christian marriage because women are not as strong physically as men. In fact, if you take a moment to think about it, physical and material strength are not portrayed in scripture as an indication of spiritual strength or authority.

Peter is reminding them that in a marriage between a believer and a non-believer, the believer is the one in the strong position with all the spiritual resources, regardless of gender.

As was described in the beginning of the letter, the believer obtains an invaluable, imperishable inheritance through covenant with God through Christ.  So it is more fitting to the context of the letter to say that the writer is encouraging the believing husband to be kind to the unbelieving wife and to treat her with honor even though she is spiritually weak (the weaker vessel, so to speak).

The word translated as vessel is also used in 1 Thessalonians 4:4 and 2 Timothy 2:21 in the context of sanctification and holiness. If we apply “in the same way” to the other examples the writer is giving, we can identify the spiritual weaker vessel in each example the writer gives. The husband referred to in 1 Peter 3:1 is the weaker vessel, as is the unjust slave master in 2:18, because of their spiritual conditions.

Another aspect of 1 Peter used to support hierarchy in Christian marriage is the mention of Sarah and Abraham. [3] At first glance, it is easy to interpret this as encouragement for the wife to treat her husband as lord:

“D​o not adorn yourselves outwardly by braiding your hair, and by wearing gold ornaments or fine clothing; r​ather, let your adornment be the inner self with the lasting beauty of a gentle and quiet spirit, which is very precious in God’s sight.  I​t was in this way long ago that the holy women who hoped in God used to adorn themselves by accepting the authority of their husbands. T​hus Sarah obeyed Abraham and called him lord. You have become her daughters as long as you do what is good and never let fears alarm you.” 1 Peter 3:3-6

At first glance, it is easy to interpret this as encouragement for the wife to treat her husband as lord. Yet on closer examination, I’m not at all convinced that this is what the writer intends.

Such an interpretation conflicts with the writer’s exhortation in the same chapter to sanctify Christ as Lord:

“But even if you should suffer for the sake of righteousness, you are blessed. AND DO NOT FEAR THEIR INTIMIDATION, AND DO NOT BE TROUBLED, but sanctify Christ as Lord in your hearts.” 1 Peter 3:14-15

I think it’s more likely that the writer is encouraging the believing wife of a non-believing husband to reject the adornments associated with a husband’s culturally-given authority; and to do so in order to focus on her inner self (v.4) and on the acceptance of Christ’s authority in her life (v. 15).

By developing her spirit in God’s sight, might a believing wife accept God’s authority and call Christ Lord, giving her loyalty the strength the Lord provides us all through the New Covenant?

Would she thus become a daughter of Sarah who “never let fears alarm her” regardless of the injustice she may experience in a hierarchical marriage?

This is consistent with 1 Peter 3:14-15, which exhorts the exiles not to fear, but to sanctify Christ as Lord.

So I do not believe the exhortation to wives can be interpreted as a command to hold their husbands as lords in their hearts.  Rather,“in the same way” that all believers are being urged to submit to governmental authority, wives are being encouraged to suffer in an unjust institution (hierarchical marriage) for the sake of Christ.

It is also important to realize that while we say very flippantly today that “Christ is Lord”, this letter was probably written during the time of Nero, and so this declaration was a cause of persecution for those to whom the letter is addressed. To say “Christ is Lord” branded Christians as dangerous to society due to their refusal to recognize the Roman Emperor as God.

Their failure to “toe the line” was often seen as the source of plague, famine, disease, or other calamity for the entire society based. These believers are encouraged to submit to the Lordship of Christ in spite of the suffering that may ensue.

Believers’ Position to the Lord and One Another

There is no gender distinction when the writer refers to believers as living stones and a holy priesthood (1 Peter 2:9). This status is based on the covenant relationship to God that now exists because Christ is Lord of them all. I believe the writer is reminding the readers that their loyalty is to Jesus Christ, especially in light of injustice. [4]

For these men and women, these living stones, institutions like emperors, governments, slave masters, and hierarchical marriage no longer have authority in their lives. The authority now belongs only to Christ, whose authority brings freedom, not fear.

“A​s servants​ ​of God, live as free people, yet do not use your freedom as a pretext for evil. ​Honor everyone. Love the family of believers, fear God, honor the emperor.” 1 Peter 2:16-17

And all of you must clothe yourselves with humility in your dealings with one another… 1 Peter 5:5

It’s surprising to me that this passage is used to endorse hierarchical marriage roles when it is so clearly highlighting the injustice of such an approach. We see here, as we do throughout the New Testament, an encouragement to honor one another in the context of mutual loving relationship, enjoying the freedom that comes when we truly know Christ as Lord.

[1] For example, note Elliott’s commentary: “Unto the wife, as unto the weaker vessel.—Or rather, as we now take it, as with a weaker vessel, with what is female…The thing which the husband is specially to understand and take into account is that he is dealing with a thing less strong than himself…The weakness here ascribed to the female sex is primarily that of the body, as we shall see when we consider the word “vessel,” though it may, perhaps, indicate frailty in other respects as well.”

[2] As explained by Sandra Richer in The Epic of Eden, in this type of covenant between a suzerain and a vassal, “one party was clearly more powerful than the other and therefore had the right to demand submission on the part of his weaker ally. As a result, the partners referred to each other as…’lord and servant’” (73)

[3] In reading accounts of Sarah and Abraham, I think it is clear that she did not always obey him and her reference to him as Lord was a sarcastic one expressed during a moment of laughing unbelief in response to God’s word about their future child. There is probably much more to this passage than meets the eye.)

[4] “A vassal could only have one suzerain. In the Bible, the term for this type of loyalty is hesed. This term appears so often in the Old Testament that and array of terms are used to translate it – love, lovingkindness, mercy, faithfulness, etc.’ But the best translation of this term is simply ‘covenant faithfulness.’ “ (Richter 75) The readers are being compelled to serve the Lord by suffering well in order to give witness to Christ who faithfully suffered for our sake.

For further study, Marg Mowczko has an excellent commentary on the phrase “weaker vessel” here.

Posted in Biblical Equality, Women and Relationships, Women and the Bible, Women and the Church
Tagged as egalitarianism // gender roles // marriage and family // sexism and gender equality in the church // weaker vessel in the bible

is an ordained minister and Masters of Divinity student at Asbury Theological Seminary. Her ministry includes healing prayer, spiritual direction, pastoral care, and mentoring for those seeking to develop their gifts and callings. Click on Heather’s name to visit her website and blog, Let Them Have Dominion.