Taking the Backseat of Christianity

I was a freshman in college and I believed I had to take the backseat of Christianity.

We were headed to Columbia, Missouri to do homeless ministry. People were piling into cars, and it came down to who would get to “ride shotgun” in the front seat. Without a fight, I told one of my peers: “I will take the back seat; I am going to have to get used to this submission thing anyway.” Defeated, I quietly slid into the back seat.

Growing up I was always the group leader; the one to take charge and make team decisions. I naturally took the leadership position in whatever setting. In high school, I recognized society’s disposition against me, and I recognized the value of feminism. I got behind it and participated in my high school’s feminist movement.

But then, I became a Christian.

I can remember the first time I realized that people in the church thought of me as lesser because of my gender. I was told no when I wanted to help serve communion. I was shocked when I was told why I couldn’t. I had been baptized, I had baptized someone else. I had been on a mission trip, led small groups, and invited all my friends to church. Why couldn’t I serve communion? Because of my gender.

At first, I was angry, but then I accepted it. I sat and listened to all the reasons why women can’t hold leadership positions. I didn’t understand why Paul had so much animosity towards me, but since he wrote those things in the Bible, I bought it. I just wanted to honor the Word of God. I sincerely desired to glorify God with everything I was. I was told that to glorify God, it would be best for me to take the backseat.

I figured I could still serve God from the backseat, and I had the burning desire to do missions, so I went to Bible College. With each semester that passed, more and more of the strong leader inside me died off.  I was told more and more that I needed to take the backseat. I changed my major from Cross-Cultural Ministry to Christian Education, because at the end of the day, all I could do was teach small children.

I wasn’t going to be able to preach like I longed for.

I wasn’t going to be able to lead like I longed for.

I wasn’t going to be able to be an elder like I longed for.

I wasn’t going to be able to reach the lost like I longed for.

Then I encountered Junia and I realized I didn’t have to be in that box they had put me in – that I had put myself in.  I can remember it like it was yesterday, I was sitting on the couch in one of my professors’ homes, Dr. Paul Axton.  We were gathered around the word of God studying Romans. It was our last week of the study and he was teaching the sixteenth chapter. He had different people with different translations read Romans 16:7. I didn’t get it. I didn’t understand why he was making us do that.

But then, he explained how Junia became Junias.

From that day forward I never doubted who God created me to be.

I never doubted that God had given me an ability to lead for a reason.

I never doubted that I could fully participate in the Gospel.

If God endorsed the ministry of Junia, and if Paul praised her for it, I could do the same.

From that day forward I realized that I don’t have to take the backseat. I can sit at the feet of Jesus, and learn more and more about the non-discriminatory love Jesus has for all people. And you can, too. 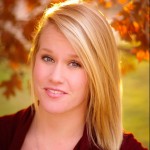 Sharon lives in a small midwestern town, Moberly, with her husband Jake. They are currently sharing the responsibility of preaching at a Disciples of Christ church in Salisbury, Missouri. Sharon is passionate about her kitten Phoebe, the equality of women and minorities in the church, friends and family, theology and philosophy, coffee, Deaf culture, holistic wellness, and The Office. She is in the process of learning and discovering where life will take her.