It was an American supermodel who first showed me an egalitarian view of the Bible.

Kathy Ireland shared with me in an interview about her first modeling trip overseas when she was 18, when her loneliness led her to read the Bible her mom had slipped into her suitcase, and how Jesus’ love, honor, and care for women led her to God.

When we spoke in 2005, Ireland was in her second career as a businesswoman, and I was in my first career as the features editor for a small furniture magazine. She was one of my first celebrity interviews as a young journalist, so I fastidiously researched her to prepare, and I found an old interview in which she had mentioned being a Sunday school teacher. I liked that detail about her—I had also been a Sunday school teacher. After we talked about top-of-the-bed, merchandising products for busy moms, and personal branding, I asked about her faith. She told me how Jesus’ words and actions to women made her feel valued as a person, while she worked in an industry that valued her face and her body.

This glimpse she gave me of a Jesus who equally calls women was, sadly, overpowered by the relentless message from my complementarian church and social group, that as a newlywed I should be home full time and having children.

I came to believe that filling those roles was the best way I could be a Godly woman—which I truly wanted to do—so I got pregnant, quit my job, and stayed home. I tried to embrace homemaking and parenting, using my spiritual gifts of hospitality and encouragement, while trying to let go of my other gifts: leading, teaching, and pastoring. To my shame and regret, I channeled those gifts into pulling other women into the “Biblical womanhood” box with me.

After my second child was born, I broke down as a result of postpartum depression, ignored grief, and a mold I tried to fit that didn’t fit me. I lost many of my talents and all of my joy. My long recovery process with therapists, anti-depressants, self-examination, and spiritual growth got me started on re-examining the fundamentalist faith I had grown up with, including the religious limits it had put on me as a woman.

While I continued to hold a complementarian view, I started to see more freedom and opportunities for serving God and people. I enjoyed parenting more as I got healthier and pursued additional passions that employed all my gifts. I grew into my second career, a hybrid of involved mom and part-time communications professional. This fit me much better…until I tried to use those skills in a new church.

In the world of businesses and non-profits, I was told, “You communicate so clearly. Thank you for helping us improve things. We’re glad you were part of this meeting. You added a lot of value.” In the church, I was chastised for my emails (“too businesslike” for the church) and was called “critical” when I offered suggestions in my areas of expertise.

I realized that it wasn’t my actions alone that were being resisted, it was my actions in combination with my sex. I felt confused about how to serve when the talents I had worked so hard to discover and develop weren’t wanted because they weren’t “feminine” enough—I was still not fitting the Godly woman mold.

One day, I was deliberately not-invited to a meeting regarding ministry responsibilities I shared with my husband. When I asked why, I was told that my husband could handle the situation better as “priest of the home.” That phrase galled me. I was pretty sure it wasn’t even in the Bible. I double-checked to make sure, and that launched me into a three-year investigation of egalitarian theology.

I decided to read Rachel Held Evans’ book A Year of Biblical Womanhood. I sat on the side of my bed in the summer sunshine as I read the chapter on Proverbs 31 and cried over my Kindle app. I cried because I felt God’s love in a way I hadn’t in ages. God really loved me, a woman. I was not less-than because of my female-ness. I learned that Proverbs 31 is a heroic-poem celebration of women of valor, not a To Do list. It was honoring women, not putting more burdens on them.

Then I read Carolyn Custis James’ Half the Church. I cried when I read about all the injustice toward women around the world. James told me that as an equal image-bearer of God, I am not only wanted but necessary in God’s design to use the Blessed Alliance between men and women to bring about God’s justice. I learned that my professional skills could be a help in the Kingdom of God, not a liability.

I read Sarah Bessey’s Jesus Feminist and her other writings. We went to the same university, so I could picture her surroundings when I read her story of bright-eyed enthusiasm to change the world dulled by cynicism toward the church. Her journey gave me hope that rediscovering love for the church, and finding a place for myself in the church, was possible.

I read Scot McKnight’s The Blue Parakeet and started learning how to read the Bible well, understanding the words in their original contexts before trying to apply them to my own. I learned that the books of the New Testament are profoundly countercultural as they defy patriarchy and elevate the status of women in the new community of God’s people.

Then I dove back into the Bible itself, devouring the Gospel accounts over and over and over. In those pages, I discovered Kathy Ireland’s Jesus, the one who debated theology with his dear friend Martha. I re-read the epistles, where I found Sarah Bessey’s Brother Paul, who praised and thanked his many female colleagues, women who were church leaders in a patriarchal world.

All this study has made me a convinced egalitarian.

It has brought me to seminary, on a path to becoming an ordained pastor. I’m learning with Dr. McKnight and other professors at Northern Seminary who affirm the full gifting and equality of women. A few months ago, I was online participating in a Greek tutoring session, and my youngest daughter, Iunia—the Latin spelling of the female apostle’s name—toddled into my room. I tried to hush her babbling, but Scot declared, “Let her talk! Junia has been silenced long enough.”

I am thrilled that Iunia, her sisters, and her brother will grow up without sex-based limits on their opportunities to love God and their neighbors.

Now I serve on staff at an international church, where my gifts are welcomed. I get to preach and teach this beautiful Bible and this message of freedom and unity in the Kingdom of God. How do women in radically different cultures become Godly women? In Christ alone. I need to become like Jesus, and they need to become like Jesus, and we all need to be shaped into Christlikeness, because we were made to be God’s image-bearers, male and female.

A Godly woman can be a supermodel, a businesswoman, and even an apostle. I am a Godly woman because I am trying to be like Jesus, who welcomes me as His disciple. 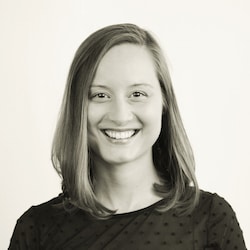 Becky is the Discipleship Director at an international church in Europe. She writes about mental and emotional health at medium.com/wholehearted and guest posts about abuse at Jesus Creed. She conveys her five kids around town on bikes and studies New Testament in the middle of the night via Northern Live. You can find her on Instagram at bcastlemiller.