Response to a Complementarian View of Women 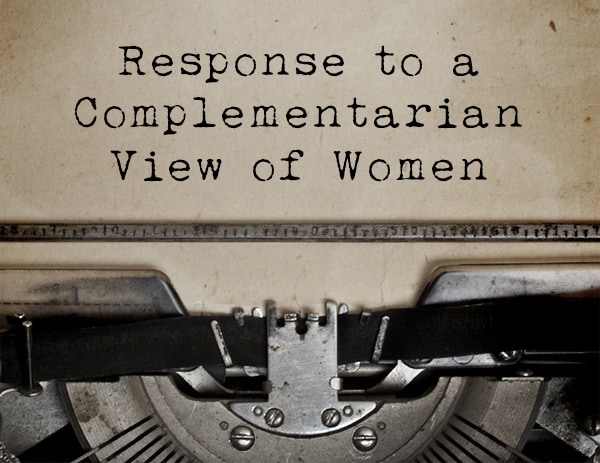 Every few weeks we get a comment protesting that the claims we make about the complementarian view are not what most complementarians believe, even though most of the points we choose to refute are espoused publicly by prominent leaders of the movement. This has led us to think that perhaps many complementarians don’t know what the movement they are aligning with actually teaches. Today Bob addresses this by responding to statements made by the most senior leader in the movement.

I recently read a blog article written by Owen Strachan, the Executive Director of the Council on Biblical Manhood and Womanhood.[1]  I was so astounded by what I read that I decided to respond.  Here are some direct quotations from the article, along with my thoughts.

Strachan: “Men and women are different. To some readers, this is obvious. To an increasing number of people, however, these are fighting words.”

Response: Actually, I’ve never met anyone who disagrees that men and women are different.  It is the assumption that women must be subject to male authority that people find offensive.  They find it offensive not because they believe men and women are the same, but rather because the insistence on female “submission” to men is sexist.

Strachan: “Yet God made the man first, and he gives Adam a leadership role by asking him to exercise authority over the animals by naming them.”

Response: Assuming that the order of creation has anything to do with authority is exactly that, an assumption.  The Genesis account never explicitly equates order of creation with rank.  The apostle Paul addresses this in his first letter to the church in Corinth: “In the Lord, however, woman is not independent of man, nor is man independent of woman.  For as woman came from man, so also man is born of woman.  But everything comes from God” (1 Corinthians 11:11-12, NIV).

Regarding authority over the animals, in Genesis 1:26-28, it is clear that God gave all of humanity—male and female–authority over the animals.  Assuming that the man alone had this authority is not only an assumption, it is a contradiction of the biblical text. As for naming the animals, according to the text in Genesis, this took place before Eve was taken from Adam’s side.  To assume that one sex was given naming authority and that the other was not neglects the reality that all of humanity was bound up in one person at this point in the creation narrative (cf. Genesis 2:19-21).

Strachan: “Everything falls apart in the fall. Adam fails to lead and protect Eve. Eve is deceived by the serpent and assumes the role of leader (Gen 3:1-13). In short, the fall itself involves an inversion of God’s plans for men and women.”

Response: Nowhere does the Genesis account say that Eve assuming the role of leader caused the downfall of humanity.  Nor does it say that Adam abdicated his alleged authority.  These are simply more assumptions that are not supported by the biblical text.

The Bible does not make any statements whatsoever about gender roles in these verses.  The cause of humanity’s fall into a sinful state was disobedience to God’s command. In his letter to the Romans, the apostle Paul states this explicitly: Adam sinned by “breaking a command” (Romans 5:14, NIV).  There is absolutely no mention of an alleged failure to protect his wife, or an abdication of “male authority.”

In fact, such views on these passages can be found not in the Bible, but rather in commentaries from St. Augustine and John Calvin. Calvin, by his own admission, derived his theology from the writings of Augustine.[2]  Augustine, for his part, admitted making sense of the Bible through the eyes of Plato’s dualistic philosophy; this especially seems true with regard to Plato’s views on the “flesh” and “spirit.”[3]  Here is a sample of Augustine’s Platonic thinking:

When she was made of his rib, Adam said, “This is now bone of my bone, and flesh of my flesh….” Flesh, then, is put for woman, in the same manner that spirit is sometimes put for husband.  Wherefore? Because the one rules, the other is ruled; the one ought to command, the other to serve. For where the flesh commands and the spirit serves, the house is turned the wrong way. What can be worse than a house where the woman has the mastery over the man? But that house is rightly ordered where the man commands and the woman obeys. In like manner that man is rightly ordered where the spirit commands and the flesh serves.” (On John, Tractate 2, § 14)[4]

Not only are these assumptions erroneous, they are rooted in a culture of sexism.  I say this because St. Augustine was not only influenced by Plato’s dualism, he also had a very Roman understanding of relationships, particularly those that existed between men and women, masters and slaves:

It is the natural order among people that women serve their husbands…because the justice of this lies in (the principle that) the lesser serves the greater . . . This is the natural justice that the weaker brain serve the stronger. This therefore is the evident justice in the relationships between slaves and their masters, that they who excel in reason, excel in power (Questions on the Heptateuch, Book I, § 153).[5]

Augustine believed that men should rule women—and that masters should rule slaves—because it is “the natural order” that the “weaker brain serve the stronger.”  When anyone reads the Bible through the lens of St. Augustine’s theology, they are reading it through the eyes of 4th century Roman sexism.

Strachan: “To be a woman is to support, to nurture, and to strengthen men in order that they would flourish and fulfill their God-given role as leaders.”

Response: This statement literally defines “being a woman” solely in terms of supporting male leadership.  Perhaps some reflection on the meaning of the term androcentric would be helpful.  In any case, a woman has her own identity, in her own right, apart from any relationship she may or not have with a man.

When the apostle Paul wrote his letter to the Romans, he told them, “Do not conform any longer to the pattern of this world, but be transformed by the renewing of your mind” (Romans 12:2, NIV).  With regard to its view of women, the complementarian perspective has dramatically failed to heed this command.