Really? You Listened to a Woman? 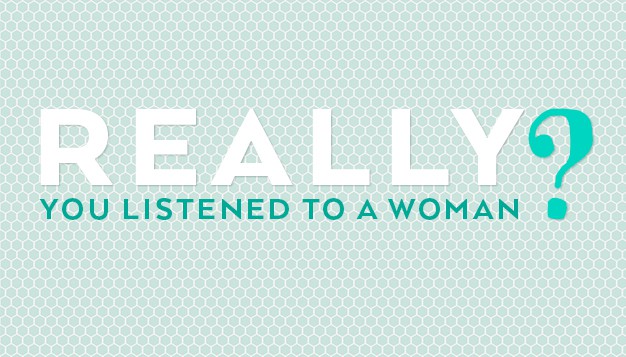 When my friend Melissa asked the discussion question, I wanted to shrink into the floor.

“What do you need to confess?” she said.

There was a long silence while we all considered our answer.

We were at IF:Gathering, or more specifically, at one of its 40,000 off-site streaming locations. Our conference center was Melissa’s living room, which sat eight women from around San Diego’s North County. IF: impressed me. The speaker list was a rundown of powerful women in the church. They spoke with grace and candor about our callings and about the love of Jesus. I drank in the power of a global sisterhood. That sense of belonging was why the question was so unwelcome.

Often, when I’m surprised by my sin, my first reaction is sullenness. That day, I folded my legs up to my chest as my sisters in Christ confessed. I looked down at the upholstery. I picked at my cuticles. I was over the question.

I am just fine, I thought. I don’t need to confess anything. The ridiculousness of that idea settled in my chest. That’s when Jesus opened up his hands and showed me my sin. And it had to do with the very venue that was asking me to repent.

I realized I was harboring a deep mistrust of men.

Women are my safe space.

I run a blog targeted at them.

I interview them once a month.

They’re the primary audience of all publications I write for.

When I read fiction, it’s generally written by women; my favorite non-fiction books of last year, especially Christian ones, were too.

And when I heard about an all-women conference with a line-up of female speakers, I thought count me in.

All that is great. It’s not surprising that the issues I identify with most are related to my femininity.

But there on the pillow, my arms wrapped around my knees, I realized there was more to it than that.

As in: I recommended a book to a friend of mine, and he was surprised to find out that it was written by a guy. “You just don’t seem like you read very many books by men,” he said.

I wanted to get angry with him. But I realized he was right. And it wasn’t just about choosing women. It was about avoiding men.

Last year, during a feminist synchroblog, I felt incredulous when one of the organizers, Preston Yancey, explained that his feminism was inspired by Sarah Bessey, the author of Jesus Feminist.

Really? I thought. You listened to a woman?

The sexism in my head surprised me. Here was a man who self-identified very publically as a feminist, and I was surprised that a woman’s wisdom had reached him? I was surprised that men could learn from women? I realized I was uncomfortable with the idea of him helping run the synchroblog at all, even though men and women partnering as equals is something I supposedly long for.

Deep down, I didn’t think men could care about feminism. I didn’t believe that men needed to care. In fact, I preferred to keep them out of the conversation altogether.

Well, even though I haven’t experienced it first-hand, I’ve seen men wreak sexual and physical abuse on people dear to me throughout my life. I’ve seen victims get blamed over and over, and abusers never answer for their violence.

I have just a teensy-tiny trust problem.

Let me be clear: I think it’s smart to have boundaries. There’s a wisdom and carefulness that witnessing abuse has given me.

But there are problems with assuming men can’t be interested in feminism, that they won’t challenge their unhealthy thoughts, or advocate against abuse.

It means I think men can’t learn anything from me.

It means I don’t have to challenge them about it.

And most importantly, it’s not loving.

Since that afternoon, I’ve been thinking about God calling Jonah to Nineveh.  I can understand why he ran away. I love many men in my life—my husband, my father, my friends and extended family. But even with these trusted men, it’s hard for me to speak up. And speaking up in public venues that aren’t specifically for women, or to men that I don’t have long histories with?

I’d rather go to Tarshish.

Truthfully, I wish I could just write men off and not challenge the power structures that hurt all of us. But I’m seeing there’s nowhere to run. That not speaking is hurting me too. That the call to love is serious. That to love men as my brothers is empowering.

I need to stop thinking feminism is a “women’s” issue. I need to start raising my voice in love to preach to my brothers—whether or not they are ready to hear me. And I need to take seriously Jesus’ call to love everyone, with all of my heart.

YOUR TURN: Heather shared her awareness of something we don’t often talk about; coming to terms with our own brand of sexism. How do we overcome our tendencies to build up prejudices towards those of the opposite sex?

Be sure to check out Heather’s blog heathercaliri.com and get a copy of her free e-book, Dancing Back to Jesus: Post-perfectionist faith in five easy verbs.