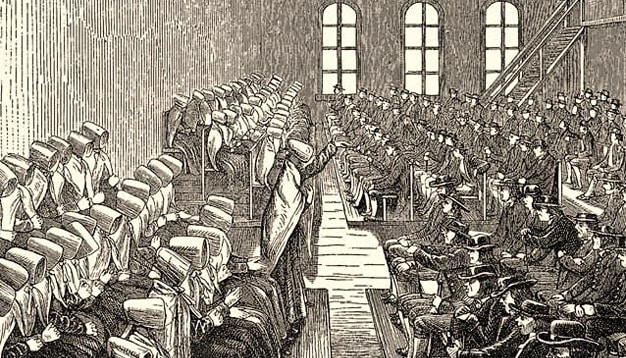 The 52 Ancestors in 52 Weeks campaign encouraged bloggers to devote one post a week to writing about their ancestors.  Charity Johnson, an amateur genealogist and the direct descendant of several long lines of Quaker women in America, accepted the challenge and made an interesting discovery in the process – she is not the first woman to preach in her family!

The most prominent of my ancestors was a cousin, Elias Hicks (1748-1930), who brought Quakerism to a famous schism in North America. Though he overshadows my female ancestors in history, I recently discovered that the women preceding him were outstanding in their own way. Take for example, one of his great-grandmothers and my 7th great grandmother, Phebe Willets.

I don’t know how to put it less bluntly – I almost missed Phebe because I made the mistake of focusing on the male names in the family, even though between Phebe and myself, there are only two males in 7 generations:

Phebe Willets was born in 1699 and died in 1782 in her 83rd year, having lived through the transition from Dutch to English control of New York, the French & Indian War, and most of the Revolutionary War. She married Adam Mott in her 30s, but he died when their youngest child was a toddler. Phebe later remarried Tristam Dodge, who also predeceased her.

Long Island Quakers began meeting about 25 years before Penn’s settlement in Pennsylvania. By the late 1600s when Phebe was born, there were more Friends Meetings (the Quaker equivalent of churches) in Queens County of New York than Presbyterian, Dutch Reformed, or Anglican churches.

It’s an old truism that Quakers exerted an influence that was disproportionate to their numbers, and their influence lasted into the early 1800s. It’s hard to say for certain why this was, but I attribute it to their firm belief in the equality of all people. They effectively doubled their active congregations by giving free rein to the women. Their ideals and behaviors were rooted ultimately in their belief that we are equal in God’s sight, and that is how we should treat one another. (Another reason they were active participants in the Underground Railroad).

From my own experiences as the daughter of a practicing Quaker and from what I have read, I believe their values and acts lent American women the strength to organize and to persevere for women’s suffrage.  Did you know that ALL of the main organizers at the First Woman’s Rights Convention in Seneca Falls, NY (1848) were Quakers or former Quakers—except for one?

Organizers Lucretia Mott, Mary Ann M’Clintock, Jane Hunt were Quakers. Another organizer Martha Coffin Wright, had been raised a Quaker but disowned for marrying “out of unity” (marrying a nonQuaker). The non-Quaker organizer was Elizabeth Cady Stanton. As an aside, Cady Stanton had been kindly marked by Christianity-when her father’s zeal for furthering her education waned, a local Presbyterian minister Rev Simon Hosack mentored her, encouraging her to keep on with her studies.

Since the beginning of Quakerism, starting with Margaret Fell (Fox) of England who wrote the treatise, “Women’s Speaking Justified: a Scripture-Based Argument for Women’s Ministry” (1664), Quaker women were preachers. I guess that set the pace–they made the decision early on and never went back on it.

“They practiced greater equality for women centuries before most other religious groups–women Quaker ministers and missionaries came to Long Island, and women ministers from Long Island traveled to preach and exhort.” (Naylor, 2013).

Think about it. Quakers recognized female preachers at a time when women did not own property, vote, or even speak in public meetings.

And they especially DID NOT PREACH.

Quakers recognized many “official preachers.” While any Quaker could speak in a meeting if moved by the Spirit, records were kept of members who were recognized as especially gifted preachers. These records served, in effect, as an authorization for the speaker to preach at meetings outside their own. Faulkner (2013) notes that many women preachers were documented in Meeting records, most of whom found their call to preaching while still in their 20s.

Phebe Willets was one of those recognized by her Long Island meeting as a gifted preacher. She not only preached, she traveled and preached, suggesting that she was in some kind of demand by others. Phebe expanded her field of influence when she traveled with Susanna Morris and Mary Weston to meetings in England (1752-1753) as companion minister.

But before you assume she was speaking about gender equality, think again. Preachers were recognized for having a special gift which was rooted in faith, not in the outcomes of the faith. Gender equality was an outcome of their faith. As Brekus (1998) notes, “Their vindication of women’s right to preach was always secondary to their faith in biblical revelation. They were biblical rather than secular feminists and based their claims of female equality on the grounds of scriptural revelation.”

Quaker Women Weren’t the Only Ones Preaching

After the early 1800s, the Quakers’ numbers dwindled for a variety of reasons. But the good news is that Quakers were not the only ones with female preachers: other women were traveling and preaching.

As Brekus (1998) and others have pointed out, many Christian denominations gave free rein to female preachers in this period, including the Shakers, Methodists, African Methodists, Freewill Baptists, and a coalition of “Christians” known as the “Christian Connection”. (Historically, this is the dawn of the Holiness movement and prior to the Pentecostal movement.)

Phebe Willets appears over and over in the histories of the 1700s, so I’m glad I followed this line. It seems she was one of those women ministers Brekus describes as “too conservative in their theology for women’s rights activists but too radical to be remembered by evangelicals.”

After making this remarkable discovery, you can bet that I’ll be looking more closely at my female genealogical lines from now on!

YOUR TURN: How does reading about women like Phebe impact your understanding of women’s roles in the church? Have you discovered any stories of women of faith in your own family tree?

Larson, Rebecca. 1999. Daughters of Light: Quaker Women Preaching and Prophesying in the Colonies and Abroad, 1700-1775. University of North Carolina Press.

Naylor, Natalie. 2012. Women in Long Island’s Past: A History of Eminent Ladies and Everyday Lives. The History Press.

Miller, Bonnie. 2008. Restoration Women Who Responded to the Spirit before 1900. Leaven 16(1). Available at: http://digitalcommons.pepperdine.edu/leaven/vol16/iss1/5