Paul, Singleness, and Mutuality: 3 Proposals for the Church

Something I’ve come to understand is that singleness is a high price to ask of people.

I was single for a long time before my girlfriend said yes to my awkward proposal (thankfully), and so I have some realization of what it means to be single in a sub-culture within a larger and highly sexualized American culture. To constantly be fed a steady stream of images and products designed to inflame and provoke and yet maintain sexual celibacy is not easy.

When Christian culture prioritizes marriage over singleness, we make things even more difficult by unwittingly illustrating that our single brothers and sisters are unwanted, or worse, unneeded.

So how can the church integrate and empower our single brothers and sisters? I offer three suggestions, though many more could and probably should be added.

1. Recognize the implied status of married men in the church

My wife tell me that on her seminary campus she often sees masculine language on ads for pastors and other church jobs. Almost exclusively, these churches wanted married men—not single. I will be seeking ordination upon graduation (probably alongside my wife, and I know that I am much more likely to be hired if I am married.

Being a married man in evangelicalism is like having special access to all the perks our subculture has to offer. For example, it includes an implied status that exudes responsibility and maturity. I know several men who have gotten married specifically to increase their chances of being ordained by a particular denomination known for wanting stability in candidates. What better way to illustrate this than by showing you are married?

I’ve heard male friends say that being married automatically makes you more mature, with one even intimating that unmarried men were lazy. Having known many married men, I can tell you that immaturity is not imputed on you when you “put a ring on it”. Plus, if I am allowed a moment of cynicism, hiring a married dude often means that a church gets an additional (unpaid?) worker in the wife.

We need to recognize the privileged status we confer upon married men, especially in our churches.

2. Understand that the unity of the church demands a place for single men and women

To paraphrase one of my New Testament professors at Fuller Theological Seminary, “disunity in the church was what most frosted Paul.”

The church is—ideally—a place where there is no division between its members. The famous texts written by St. Paul in Galatians 3:28, 1 Corinthians 12:11, and Colossians 3:11 abolish division in the church, with clear implications for the daily lives of Christians in any time period. One body, many members. We miss out on what it means to be “in Christ” in the church when we place divisions where Paul tore them down.

To be “in Christ” is to be a new creation (2 Corinthians 5:17; Galatians 6:15) and a new person (Ephesians 4:24). We are to put on the new self (καινὸν ἄνθρωπον: more literally, “new person”). This “new person” is indeed “members of one another” (ἀλλήλων μέλη). Though the cases differ, this is the pronoun found in 5:21 where mutual submission is enjoined to all believers).

To put it simply, the church desperately needs single women and men. There are times that I cannot speak to a single person as effectively as I speak to someone who is married man or woman. The social dynamic is different, and the experiences of both are often divergent. Our oneness in Christ Jesus does not remove the distinctions of gender or singleness, but it recontextualizes them within the social setting of mutuality.

Paul wishes that “all people” (πάντας ἀνθρώπους) were like him: single. Yet, he does not denigrate marriage, but rather believes that single men and women likewise have a deep calling to Christ. Paul’s reference to the deacon (διάκονον: masculine form, not “deaconess”) Phoebe in Romans 16:1-2 reveals a unique facet of this: the text does not mention anything about Phoebe being married at all. The letter to the Romans, likely carried by Phoebe to the Roman church, reveals a place in the church for those who are single to fulfill this same calling. Indeed, the marital status of most of the women and men who assisted in Paul’s extensive missionary activities (Rom. 16; Phil. 4:2-3) is rarely mentioned. (Read more on this here.)

Churches must hire single men and women to serve in any capacity they are called to, regardless of their marital status. The example set by St. Paul, who often tells the church to imitate him (2 Thess. 3:8-10; 1 Cor. 4:16; 11:1), should push us towards an acceptance of singleness as a valid option for ordination and ministry. Paul’s consistent use of family language throughout his epistles also demonstrates his belief in the necessity of viewing the body as a family. For example, he calls Apphia a (or “the”) “sister” (τῇ ἀδελφῇ) in Philemon 1:2; and he calls all Christians “brothers and sisters” (ἀδελφοὶ).

To avoid hiring single men and women in a church means that the church is missing out on the gifts and callings of others in the family. Churches must be intentional in the process of selecting paid and volunteer staff. This means specifying in job descriptions that marital status or gender is not an obstacle or requirement for said job. It means using gender inclusive language, or even specifically seeking out a single person for some ministry positions.

The church must exercise solidarity with our single brothers and sisters. We ask so much of them, and it is unfortunate that we are often not willing to sacrifice with them and for them. To profess singleness for others means being willing to carry your cross alongside them and sharing in their fears and burdens and sadness, in order that we would all be transformed as a unified and beautiful body to Christ’s glory.

Singleness is difficult in our modern day and age. This is not to disparage marriage, for marriage too is difficult. But for Paul singleness was seen as a “gift from God” (χάρισμα ἐκ Θεοῦ, 1 Cor.7:7), and it would surely have further frosted Paul that we would divorce singleness from community. Rather, may we strive to model mutuality as married and single believers.

There is no longer single or married; for we are all one in Christ Jesus.

Dancing with Deborah: My Exodus from Patriarchy

100 Best Christian Books – Where are the Women Authors? 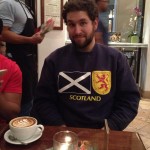 is a graduate of Biola University and a student at Fuller Theological Seminary. While much of his background is in film and screenwriting, Nick is looking forward to studying the relationship between systematic theology and New Testament exegesis. Nick is married to Allison (also a Fuller student), and enjoys playing with his blind cat Monty and drinking coffee (cream, no sugar). Click on Nick's name to read his blog, Split Frame of Reference.