Malestrom: Manhood Swept Into The Currents Of A Changing World (Review & Giveaway)

GIVEAWAY ANNOUNCEMENT: Next Friday we’re giving away a copy of the book Malestrom to a randomly selected blog subscriber! Subscribe by entering your email in the column to the right of this post.

In Malestrom: Manhood Swept Into The Currents Of A Changing World, Carolyn Custis James demonstrates why she is one of the most compelling theologians of the twenty-first century.

With the authority and unction of a true prophet, she not only identifies one of the major issues of our day—a fallen idea of maleness—but offers biblically grounded insight for how this curse can be undone. James explains her astute word-play-title and the premise of the book:

The malestrom is the particular ways in which the fall impacts the male of the human species—causing a man to lose himself, his identity and purpose as a man, and above all else to lose sight of God’s original vision for his sons.

We don’t have to look far to find evidence of this malestrom.

From sex trafficking, to the unconscionable beheadings by ISIS, to sacrificing the environment for the god of capitalism, to the repeated abuses of power in the bedroom and boardroom, men (and women) have fallen short of God’s command for us to faithfully image him and benevolently rule together in sacred partnerships. 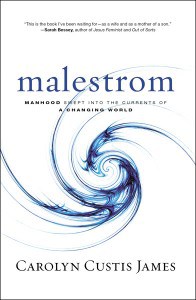 Arguably, part of the confusion about manhood emerges from the reality that it is both a “moving target” and a “cultural construct.” She writes:

The definition of manhood is not universal but varies widely from culture to culture.  . . Anthropologists describe a continuum of manhood that ranges from machismo. . . at one extreme to cultures completely unconcerned about masculinity issues at the other. . .  Evangelical definitions of manhood—all claiming to be built on what the Bible says—are scattered all over that continuum.

Yet in the midst of that maelstrom, “the issues that drive the quest for manhood are universal—identity, meaning, and purpose.”

How is it possible that we have strayed so far from God’s original plan?

Perhaps we need to look no further than human fallenness combined with the faulty assumption that patriarchy was God’s original intent.

an inferior social system that provides the cultural backdrop of the Bible; it emphasizes males in roles of leadership, moral authority, and social privilege. . . . Worst of all, patriarchy turns a man’s focus on himself—on his abilities and authority over others. His manhood is sustained by the submission and obedience of others. Patriarchy fails to reinforce God as the center or to call a man selflessly to invest his powers and privileges to promote the flourishing and fruitful living of others.

And then she adds, “It was never God’s ideal.”

Many Christians have reflexively assumed that because patriarchy was the frame used by God to tell his story, it must be part of the core message of the Bible.

Not so, insists James. “Beginning with Abraham, God chose patriarchs living in a patriarchal culture to launch his rescue effort for the world. Events in the Bible play out within a patriarchal context. But patriarchy is not the Bible’s message.”

Patriarchy is not the Bible’s message because it’s predicated upon the select few hoarding their power and simultaneously forcing everyone else to submit to them. This fallen system thwarts women from flourishing and actually wounds more men than it benefits. According to James, “Many men spend their entire lives hopelessly trapped at the bottom [of the pyramid]—trapped and exploited by other men or by disadvantaging circumstances of birth.”

Is there Scriptural evidence to understand patriarchy as anything other than prescriptive?

Thankfully, yes. James skillfully peels back the stories of Abraham, Judah, Boaz, Matthew, and Joseph (Mary’s husband), to reveal that when men say yes to God’s holy invitation, they prove that “illusions of superiority and inferiority have no place in the kingdom of God.”

Throughout Malestrom, James refocuses readers’ attention to one of the most consequential issues of the church. “The question is not whether the Bible contains patriarchy, but does the Bible affirm and require patriarchy for followers of Jesus?” While doing so, she does not shame or malign men but point them to the only real solution: “Jesus is the prototype of what it means to be human as well as what it means to be male. He is our anthropological North Star.”

James believes, and I whole heartedly agree, that when men fix their inner compass on Christ, the miraculous happens in our midst.

Relationships will be healed, men and women will once again fulfill their calling to partner in sacred alliances, the poor will be lifted up all because “Jesus’ gospel liberates men from the strictures of patriarchy and the power of the malestrom. It restores them to their true calling as God’s sons. And when the gospel gets hold of a man, the world will know that Jesus has come and his kingdom is not of this world.”

GIVEAWAY ANNOUNCEMENT: Next Friday we’re giving away a copy of Malestrom to a randomly selected subscriber of The Junia Project blog. You can subscribe by entering your email in the column to the right of this post! Malestrom is available June 2 through Amazon. 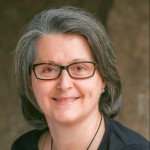 Dorothy Littell Greco writes for numerous Christian publications such as Today’s Christian Woman, Gifted for Leadership, and Relevant. She is a member of Redbud Writer’s Guild and is currently writing her first book. Follow her on Facebook or Twitter or click on her name to visit her website.