How to Be Egalitarian with a Complementarian Spouse

Well, you cry a lot, sometimes, especially in the beginning.

You sit opposite each other on the kitchen floor and joust back and forth with “Well, how come we care about the prohibition of women teaching but not women wearing gold jewelry?” and “Well, despite Jesus being so countercultural in his treatment of women, why were The Twelve all men?”

“Read these,” he says as he hands you heavily-footnoted position papers he received at presbytery — you mark them up furiously. You give him articles from Christians for Biblical Equality and Junia Project and he does the same.

You both get mad and accuse the other of not being the person you married.

You get into theological fistfights.

You assume the worst of each other.

And you scream, out-loud or in your heart or both.

Valid points are made on both sides. Both of you “win” some rounds and get the other to say “I can’t refute that.” And you feel smug. And then you feel crummy for feeling smug.

Sometimes you just have to give it a rest. You live life. You ask God to intervene according to God’s will and timing and you hang up your hat as best you can.

You find a few good friends who are further along on this journey than you are; ask for their advice. If you don’t have these friendships in real life, they can be developed on social media. You’re not the first person to have this marital struggle, and it helps just knowing you’re not alone.

When you find common ground you cherish it.

For us, we agree the Church needs to do a better job of encouraging women to use their gifts (we disagree on what this looks like). We also agree our marriage has always been egalitarian, though we wouldn’t have always used that word. I don’t submit to my husband more than he does to me. We’ve always split domestic work up nontraditionally (he’s the chef and is always on top of dishes and laundry…I, well, I eat his food and make sure there’s plenty of dishes and laundry to do).

You tell him he’s not a woman and cannot appreciate this debate beyond an academic level. He says that’s true.

You tell him this is not just about hermeneutics but about how God sees you — you tell him it’s personal and it hurts and he’s privileged in the Church and you’re not. He nods.

He says sometimes he wishes he were an egalitarian — it would be so much easier! You note his internal battle, while nearly being bowled over by your own, and you sigh together. Today you are thankful to be heard if not fully understood.

You pray about it.

You tell Jesus you’re worn out and confused and it’s not fair.

He says He knows.

He says He loves you.

He says He sees you as a full person like you always hoped but never truly knew until you became an egalitarian.

Conversations slowly evolve. You gently tell your husband that his jokes about “girl power” are offensive because in so many places in the world — including American churches — girls do not have power. You dialogue about women’s rights, about Bible translations, about seminary days, about questions unanswered.

You both make each other think.

You talk about how great it is that your pastor-husband now works in a church with female elders and you try to hide your smile when he tells you that all the best elders in the session are women. You tell him how much you appreciate it when the senior pastor, his boss and the father of five girls, says “fishers of people” instead of “fishers of men” while preaching.

You watch him talk to his two-year-old daughter and tell her that she can be anything she wants to be when she grows up, and you know he means it. You know he struggles with his accepted exegesis and his desire for his feisty daughter to pursue her dreams freely. You think about your daughter’s name – Phoebe – and ponder what seed God could be planting.

You’ve ranted and raved, fueled by a passion that is good and right, but you’re humbled now to admit your partner still disagrees with you.

You commit to do more praying and less badgering.

You stop acting like you know everything (or that he knows nothing).

You recommend resources that helped you, and you let him say yes or no freely.

It turns out that diving into a complex subject with your spouse goes over a lot better when you are level-headed and willing to listen and talk about one thing at a time (instead of throwing the kitchen sink of biblical equality at them).

And you grapple with the truth that people are not easily put in boxes.

It’s not complementarian = evil and egalitarian = good. It’s never been that simple.

You respect some leaders and scholars of both persuasions. You, in many ways, have the advantage of a unique perspective: you know that while some complementarians are extremists, most are good people who are devoted to the authority of Scripture and aren’t sure why the Bible seemingly bars women from ministry.

Your spouse similarly knows that while some egalitarians take the Bible less seriously, most hold dearly to their belief in the Bible’s inerrancy; they simply exegete it differently. It’s so easy to vilify “the other side,” but you and I know better. We’re married to the other side! And we know their humanity as they know ours.

As time goes by, you reflect on your growth as a couple. You had a conversation about women in leadership and no one suffered an aneurysm! That’s worth celebrating!

You champion each other.

You write for the Junia Project at your complementarian husband’s encouragement, and you even take his suggestion to explore the complexities of a “mixed marriage.” You email him your piece and he writes back “LOVE IT!”

And you take some wisdom for the road.

My friend Rachel gave me this advice a year ago and I carry it with me still:

“Just as we don’t change sin patterns overnight, we don’t leave behind old thought patterns & beliefs that quickly, either — and sometimes ever! It’s an inside job…mutual leadership begins with mutual submission — we love and respect and move with strong patience, and we wait on the Lord to change hearts.” 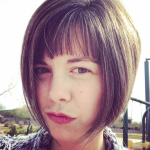 Halley is an RN and lactation consultant who lives in the Phoenix, AZ area with her pastor-husband and two little ones. She loves writing memoir pieces and essays about social justice issues. She "converted" to egalitarianism last spring (greatly aided by The Junia Project blog) and has never felt more loved by God. She enjoys crunchy mama stuff and dreams of running for public office.