An argument often brought up in discussions about women in church leadership is that Jesus’ twelve apostles[1] were all male, and, because there were no females among the Twelve, this means that women cannot be church leaders.

This argument is usually countered with the fact that, as well as no women, there were also no Gentiles among the Twelve, so if we genuinely want to use the Twelve as a paradigm of people suitable for church leadership we should restrict leaders to Jewish men.

I find neither of these arguments useful in discussions on church leadership because they miss a critical point: Jesus’ earthly ministry occurred before the Church was in existence.

Jesus’ ministry occurred at a vital juncture between the Old Testament and the New Covenant – between “Israel only” and the inclusive, universal Church.  The New Covenant had not yet been inaugurated when the Twelve were called.  And so, at that time and at that place (Israel), Jesus chose twelve Jewish men to be his first disciples.

The Old Testament, Israel, and Patriarchy

There is an obvious symbolism with the number twelve.  Jesus himself makes a connection between the twelve disciples and the twelve tribes of Israel (Matt. 19:28; Luke 22:29-30).  Jesus may have chosen twelve as a way of showing that his message, ministry, and New Covenant was for all of Israel.  When Judas died, his place was filled to keep the number of the apostles at twelve.  But once the New Covenant had been inaugurated, and when the church age began with the coming of the Holy Spirit at Pentecost, and as more and more Gentiles joined the church, the significance of the Twelve was no longer relevant.  After the death of James (Acts 12:1-2) there was no attempt to replace him in order to keep the number of apostles at twelve.

Jesus chose Judas Iscariot to be one of the original Twelve, presumably knowing that Judas would later betray him (John 6:64, 70-71).  Since Judas Iscariot was one of the Twelve, this makes the argument untenable that Jesus intended the Twelve to be some sort of precedent or paradigm for church leadership.  The fact that one of the Twelve later betrayed Jesus and never became a church leader is an important point to consider.  But there are other factors to consider in the argument that the all-male Twelve means that women cannot be church leaders.

The Twelve assisted with Jesus’ healing and teaching ministry to the Israelites (Matt. 10:5-6 cf 15:24).  It is inconceivable that the Jewish people would have accepted ministry from Gentiles. And due to the poor status of women, there would have been considerable difficulties for Jewish people to accept healing and instruction from women.  Jesus began his earthly ministry while the Old Covenant was still operative; and the curses of the Fall, which included the rule of men over women, were still in effect (cf Gen. 3:16b).

Nevertheless, while there were no women among the Twelve, there may have been a few Jewish women among the seventy-two (Luke 10:1ff).  And we know that women traveled with Jesus and the Twelve and supported the ministry from their own resources (Luke 8:1-3).  Many women were among the most faithful of Jesus’ disciples.

The New Covenant, the Church, and the Holy Spirit

Once Jesus had fulfilled all the requirements of the Old Testament with his death and resurrection, the old rules and restrictions became obsolete.  No longer were disciples to be only Jewish.  Jesus commissioned his disciples to make more disciples from every nation (Matt. 28:19 cf Acts 9:36).  These other disciples included Gentiles and women.[3]

Gilbert Bilezikian has pointed out that:

“The great paradigm shift from old to new covenant did not occur at the beginning of Christ’s earthly ministry but at its end (1 Cor. 11:25). History turned upon itself with the death and resurrection of Christ and with the subsequent coming of the Spirit at Pentecost. The first utterance made immediately after the outpouring of the Holy Spirit concerned a radical change in ministry roles. With the apostles at his side, Peter formally proclaimed that, because of the new era inaugurated by the coming of the Spirit, ministries that had been previously restricted were now universally accessible to all believers without distinctions of gender, age, or class.”

Jesus treated women with a degree of dignity, intelligence, association, and genuine brotherly love that was rare in those times.  True equality would have to wait for Pentecost, however, when the Holy Spirit was poured out for the first time on all believers regardless of gender.

Having said that, we do have the example of a New Testament woman who was an apostle – Junia (Rom. 16:7).  Moreover, the New Testament gives us several examples of women who functioned in various leadership ministries in the early church, including being pastors and leaders of house churches.[4]

Some denominations teach that the Apostles functioned as priests and that subsequent church leaders also function as priests.  Under the New Covenant, however, there is only one priest – Jesus Christ our High Priest and Mediator.  There is no need for any other mediator between God and his people (1 Tim. 2:5).  The New Testament never refers to apostles or any other church leader as priests.[5]

All Christians are agents of Jesus Christ by virtue of his Holy Spirit who lives within us, and we are all members of a royal priesthood.  As members of this priesthood we are called to collectively, and individually, proclaim the gospel to those who have not heard.[6]

The fact that the Twelve Apostles were all male cannot be used to bar women from leadership ministries for several reasons.  Jesus called the Twelve before the New Covenant had been inaugurated and before the Holy Spirit had come on all believers.  He chose the Twelve to help with his ministry to Israel within a certain cultural context.  The fact that Judas was one of the Twelve means that Jesus must have chosen at least some of the Twelve for reasons other than church leadership.   The “Male Apostle” argument cannot be taken to mean that women cannot be pastors or evangelists, etc.  It might be taken to mean that women cannot be apostles; however, the example of Junia as an apostle makes even this argument untenable.   Moreover, Jesus never stated that only men could be leaders.  Jesus’ only instructions about church leadership are that those who lead in the Christian community should be servants, not rulers.[7]  The fact that Jesus’ Twelve Apostles were all male is not a valid premise to exclude godly and gifted women from any kind of ministry function or role in the Church.

[1] The Twelve are only infrequently referred to as apostles in the gospels: “only once in Matthew and Mark, not at all in John, and five times in Luke . . . Many scholars [e.g. W. Schmithals (1969:98-110)] in fact argue that Jesus did not at any time call the twelve ‘apostles’ during his lifetime.”  Kevin Giles poses the question, “Did Luke introduce the title ‘apostle’ in his role as editor of the historical sources he used, or was it already there?”  Patterns of Ministry Among the First Christians by Kevin Giles (Collins Dove, 1989) p. 155, 157.

[2] “To the present day among orthodox Jews the quorum for a synagogue congregation is ten free men; unless ten such males are present the service cannot begin.” F.F. Bruce

[3] Tabitha (Dorcas) is a woman identified as a disciple (Acts 9:36ff).
Jesus discipled women.  Mary of Bethany sat at Jesus’ feet – the posture and position of a disciple – listening to his teaching.  Jesus said that “few things are needed—or indeed only one.  Mary has chosen what is better, and it will not be taken away from her.” (Luke 10:42.)

Philip’s daughters (Acts 21:9), Phoebe (Rom. 16:1-2), Junia (Rom. 16:7), Euodia and Syntyche (Phil. 4:2-3) and probably Lydia (Acts 16:40), plus others were New Testament women with significant Christian ministries and which probably included house church leadership. Just as there have been good and bad male leaders, there were good and bad female leaders. Sadly, the church in Thyatira was being corrupted by the teachings and false prophecies of a wicked and immoral female leader (Rev. 2:20-24), as was the church in Ephesus (1 Tim. 1:3-4 cf 2:12). [My series on 1 Timothy 2:12 in Context here.]

[6] Paul refers to his ministry as “priestly” once; but he says this in the context of proclaiming Christ to the Gentiles – to those who do not know him (Rom. 15:16 cf 15:20).  Christians should rely primarily on God, and not a person, for their forgiveness, comfort, and guidance, etc.  I do not believe that church leaders are called to represent Christ to people who already know him.

Why Jesus Chose Male Apostles from Community 101, p74-80, by Gilbert Bilezikian.
Why Were All the Apostle Men?   by Joseph Tkach. 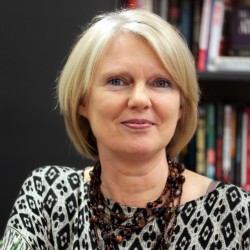 Margaret Mowczko
lives just north of Sydney, Australia in a house filled with family. She is VP of the Sydney chapter of Christians for Biblical Equality, and she writes for her website newlife.id.au. Marg strongly believes that if we are in Christ we are part of the New Creation; a community where the old social paradigms of hierarchies and caste systems have no place (2 Cor. 5:17; Gal. 3:28). She is currently completing her M.A. in Early Christian and Jewish Studies at Macquire University.