I walked into the room.

I was ill equipped for exposure to the below freezing elements outside, immediately thankful for the rush of warmth that greeted me as I crossed the threshold. It was my first Christmas party of the season, and I was still trying to rally my enthusiasm for the return of the season of high-heels, patterned tights and red-lipstick, especially when I wanted nothing more than a cup of hot tea, an over-sized sweater and a good book by the fire.

The counter boasted a beautiful spread of holiday delicacies as ladies, dressed to the nines, simultaneously relished and bemoaned all the sweet treats calling out to them while they caught each other up on the last 6 months of life flown by.

She was lovely, a school teacher for impressionable third-graders, and every bit as gracious as you would hope for the person caring for your child. She asked me what I do for a living vs. what I do in my dreams, and we discussed matters of passion and vocation.

Eventually the topic of church came up and we discovered that we used to be a part of the same congregation. When I asked her why she left, she expressed, in very simple terms, that she didn’t feel like there was a place for her there as a woman.

She shrugged as she offered in complete graciousness, “there was no representation and no invitation.”

I stood there for a moment as I processed what she had just shared. I think her statement probably garnered a gesture of concession in the form of a raised eyebrow and tipped head. “Touché!”, I thought.

Initially, I was stunned that someone whom I’d never previously met, who knew nothing of my opinion on such matters, would offer up such a pithy assertion. But what made my tongue stick in that moment was the realization that while I really wanted to be able to say her response surprised me, I actually, unfortunately, could not.

What strikes me most about this story is that if judged on the basis of appearances, one might be compelled to assume she would have felt right at home within a complementarian climate. Soft-spoken, though articulate; she worked with children for a living, was kind and maternal. Of course she would gravitate toward the more support-oriented ministries [if-you-will], such as hospitality, prayer, or perhaps children’s or women’s ministry. She was a woman after all.

But please hear me on this.

To make this assumption would be to rob her of her personal, robust womanhood, which is not strictly linked to gifts that fit into a “maternal” construct.

To make this assumption would be to cast a pale, two-dimensional portrait of a strong, dynamic, educated and intelligent, multifaceted woman.

None of this is to say for a moment that any of the above categories of care are less than, or nonessentials; or to imply there is, or ought to be, a hierarchy among positions within the church [simply read 1 Corinthians 12]. All of them represent beautiful and vital contributions to the overall health and thriving of the congregation!

But perhaps she wanted to be equipped to teach? What then? What of the women who are gifted in academics, or public speaking, or music leadership, et cetera; who long to use their gifts within the context of the church. What of them? We do a significant disservice to the body by limiting the areas in which women [and men, for that matter] are considered competent to serve and utilize their God-given talents and passions.

Now, I’d like to zoom out for a moment.

In the ongoing debate regarding issues of gender within the church the messages often get muddled and convoluted; like we’re all asking, if not demanding, something different while insisting we’re actually saying the same thing. As a result, I think those in leadership often feel at a loss as to where to begin, and honestly, I get that.

And yet, only on very rare occasion have I ever heard it asked,

“Okay, so what exactly is it women want from the church?”

We could all offer up our own individualized appeals in an effort to answer this question, and we do. My Twitter feed (like this blog) is chock-full of pleas from those of us trying to explain why women often feel minimized, disregarded, not represented or invited; and all that the church ought to be doing to straighten it out. But if we could cut through the white noise for a moment, I think we would find the overarching answer is simple:

At the end of the day, we simply want this: to be asked the question.

Rather than ushering us off to the nursery before learning that we have absolutely zero knack with or passion for children, or assuming our appropriate role is on the coffee or hospitality team before realizing that we can’t even boil water; ask us the appropriate questions before stuffing us into a mold that quite frankly doesn’t fit.

The questions are simple:

“What are your God-given, Spirit-breathed gifts?”
“What makes you come alive?”
“How can your great gifts meet a great need within the body and broader community?”

And then, perhaps even more importantly:

“What can we do to equip you, as an image bearer, to fulfill your calling; to optimize your gifts for the sake of the Kingdom? “

When these questions go unasked a glass ceiling is unintentionally established; one that requires brute force and an exhaustive amount of persistence to break through simply to be heard, let alone listened to. And the damage is two-fold: a vast majority of incredibly gifted and capable women will never make it to the front lines because they are not willing to scream in the faces of men to be heard, and those who do are likely to be perceived as aggressive, obnoxious, or even ill equipped.

This is a tremendous shame, because had they been engaged from the beginning on the basis of equal merit with their male peers, I believe the results would be astounding.

If the assumption was that there were no assumptions to be made; that every person is his or her own, bearing the mark of the Creator uniquely in the way that only he or she can, we would have a much more adequately equipped army.

I can’t help but wonder what my friend at the Christmas party might have said if she’d been asked the appropriate questions.

I can’t help but wonder how her contributions might have enriched our community. Unfortunately for us, it will be another congregation that reaps those benefits.

The good news has not changed, my friends. It has always been, and will always be about the Kingdom of God coming to invade earth, setting the oppressed free. And if we, as the children of God, are going to accomplish this in tandem with the Spirit, we’re going to need everyone fully engaged in the mission, all utilizing his or her gifts in full measure.

Let us not be deterred.

Rather, let us begin with intentionality, granting our sisters a voice. Let us begin by asking the question. Let’s recognize the value of representation and invitation for all of God’s children. 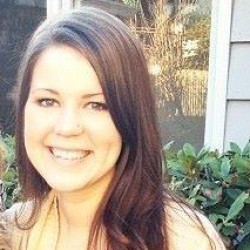 Cayla Pruett
Cayla Pruett is a northwest native, who true to her roots, takes her coffee black, her bread sans gluten and her wine crimson. An ever evolving Jesus feminist, she believes in communion as a way of life and that there is more than enough room for everyone at the table. Although naturally an introvert, you can steal a glimpse into her thoughts by connecting with her on Twitter or on her blog www.ccpruett.wordpress.com