I was out to coffee with a friend and we were discussing gender equality in the church, or the lack there of.

Recently, I went through the membership process at my own church. It’s a newer establishment still finding its bearings, and rooted within the Evangelical Church. I grew up nondenominational and find it ironic that I wound up at a church that identifies with a denomination notorious for its lack of gender equality.

In the membership course, what is referred to as “secondary theology” was briefly discussed (albeit with a 10-foot pole mentality) specifically, the theology of gender roles. The short and skinny of it: I attend a church that believes there are certain roles meant solely for men; teaching, eldership, the usual culprits. But men and women are still equal, even though, you know, they can’t do the same things.

So my friend asked, “Why are you at a church that doesn’t support the equality of both men and women?” She was hinting, fearfully, that I was okay with it, or worse, passive.

My answer? It’s complicated. But here are a few of my reasons:

Rome Wasn’t Built in a Day­

Instilling gender equality into the church won’t be complete until Jesus comes, which means we’ve got a lot of work to do. And sometimes that means staying in a church that doesn’t look ripe for change. It can be discouraging, but I’ve come to the conclusion that I’m not in this for me, but for the future of my children, and their children, and so on. Change takes time. We’re talking about hundreds of years of patriarchy that we’re trying to undo. It’s not going to all unravel in an instant.

Every Church Needs an Advocate

If you’re not willing to question, petition, pray, and converse with your pastor, elder board, and the church body, then you’ll never see change. Sometimes God asks us to step into a space in order to create change. And in this case, the space might be a church that isn’t ready to move in the direction of gender equality. And that’s okay. God might have you in a place that’s full of possibilities, and open your path when the time is right.

I’m Not the Only One

When it comes to advocating for gender equality, I’m not the only one. There are plenty of people attending my church, men and women, who believe that the Gospel does not limit your abilities based on gender. I’m not the only one who believes the Kingdom is opened wide to everyone, to preach, teach, lead, and pray; no matter your genitalia.

I haven’t yet seen any woman or man asked not to serve based on their gender. And until then, there’s no reason to leave.  When someone is harshly denied the opportunity to do what God has called them to do for the sole sake that they are not the preferred gender for that role, then and only then will the consideration to leave truly be there for me.

Their Theology is Sound

The meaty stuff, the Jesus stuff, it’s there. They preach that Jesus was the Son of God, was crucified on the cross for the sins of the world, and rose again three days later. And there is so much hope in that.  I can still worship my God at a church where men and women aren’t necessarily equal. Jesus doesn’t change for me because of that.

Change calls for different things from different people. For some, it’s staying behind, advocating, and stirring up conversation. For others, it’s taking a stand by leaving.

Staying with a church that doesn’t see eye-to-eye with me on the role of women doesn’t make me passive, nor does it reflect my views of gender equality in the Kingdom. It’s opportunity. It’s a chance to stand firm, to speak up, to be gracious, to reflect Jesus. God has put me in a unique place and may have you in a unique place too. Don’t deny yourself the opportunity to step into a space and create change.

For an interesting discussion on this topic, read through the comments on Sarah Bessey’s post Should an Egalitarian Attend a Complementarian Church? 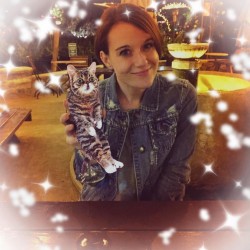 Lizzy Harford
is a writer, muser, and feminist for Jesus. When she’s not making friends with cats, she’s writing for her blog, https://thatspiritedlife.com. Click on LIzzy's name to visit her blog.

is a writer, muser, and feminist for Jesus. When she’s not making friends with cats, she’s writing for her blog, https://thatspiritedlife.com. Click on LIzzy's name to visit her blog.