Movements begin when a tipping point is reached–when enough people change both their thinking and their practice. Currently there is a groundswell of interest in the role of women in the Kingdom. Theologians are studying it, authors are writing books, conferences have been convened. What is going on?

It appears that God is up to something. A huge potential for movement exists when men and women synergistically co-labor together for the Kingdom. Could this be one of the next moves of the Holy Spirit? When twelve women came together for a weekend to discuss this issue, the Lord made something very plain: we were not to go it alone.

As we studied the story of Barak and Deborah, we realized that we needed men with us – that if we tried to do something as a group of women, we would be perceived as feminists with an axe to grind. But if men stood with us, there would be potential for a Kingdom movement.

So when we decided to write a book, we asked several men to contribute. We are so grateful that they were willing, like Barak, to go into battle with us. The end result was The Black Swan Effect: A response to gender hierarchy in the church. This brief excerpt from the introduction explains the analogy of the black swan:

The term “black swan” was common in sixteenth century London. Everyone knew swans were white, and black swans presumably did not exist, so the term came to mean something farfetched, not real.

However, in 1636, a Dutch explorer discovered nomadic, red-billed black swans in Western Australia.

All of a sudden, black swans were no longer an impossibility, and the meaning of the term changed from something farfetched to something once thought of as farfetched, but now known as reality.

“When the phrase was coined, the black swan was presumed not to exist. The importance of the simile lies in its analogy to the fragility of any system of thought. A set of conclusions is potentially undone once any of its fundamental postulates is disproved. In this case, the observation of a single black swan would be the undoing of the phrase’s underlying logic, as well as any reasoning that followed from that underlying logic.”¹

Today, there is a well-known species of black swans. All it took was one black swan to change people’s minds forever.

In 1954, British runner Roger Bannister proved it only took one person to break the goal of a four-minute mile (3 minutes, 59.4 seconds). Athletes had been attempting to break the four-minute barrier for years, and it was said to be a physical impossibility for the human body…once Bannister proved it could be done, many other athletes subsequently broke the barrier and it became a new standard for male professional middle-distance runners. Amazingly, the record has since been lowered by almost 17 seconds.

Why then, does much of the church world dismiss biblical examples like Deborah, the prophetess/judge who presided over Israel for 40 years?

Why is it considered an anomaly that a church met in Lydia’s home, Junia was an apostle, a group of women were the first to see and announce that Jesus had risen from the dead, or that Queen Esther saved her people? These remarkable women are often relegated to the sidelines by commentators who say they were exceptions, not normative, or not the standard God has for women.

But all it takes is one example—one black swan—to know, by the grace of God, a thing exists. And if there is one, there could be many.

The conversation about gender is rapidly gaining traction in church circles. It’s as though the Holy Spirit is firing up interest across the church spectrum. This isn’t a move of angry women trying to right the wrongs of the past. It’s a rising tide of both men and women who long to see God’s mission on earth accomplished, and who recognize that God himself is fulfilling his Word:

“There is no longer Jew or Gentile, slave or free, male or female. For you are all one in Christ Jesus.” (Gal. 3:28 NIV)

Could this be one of the next major moves of God? Could the release of women into the Kingdom workforce help to usher in the end-time harvest?

YOUR TURN: How do you see the black swan effect impacting the Church today? Would you agree that there is a groundswell of interest in the role of women?

The Black Swan Effect: A Response to Gender Hierarchy in the Church was just released on Amazon. Felicity coordinated the efforts of fourteen authors to create a broad-sweeping look at gender roles in the church. A majority portion of the sales proceeds goes towards training and supporting the efforts of women church planters in developing nations. Read more from Felicity at simplychurch.com. 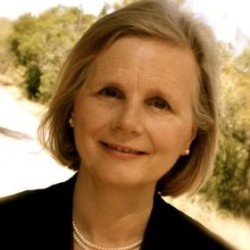 Felicity Dale
Felicity moved from the UK to Texas with her family in 1987. She is best known for producing resources for simple/organic/house church movements around the world. Felicity is the author of An Army of Ordinary People, and co-author of Small is Big! Her most recent book, The Black Swan Effect explores women and men working together in the Kingdom. She blogs about women in ministry at simplychurch.com.